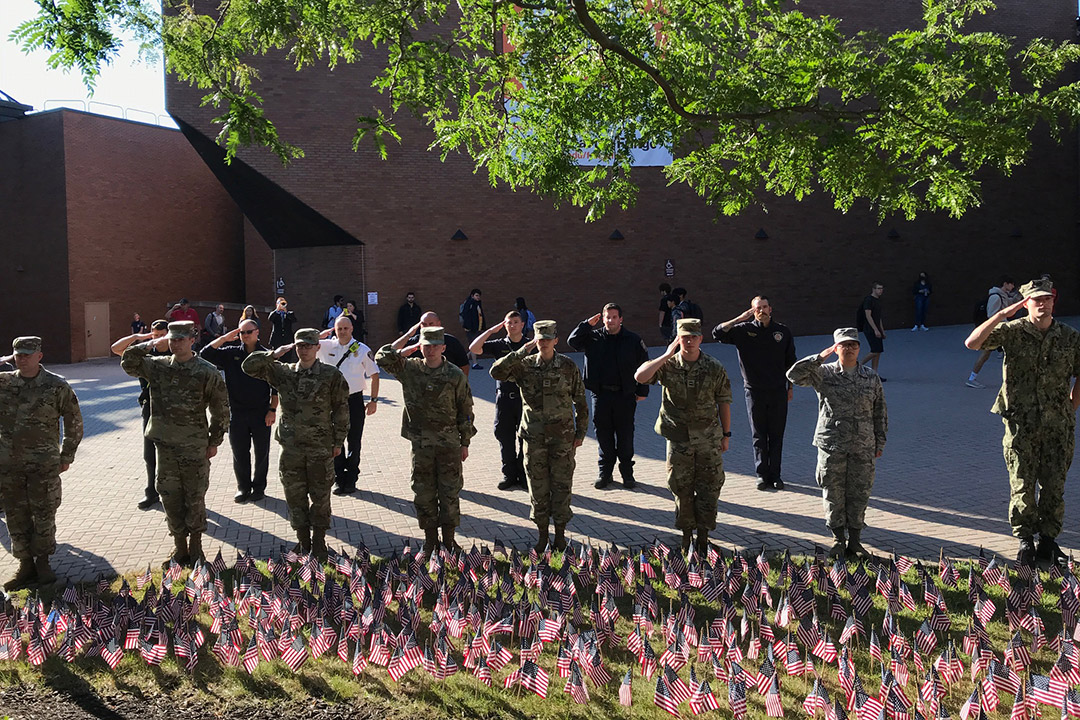 The Army and Air Force ROTC programs remembered 9/11 victims during a ceremony Friday morning on campus.

I’ve never forgotten how incredibly deep blue the cloudless sky was on the morning of Sept. 11, 2001, as I walked into my facility. As the senior Federal Aviation Administration official in charge of the busiest air traffic control facility in the world, I expected a routine Tuesday in the national airspace system. In less than an hour, everything changed. 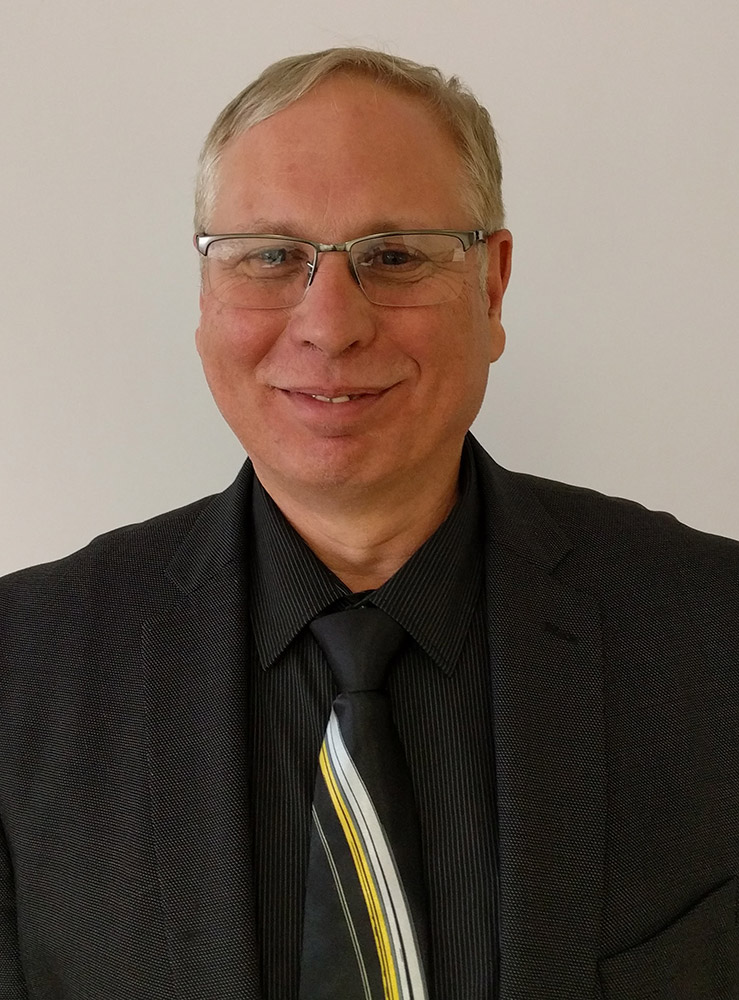 I followed my routine of checking with my office and then proceeded into the radar control room of Cleveland Air Route Traffic Control Center to say good morning to my folks and to assess the day ahead. Something was odd this morning, however, as my controllers were suddenly unable to transfer any eastbound aircraft to New York or Boston Center. We soon learned that Boston controllers had lost an aircraft, and rumor had it that a small aircraft had flown into the World Trade Center.

I left the control room as to not be a distraction and walked into the cafeteria to get a cup of coffee. While observing the television coverage of the fire and smoke emanating from the north tower, I saw a United Airlines jet fly into the south tower of the World Trade Center. I immediately ran to my office to call my wife, Janet, and then ran into the control room.

Seeing the need to support my operational team dealing with the chaos and crisis at hand, I established a command post in the control room. I dialed into a teleconference with headquarters, and my peers in New York, Washington, and Boston. We were joined by members of the military and other intelligence agencies who would or could not identify themselves.

I alerted my team to observe any unusual aircraft actions, strange pilot requests, and to pay close attention to aircraft that met the profile of the now three missing or suspected hijacked aircraft. The targets appeared to be large airliners flying cross country, hijacked shortly after departure, and loaded with fuel.

When we heard the horrific cries of pilots fighting hijackers as they took over the cockpit, we reacted quickly. Veteran controller John Werth worked masterfully with his peers to identify which aircraft had been taken over and moved other aircraft safely out of the path of Flight 93. I listened to the chilling commands of the terrorist directed toward the passengers, not realizing he was speaking with air traffic control.

For the next 25 minutes, I shared the hijacker’s commands and Flight 93’s navigational status with constant updates on that teleconference, as we scrambled to find a way to intervene. My communication updates were necessary because the hijackers had turned off the transponder of the aircraft, and I was the only person who had the ability to follow the intermittent radar target.

West of Cleveland, Flight 93 abruptly turned southeast toward Washington, and began to descend. In my observations and reporting, I then witnessed one of the most heroic acts in our history.

Flight 93 departed late from Newark that morning, and we now know that the passengers became aware of the fate of those other aircraft from phone conversations with their loved ones. As the aircraft passed over Pittsburgh, the aircraft transponder reappeared for a split second, allowing me to see an altitude readout. Flight 93 had descended from 39,000 feet and was now only 4,000 feet above the mountain ranges.

Then I began to see the aircraft make radical turns in the sky, first to the north and then to the south, and finally circling to the east when the radar target disappeared from my view. I feared that the aircraft had descended below the mountain range and had impacted the ground. Hearing reports from airborne aircraft of smoke in the area, I directed a controller to send a military C130 over Shanksville, Pa., to confirm what I suspected.

What I had witnessed was the struggle of the heroic passengers to reclaim control of their aircraft. They had knowingly sacrificed their lives to prevent the terrorists aboard their aircraft from meeting their goal. There was no time to reflect, however.

As I was focused on my responsibilities of tracking Flight 93, my team and I were engaged in conversations to seek military intervention and with concerns of other potential terrorist risks to other aircraft. HQ agreed with that assessment and the order was given to shut down the national airspace system. This meant directing every airborne aircraft to land at the nearest airport as soon as possible.

There was no contingency plan ever devised, practiced, nor rehearsed to accomplish this task.  Within 45 minutes and with the cooperation of the pilots, airlines, and airport authorities, the FAA controllers landed 4,500 aircraft without delay, an accomplishment I am very proud of my team for. As if that wasn’t enough excitement, local law enforcement observed a small aircraft flying over the center, which necessitated my decision to evacuate the facility except for a few controllers and managers.

There were many lessons learned for our country on 9/11. Many of us provided testimony to the congressional sub-committee. We learned that it could have been prevented if critical information was shared within the FBI and the intelligence community. Government agencies such as the FAA and the military needed to have the capability for an immediate coordinated response.

Our worldview was shaken with the fact that the actions of a few people with perverted ideology and little care for humanity could diminish our sense of security and freedom. Every trip to the airport with its TSA protocols and the reach of Patriot Act legislation is a sobering reminder of the long-term damage that was inflicted.

What I’d like you to know about that fateful day are the stories of unexpected heroes and acts of compassion and leadership that made a real difference in a time of desperate need. The selfless actions of the firemen, policemen, and rescue workers who charged into those burning towers in New York City. The people living in the small towns like Gander and St. Johns, Newfoundland, who fed and housed hundreds of passengers from European departure aircraft stranded when American airspace closed. They were unable to turn around due to minimum fuel and were forced to land at small airports along the Canadian seaboard.

I’ve shared with you my eyewitness account of the bravery of those passengers and crew on Flight 93. You might have read about the words shouted by passenger Todd Beamer, “Let’s roll,” as they charged the cockpit. Their actions may have well prevented other loss of life as happened in New York City and at the Pentagon.

I had the privilege to get to know Todd’s brother-in-law, Doug MacMillian, who served as a representative of the families of the passengers aboard Flight 93. Doug and other dignitaries such as Ohio Senator Sherrod Brown joined me in the dedication of a sandstone memorial at Cleveland Center in June 2002. It serves as a daily reminder to the heroism of the crew and passengers as well as the accomplishments of all the Cleveland Center employees that day.

During a recent interview I did for the History Channel, the Flight 93 audio recording was replayed in my presence. Hearing Lebanese hijacker Ziad Jarrah’s voice again rendered me momentarily speechless, but his cowardly actions won’t ever diminish the bravery of those passengers aboard Flight 93.

As we approach the 20th anniversary, the History Channel is airing “The Four Flights,” which I and several of my peers contributed to. I have accepted an invitation to speak at the Flight 93 Memorial in Shanksville, Pa., as part of the 20th anniversary observation. It is a trip I have been reticent to make.

I served proudly as a civil servant in the FAA for 33 years, starting my career two miles from the RIT campus at Rochester Tower. On this extraordinary and horrific day 20 years ago, civil servants admirably honored the oath they took to serve our country.

I will never forget how incredibly blue the sky was that morning!

Rick Kettell ’84 (logistics and transportation management) is a retired Federal Aviation Administration senior manager. He currently works as an instructor/facilitator for the Federal Leadership and Learning Institute teaching FAA managers a variety of subjects, from labor management relations to various leadership classes. In 2001, he was the air traffic manager at the Cleveland Air Route Traffic Control Center, which at the time was the busiest air traffic facility in the world. Kettell was the first air traffic controller hired at Rochester Tower after the strike of 1981.