Their work on campus, in the community and abroad cited 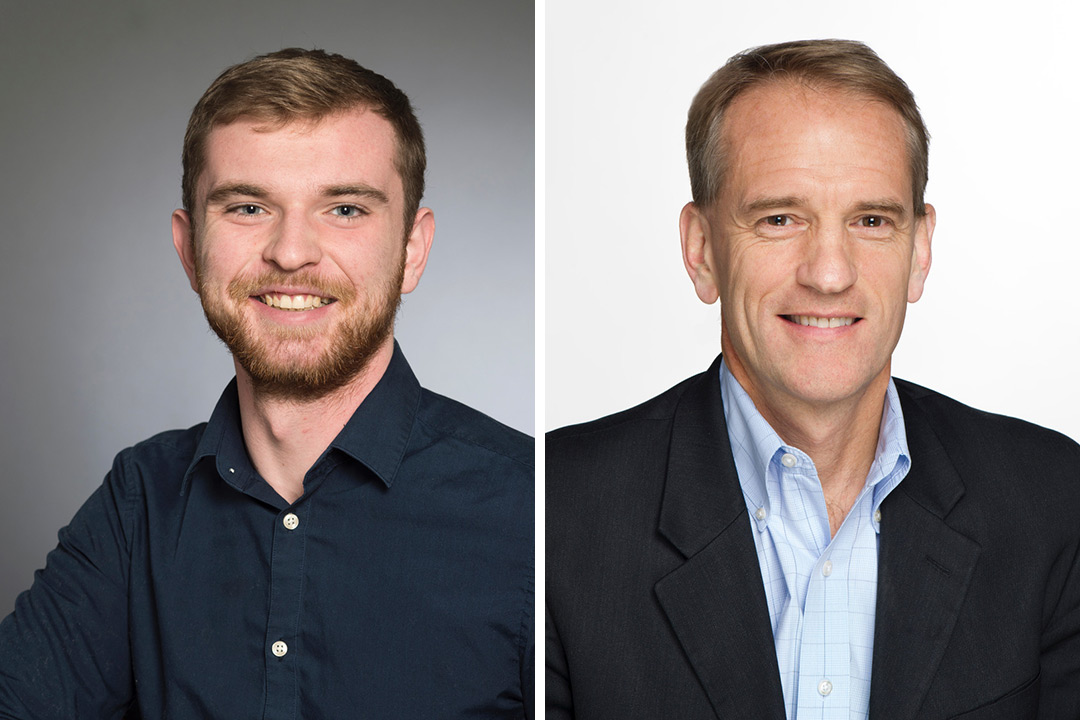 A dedicated Rochester Institute of Technology administrator who helped expand RIT’s global presence as well as being an active community volunteer locally and in Haiti, and a graduating student leader who has been engaged in public service, Student Government and environmental stewardship, have been named winners of this year’s Alfred L. Davis Distinguished Public Service Awards.

The awards will be given at a public ceremony at 4 p.m. Wednesday in University Gallery in Booth Hall.

Myers joined RIT in 1988 as an instructor in the School of Food, Hotel and Travel Management. He left RIT to obtain his doctorate in natural resource economics, and returned in 1999, when he became the first academic associate dean of RIT’s American College of Management and Technology in Croatia, and later professor and director of the Center for Multidisciplinary Studies. He currently is associate provost of International Education and Global Programs.

Myers has been an active community volunteer for more than 30 years. He is chairman of the board of directors for Haiti Outreach Pwoje Espwa (H.O.P.E.), a nonprofit organization that supports health, sanitation and economic development in a rural community in northern Haiti.

He also has been an active member in a marathon training program for the Leukemia and Lymphoma Society of Western New York.

“Jim is widely recognized and highly respected across all of RIT’s campuses,” said International Student Services Director Jeffrey Cox in one of the nominations for the award. “Jim does not engage in any of these efforts for personal recognition or advancement, but is a true believer in trying to make the world a better place. He has a very big heart, but also applies a sharp intellect and creative and highly collaborative approaches to bringing about concrete solutions to vexing social issues – particularly in areas of the globe that are struggling to recover from war or natural disaster.”

Myers said winning the award is “humbling. I was honored to be nominated. I never imagined I’d ever receive it. I do this work because I love it, and the work itself is the reward I receive. That is why I do it.”

He also credits RIT for being “so supportive and generous for recognizing community service work.”

Myers will receive $2,500 as part of the award. He plans to give $2,000 of it to HOPE, and split the remainder between the Leukemia and Lymphoma Society and Cancer Wellness Center.

Moakley, who serves as president of RIT’s Student Government, has been an avid participant in leadership and community service projects. Last month he participated in RIT’s Alternative Spring Break, traveling to Florida, where his group did disaster relief from Hurricane Michael and helped with coastline reparations.

Kaitlin Stack Whitney, visiting assistant professor in the Thomas H. Gosnell School of Life Sciences, submitted a nomination for Moakley, saying he used project opportunities in her class “to learn more about Rochester’s environment and human communities. He is a thoughtful and engaged student who wants to learn more about the world around him and seizes those opportunities. This work connects to his goals as a student and future professional – he works at the intersection of environmental and social justice issues.”

Moakley also has been a pioneering member of Into the ROC, an RIT program that connects students with city communities, learning experiences and service opportunities.

“Bobby is motivated by what connects people and changes the world,” Stack Whitney said. “He does so much community service to and for RIT because he’s committed to the campus people and to making this the best campus experience for everyone, not just himself. He clearly enjoys getting to think and do with so many people around campus—students, faculty, staff and administrators. Being a collaborator and succeeding at it, as a true peer—with those diverse teams helps remind him that he can do anything once he graduates.”

David Bagley, assistant vice president for Student Affairs, said Moakley, as Student Government president, “has already tackled several campus issues and has created a collaborative culture and positive environment. His personal experiences and passion for the Rochester area have greatly impacted his endeavors as an agent of public service. He truly understands the importance of public service and constantly identifies avenues/platforms to promote and assist others along his journey.”

He said Moakley’s passion for helping others and his natural abilities as an influencer “positively encourage other students to engage in public service. … I hold Bobby in the highest regard as he is always a role model to others in our community and exemplifies what a great student leader should be. We are lucky to have Bobby on our campus. He continues to be a strong voice and a positive change agent.

“It’s such an honor to receive this award and to be recognized for some of my public services,” Moakley said. “It further encourages me to continue serving the community and contributing my skills to those in need.”

Moakley will donate the $1,000 he earned from the award to the Ibero-American Development Corporation, which renovates and manages buildings and affordable homes in Rochester. He spent last summer working for them as an urban fellow.