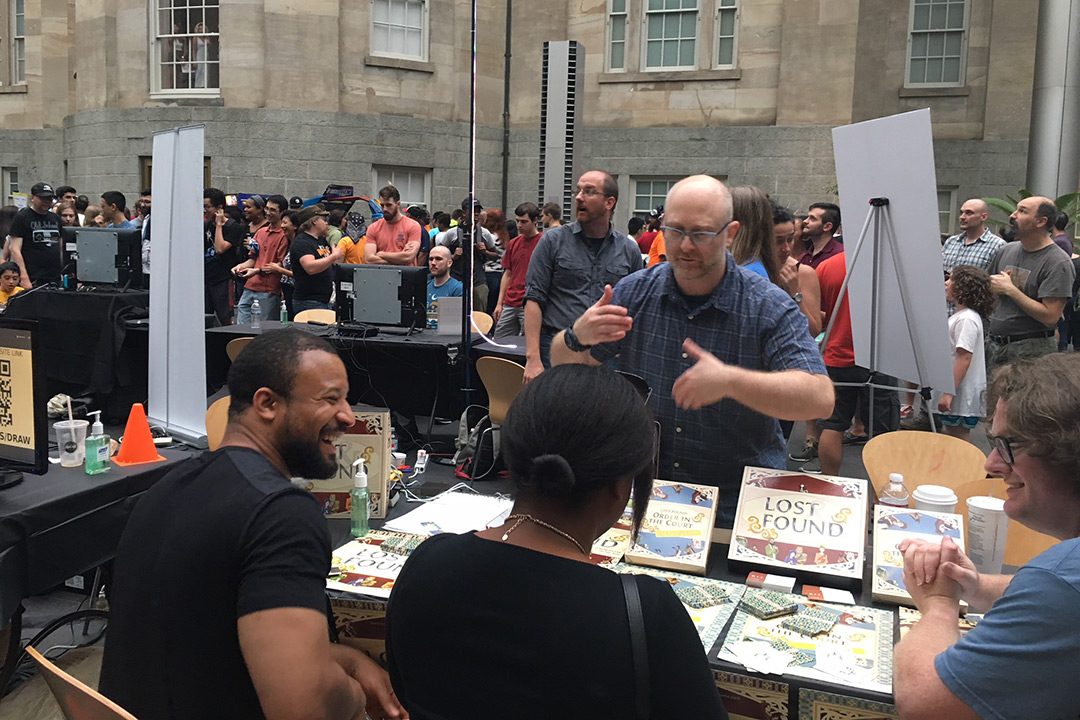 Owen Gottlieb, assistant professor of interactive games and media at RIT, demos the game Lost & Found: Order in the Court - the Party Game at the Smithsonian SAAM Arcade in July. A team at RIT has been on the road to showcase their serious tabletop game Lost & Found, which is receiving accolades for promoting and enhancing the public’s understanding of religion and law.

The interdisciplinary team of Rochester Institute of Technology faculty and student researchers, designers and developers that created the Lost & Found tabletop game is getting recognition for its design.

Throughout the year, the game has been featured at several showcases for independent and serious games, including at the Smithsonian and MIT. Owen Gottlieb, assistant professor of interactive games and media; Ian Schreiber, assistant professor of interactive games and media; and other members of the team are continuing to take the game on a roadshow to demonstrate the first two games in the series.

Accolades that Lost & Found has received, include:

“The Lost & Found series are the rare games that are as good for informing students as they are for taking to a game night with friends,” said Christopher Totten, a game designer, digital artist and author, who saw the game at the SAAM Arcade. “I’ve never had such a blast learning about medieval Cairo!”

In the first game of the series, Lost & Found, players take on the role of villagers who must balance personal needs with the needs of the community, all while navigating medieval religious sacred law systems. The game centers on laws that help solve community problems and were handed down over hundreds and sometimes thousands of years of legal tradition. The initial model of the game teaches Moses Maimonides’ Mishneh Torah, a medieval Jewish law code. The team is currently designing an Islamic law expansion module for the game.

The second game in the series, Lost & Found: Order in the Court, is a party game in which players compete to win the judge’s favor by constructing the best story to explain how a seemingly arcane medieval law might have gotten to court in the first place. While the first game deals with trade off decisions players must make between family and community, the second game centers on legal reasoning.

The game was created by faculty in RIT’s School of Interactive Games and Media and Graphic Design—including Gottlieb, Schreiber and David Simkins, associate professor. Faculty members from Harvard Divinity School, Vanderbilt University, Ithaca College, CoExist and Nazareth College also contributed to the team. Twenty undergraduate and thirteen graduate students at RIT—in the disciplines of research-based game design, illustration, graphic design, project management and knowledge management—have also worked on the games along with faculty since 2014, to bring the games to life.

Both games are available at lostandfoundthegame.com, Shop One2 at RIT’s Global Village and the Strong Museum Gift Shop. The games are distributed through RIT’s MAGIC Spell Studios.

The project was developed through the Initiative in Religion, Culture and Policy @MAGIC, housed within RIT’s Center for Media, Arts, Games, Interaction and Creativity (MAGIC). Gottlieb is the founder and lead research faculty of the initiative, which cultivates new research focused on games, religious literacy, the acquisition of cultural practices and the implications on policy and politics. Also credited in the production of both games are the B. Thomas Golisano College of Computing and Information Sciences and RIT’s Office of the Vice President for Research. The digital prototype version of Lost & Found was supported and funded by the National Endowment for the Humanities. That prototype was featured at the Digital Humanities Arcade of the 50th Anniversary of the NEH at the University of Virginia in 2016.