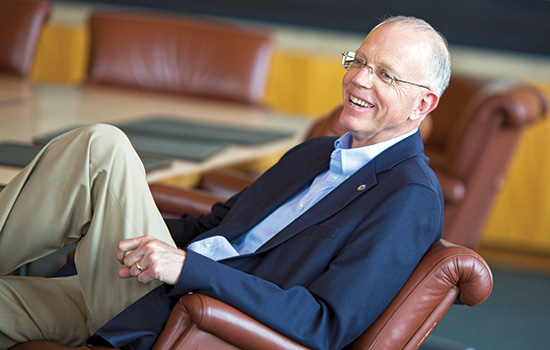 Munson, who will assume RIT’s top post July 1, was introduced by RIT Board Chair Christine Whitman at a community-wide event this morning in the Gordon Field House.

“We believe we have identified the ideal leader to continue RIT’s rise to prominence. A leader who shares our commitment to outstanding career-focused education, research and innovation, love of both technology and the arts, and a desire to help students from widely diverse backgrounds succeed,” Whitman told the audience. “This is a leader who has a vision for the future of RIT that will both unite and excite the entire RIT family from around the world.”

A brief video highlighting Munson’s many personal and professional accomplishments was shown, and then the former dean of the University of Michigan College of Engineering, chosen by the RIT Board of Trustees after a nationwide search, came on stage to thunderous applause and took the podium.

Munson opened his remarks by thanking the RIT Board of Trustees for what he called “a thrill and privilege” to be named university president. And he congratulated retiring President Bill Destler, RIT students, faculty, staff and alumni “for the exemplary work you all have done in creating such a strong foundation for the future.”

“When I stepped down from my dean position this past summer, RIT was already known to me because I had admired your progress over the years and your strength in the arts as well as technology,” Munson said.

“In the coming years, I look forward to maintaining RIT’s traditions and simultaneously building on the 2025 Strategic Plan, ‘Greatness through Difference.’ To be sure, there is still much work to be done at RIT in program development, recruitment of top-notch faculty and students, planning of facilities and fundraising. But I believe that RIT is positioned to continue its upward trajectory, elevating its distinctive programs to best in class and generating new ideas and programs for the future, with the promise of making an ever-larger difference in the word.”

As RIT’s president, Munson will be responsible for one of the nation’s leading research and career-oriented universities featuring 18,700 students from all 50 states and more than 100 foreign countries, 121,000 alumni, $73 million in sponsored research and an endowment of more than $750 million.

He said he was “drawn to RIT when I observed an exciting portfolio of academic programs, research with impact to solve global problems, and an ability to stay focused on the overall student experience.”

A 24-member search committee composed of students, faculty, staff, alumni, administration and trustees narrowed the pool of candidates before the final selection by the Board of Trustees.

“We are proud to welcome Dr. Munson to RIT and look forward to him leading the university through its next exciting chapter,” said Whitman said in a statement. “His extensive academic experience, respected research credentials, demonstrated leadership, engagement with students and global vision will propel RIT to new heights. We know he will build on the strong foundation established by President Destler and his predecessors whose tireless work made RIT a distinctly great university.”

Munson has 38 years of experience in higher education, which includes serving as the Robert J. Vlasic Dean of Engineering at Michigan from 2006 to 2016, where he served two five-year terms, the maximum allowed by U-M. Michigan Engineering is considered one of the top engineering schools in the world. Eight of its academic departments are ranked in the nation’s top 10.

From 1979 to 2003, Munson was with the University of Illinois, where he was the Robert C. MacClinchie Distinguished Professor of Electrical and Computer Engineering, Research Professor in the Coordinated Science Laboratory and a faculty member in the Beckman Institute for Advanced Science and Technology.

Munson’s teaching and research interests are in the area of signal and image processing. His current research is focused on radar imaging and computer tomography. He is co-founder of InstaRecon Inc., a start-up firm to commercialize fast algorithms for image formation in computer tomography. He is affiliated with the Infinity Project, where he is coauthor of a textbook on the digital world, which has been used in hundreds of high schools nationwide to introduce students to engineering.

In 2016, Munson earned the Benjamin Garver Lamme Medal from the American Society of Engineering Education (highest award for an engineering administrator).

Munson’s record of accomplishment that drew praise from current RIT President Bill Destler, who will retire June 30 after serving more than 40 years in higher education and 10 years as RIT president. He applauded the work of the search committee and the selection of the new president.

“On behalf of RIT and the Greater Rochester-Finger Lakes region, I welcome Dr. Munson and his wife, Nancy, to our community,” Destler said. “The naming of a new president is an exciting time for RIT students, faculty and staff, as well as our alumni, family and friends around the world. Dr. Munson has an impressive record of accomplishments and brings skills, expertise and experience that will greatly benefit this university and further propel RIT as one of the great global universities.”

To learn more about Munson’s credentials, including a curriculum vitae, go to the RIT Office of the President website. 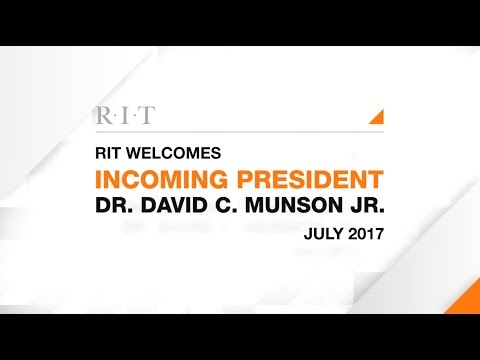