Leadership propelled University of Michigan as a global engineering powerhouse 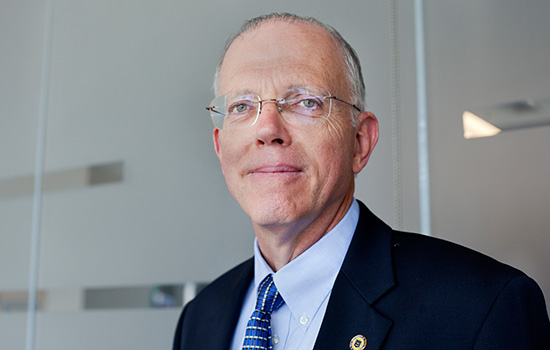 Munson grew up in Iowa, Ohio and Delaware where he sang with a folk group, played saxophone in the marching band, played basketball, earned the distinction of becoming an Eagle Scout with the Boy Scouts, and traveled on family camping trips to visit the national parks. Some of his fondest childhood memories were reading Popular Science magazine, peering at the rings of Saturn, and building rockets made from cardboard tubes and balsa wood that were “launched so high you couldn’t see them, so you’d track them with binoculars and you’d use your walkie-talkies and your recovery team would find the thing out in some farmland.”

He went on to earn electrical engineering degrees from the University of Delaware (BS) and from Princeton University (MS, MA and Ph.D.).

Munson’s career path began at the University of Illinois where in 1979 he started as an assistant professor of electrical and computer engineering. After 24 years, he left Illinois to become chair of the Department of Electrical Engineering and Computer Science at the University of Michigan. In 2006, Munson was named the Robert J. Vlasic Dean of Engineering at Michigan where he served two five-year terms, the maximum allowed. Michigan Engineering is one of the top engineering schools in the world. Eight of its academic departments are ranked in the nation’s top 10 - some twice for different programs.

Munson credits his colleagues at U-M Engineering for the school’s success. Here are highlights of his tenure:

Throughout his career, Munson has advised more than 50 MS and Ph.D. thesis students and served on committees for many others. He has supervised dozens of undergraduate research projects.

In the research world, Munson is highly regarded in several areas of signal and image processing. He has spent much of his research career working on imaging systems, particularly synthetic aperture radar (SAR). He was the first to mathematically describe the tomographic imaging mechanism underlying spotlight-mode SAR, and the first to show why high-quality radar imagery can be produced from band-pass Fourier data. His tomographic formulation of SAR served as the basis for U.S. ground-based imaging of satellites and also underlies progress on space-based high-resolution SAR imaging of the Earth.

Munson also worked with colleagues to devise a new method of Earth-based radar imaging of the moon and interior planets that provides significantly improved resolution, and they showed the feasibility of using existing aircraft weather radars in a synthetic aperture mode for imaging of runways during landing in fog and cloud cover. In related work, he and colleagues demonstrated the feasibility of passive (covert) imaging of aircraft using reflected radio and television signals.

Munson is a Fellow of the Institute of Electrical and Electronics Engineers (IEEE) and he has earned many other awards and honors, including the Benjamin Garver Lamme Medal from the American Society of Engineering Education (highest award for an engineering administrator), in 2016.

Munson, 64, is married to Nancy Munson, a former nurse, avid runner and volunteer. The couple has four sons and four grandchildren.

To learn more about Munson’s credentials, including a curriculum vitae, go to: http://www.rit.edu/presidentialsearch/.

To read more on how Munson propelled Michigan Engineering, go to: http://www.engin.umich.edu/college/about/news/stories/2016/april/set-in-motion.

To see the fun side of Professor Munson, watch “A Jedi’s Chant”: https://www.youtube.com/watch?v=UgNmfada2TQ.