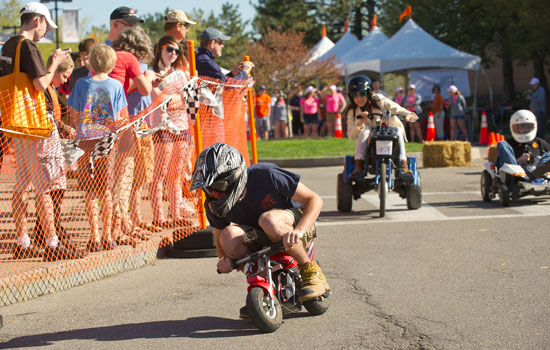 The crowds cheered, the music blared and an eclectic group of child-sized cars raced around Simone Circle Saturday morning as the E-Durance Challenge launched the 2013 Imagine RIT: Innovation and Creativity Festival.

At stake: the chance to win $1,000 or one of President Bill Destler’s prized antique banjos. Perhaps even more importantly, it was a chance for the student teams – from engineering majors to drama performers – to show who had the ingenuity to modify a toy that would outlast its competitors.

It was the perfect kick off to a day designed to showcase the talents and entrepreneurial creativity of Rochester Institute of Technology’s students, faculty and staff. On a sundrenched day, with summery temperatures, more than 30,000 people came to campus to tour the more than 400 interactive exhibits that comprised the sixth annual Imagine RIT.

“RIT is paving the way for a vibrant, innovative community for all of us,” said Monroe County Executive Maggie Brooks, immediately following the race, as she read a proclamation declaring Saturday as Imagine RIT Day at the opening ceremony. Brooks was joined on stage by Terence Rafferty, regional vice president of Time Warner Cable Northeast, the premier sponsor of the festival.

At that ceremony, Destler presented the prizes to the winners of the race: first place and $1,000 to FMS (Facilities Management Services) 61, led by team members Erich Roth, a second-year civil engineering technology major and Devon DiSarro a third-year industrial design major; second place and the banjo to the ASME (American Society of Mechanical Engineers) Dragsters; Most Innovative to team Hot Wheelz and Most Moxie to the RIT Players.

Prizes presented, the crowd then headed off to explore the campus and Imagine RIT.

At the recently dedicated Sustainability Institute Hall, visitors saw the “backyard biodigester.” Tom Trabold, associate professor at the Golisano Institute for Sustainability, interacted with a steady stream of spectators interested in learning about how fuel can be made from kitchen scraps or organic waste, as he displayed a model made from a handful of supplies that you could get at your local hardware store.

Dan Viola, the owner of a home construction company in Penfield, who visited the exhibit with his son, Daniel, said renewable energy is a huge interest in the construction industry. “I have a solar house and more and more of my customers are looking for us to use environmentally friendly construction methods when building their home.”

Peter Mangerian ’93 (electrical engineering technology), of Fairport, walked through Sustainability Institute Hall with his twin 13-year-old sons, Nick and Christian. “They’re interested in anything mechanical so this building was one of our first stops today,” says Mangerian, “I’m going to have a tough time getting them out of here.”

Inside the Gordon Field House, the College of Liberal Arts’ department of modern languages and cultures encouraged Imagine RIT guests to broaden their horizons and learn new languages while visiting the campus.

The Student Environmental Action League’s “Project Runway Goes Green” generated a lot of buzz inside the Student Alumni Union’s Ingle Auditorium as spectators learned how trash could be transformed into fashion. Submissions were graded on creativity, style, materials and difficulty of construction. And a showcase of “upcycled” furniture using old library materials was set up in the Wallace Center’s Idea Factory for visitors to test out and vote on the novel ideas. Visitors saw unique ways in which students have re-purposed library materials and the other sustainable means they have used in construction.

New frontiers in engineering and computing

Linda Brown, physical therapist with CP Rochester, a local non-profit organization that works with developmentally disabled young people, spent the day with an engineering senior design team that built two prototype walkers for her preschoolers in the Augustin Children’s Center, part of CP Rochester. The team, made up of fifth-year students in the Kate Gleason College of Engineering’s mechanical, computer and industrial and systems engineering programs, has projects focused on developing assistive devices.

“This is a link to independence,” Brown said of the prototype. “These are for kids who want to go places.”

RIT students designed and built upright, motorized equipment to provide the children with full support for standing and moving. The tray table designs across the front of the walkers are both fun and functional, sporting a LEGO-inspired look for the movable displays and consoles that power the walkers. Brown says the devices offer children the choice of where and how they will move and play.

In front of the Tiger Statue, the RIT Cycling Club set up its Bike Blender. The exhibit offered people a chance to pump the pedals on a bicycle, which powered the gears on a blender filled with a smoothie drink concoction. After every two riders, the club emptied the pitcher and served smoothie samples to the waiting crowd.

“I just powered a blender with a bike, no electricity. That is so awesome,” said Charity Hinman, 14 of Brockport, after she took her turn. Charity said she, her parents and three younger siblings came to Imagine RIT because they are interested in science. “It’s amazing, all the different exhibits are cool and inspiring. I think it’s an awesome school and I would love to come here.”

Festivalgoers who made their way to the Computer Zone at Imagine RIT found new ways to connect with computing using hands-free technology. Several popular exhibits in RIT’s B. Thomas Golisano College of Computing and Information Sciences utilized technologies like the open source code of Microsoft Kinect to allow visitors to control computer applications in new and different ways. From a motion-controlled game of Pong to a coffee table that is actually a 2 by 2.5-foot touchscreen monitor, students and faculty in RIT’s computing college showed that they know how to think outside the box.

Having fun with science

At the Science Center Zone, RIT graduate student Valerie Rapson handed out solar viewers — sunglasses that block out 99 percent of light — to passersby of the exhibit, “Galaxies: Islands in the Universe,” that she organized with others in RIT’s astrophysical sciences and technology program.

“You can safely look at the sun with these special glasses,” she told visitors.

One after another tried on the paper glasses with the same refrain: “Cool!”

Others looked at sunspots through a tabletop telescope outfitted with a solar filter.

“The sun is out in Rochester!” said Billy Vazquez, RIT graduate student in the astrophysical sciences and technology program. “It’s a rare opportunity.”

Lions and Tigers and Water Bears, Oh My!” in the College of Science drew a steady line of visitors.

Moss piglets. Water bears. Call them what you will, but these plodding microbial critters known as tardigrades are tough. And that’s why Paul Shipman, associate professor in RIT’s Thomas H. Gosnell School of Life Sciences at RIT, is fascinated by them.

“They live in moss and lichens,” said Shipman, a herpetologist who organized the exhibit. “They live in scour holes in glaciers and in holes in sides of buildings. They can live 120 years.”

Sarah Coleman, from Henrietta, waited in line to see the water bears with her 8-year-old son, Ethan, a student at Henrietta’s Sherman Elementary School. “I bring my boys every year,” she said. “It’s good for kids to see stuff like this — better than videogames.”

Traveling the world through arts, crafts and language

The College of Imaging Arts and Sciences featured a little bit of everything in its exhibits.

At the School of Film and Animation studio inside Gannett Hall, guests were transported to the visual magic of Hollywood. Walking onto the giant “green screen,” they were suddenly superimposed into many exciting locations, including floating in outer space, flying in the air, or swimming in a stream.

“We come here every year,” said Serina Tetenov ‘00 (psychology), as she collected her sons Camden, 8, and Hayden, 4 after they swam in a make-believe river. “The green screen is always a lot of fun, and it’s an opportunity for them to burn off energy after a long winter.”

Students in the School for American Crafts demonstrated their skills in a variety of media – glassblowing in the studio’s “Hot Shop” and vessels on the potter’s wheel in the ceramic studio. Spectators talked to artists as they worked, finding out what it takes to master these materials.

World Travelers: Learn a New Language Today, featured students and faculty offering “crash courses” in 10 languages — including American Sign Language — taught at RIT. Following a five-minute tutoring session, guests demonstrated their new-found linguistic skills by speaking a few sentences on camera, with images of the country of origin transposed on a green screen behind them. Videos of the participants will be used on the department’s website and YouTube channel.

Thirteen-year-old Kyle Rosenthal, a student at McQuaid Jesuit School in Rochester, N.Y., worked with a Japanese instructor at the exhibit and believes he can now travel to Japan with ease after his session with the World Travelers group.

“I study Italian in school now, and I thought it would be fun and interesting to try to learn Japanese,” he said. “I think I would be able to understand some of it if I went to Japan.”

Imagine RIT and the community

Guests said the festival offers a sense of community. More than 500 alumni dropped by the Alumni Oasis at the Vignelli Center for Design Studies, where they could pick up a free hat, grab a cup of coffee and get their photo taken with Ritchie.

Sue Wyatt ’84 (physics) and her husband Jeremy Wyatt ’86 (physics) were there with their 13-year-old son, Wesley. Sue and Jeremy met on campus in 1979 when they lived in the residence halls.

Wesley says he already knows he wants to attend RIT like his parents.

“The festival is a yearly highlight,” says Sue, adding that the family hasn’t missed one yet.

They met at the first one five years ago when they were both juniors. Lipari was late for her shift as a people-mover volunteer and missed the ride-along to learn the route. So she jumped on Haber’s golf cart. He invited her to his Eight Beat Measure concert that night.

Their wedding is Dec. 7.

“It is definitely nostalgic,” Lipari says. “This one is very special.”

They also had one other goal to accomplish this year, Haber says. “We want to get a good picture on a golf cart together.”

Perhaps they can do it again at the next Imagine RIT: Innovation and Creativity Festival, set for May 3, 2014. 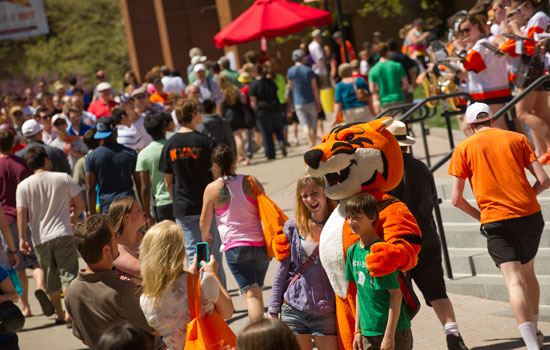