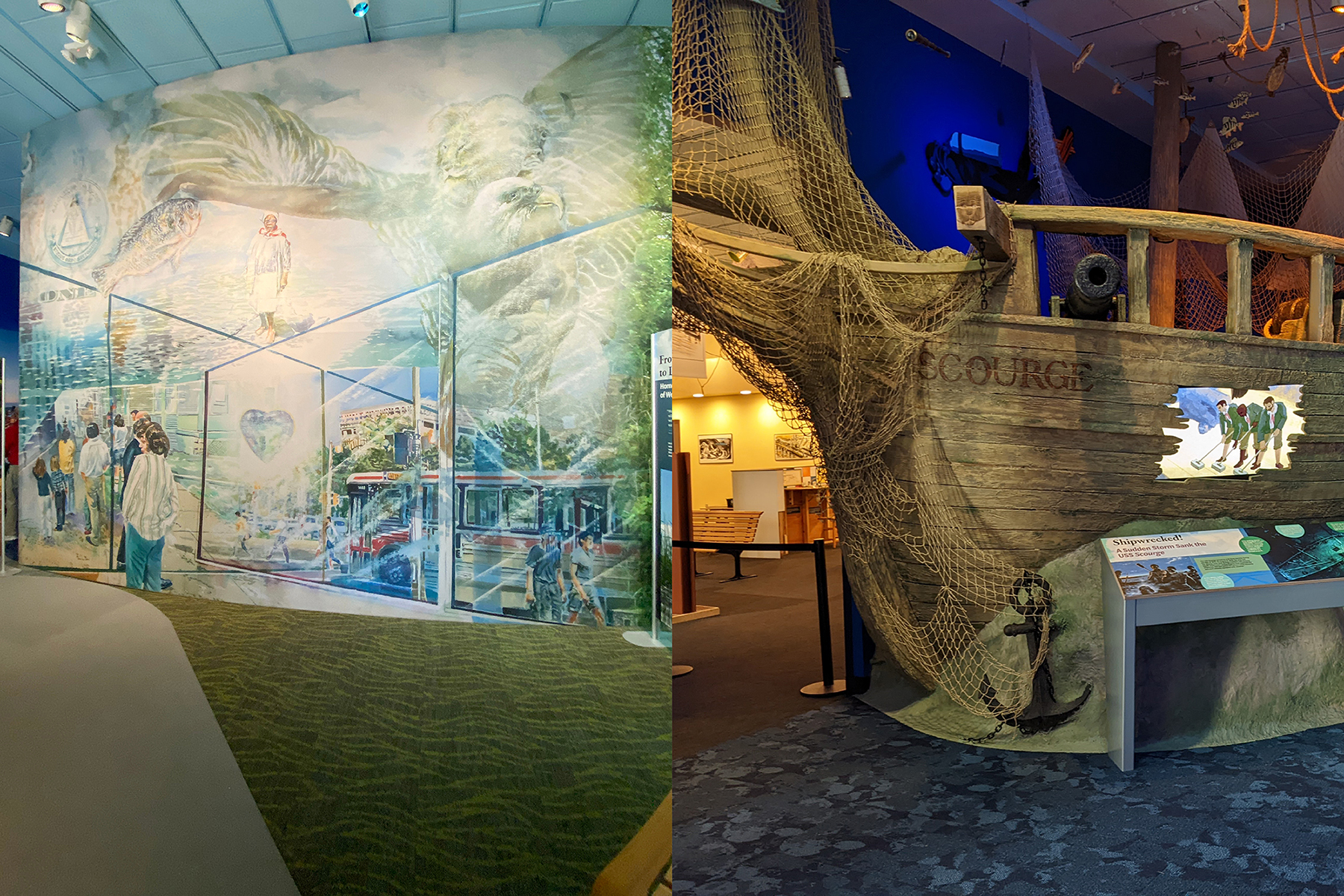 The RIT College of Art and Design connections to the Rochester Museum and Science Center's newest exhibit can be seen in a reproduction of a painting by Professor Luvon Sheppard (left) and a warship replica that Jacob Dambra '22 helped construct (right).

A longtime professor and a recent alumnus from RIT’s School of Art were instrumental in the creation of prominent elements of the Rochester Museum and Science Center’s (RMSC) popular new exhibit, “Wonders of Water.”

A sprawling reproduction of Professor Luvon Sheppard’s 1993 watercolor painting, “Charity,” is the backdrop for a section of the permanent exhibit that opened in November. The piece was digitized and printed as a 20-by-7.5-foot graphic on a fabric wall. It is an appropriate accent for the exhibit highlighting connections between water and life in Rochester, N.Y.

Meanwhile, Jacob Dambra ’22 (studio arts BFA - ceramics option) helped construct another centerpiece of the RMSC attraction — a two-thirds scale model of the USS Scourge warship that sank in Lake Ontario during the War of 1812. Dambra worked for nearly six months on the project. 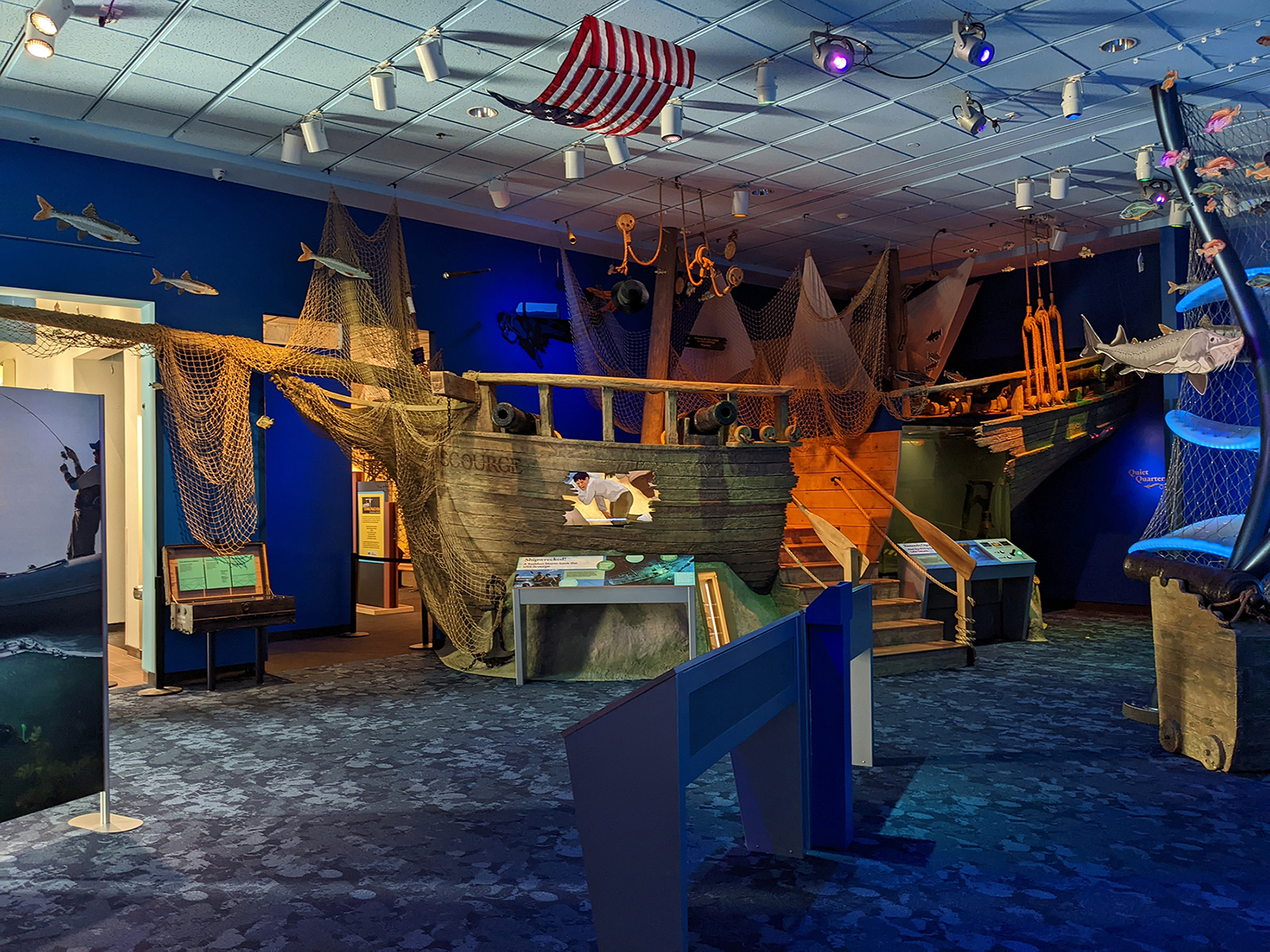 The USS Scourge replica invites children and families to come aboard and learn about the warship's history.

He was part of the team that assembled the fabricated wooden underbelly and flexible plywood boards that comprise the exterior. Dambra was then responsible for applying the ship’s epoxy, paint and varnish. In between those tasks, he deployed his ceramic sculpting and craft skills, using rubber molds and clay tools to give the ship its distinctive texture.

“The painting process was multiple coats consisting of dark, mid and light tones,” he said. “After the layers were added I went back through with a few colors and a rag to blend and age the look of the ship.”

The work resulted in a replica of the USS Scourge that assists museum visitors in learning about its history and ties to the area. 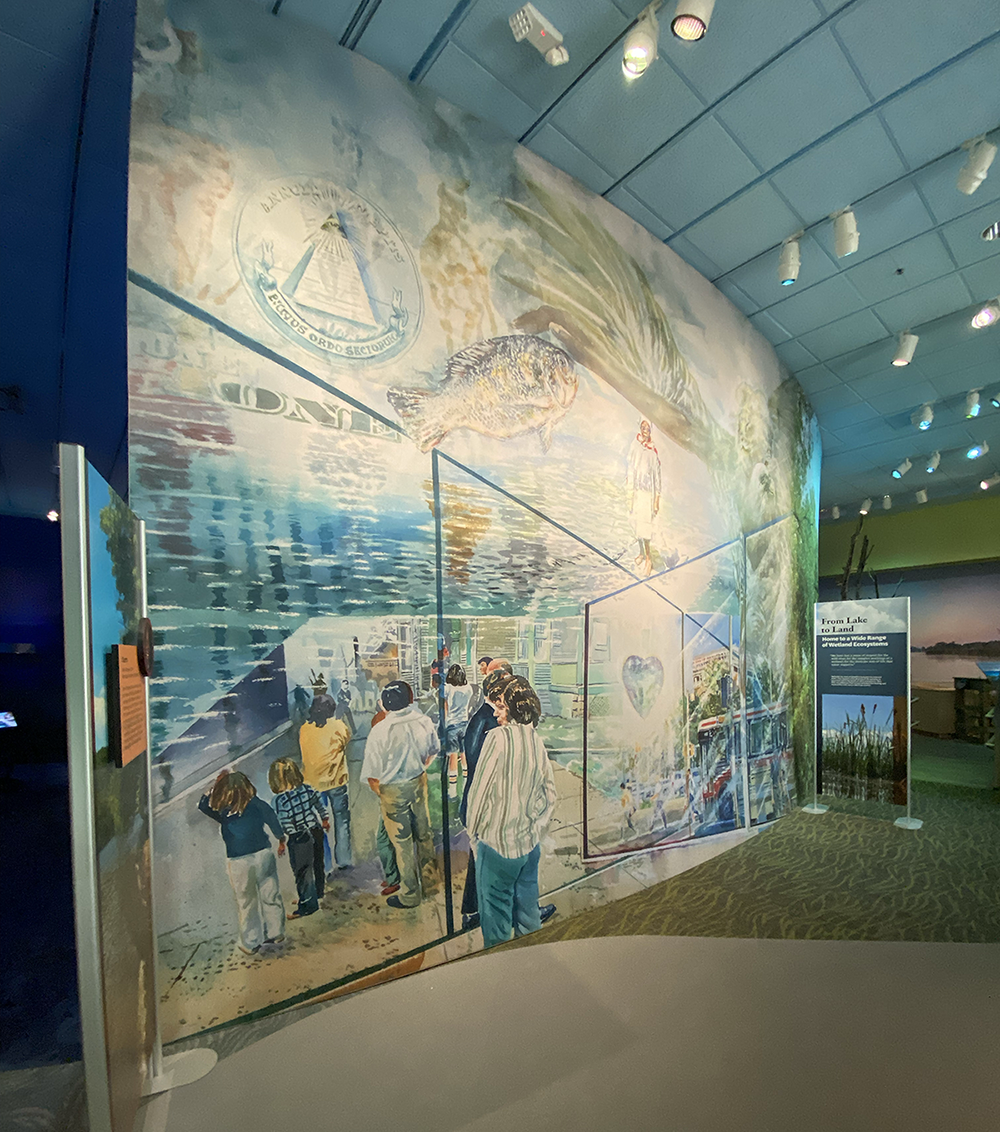 Sheppard's "Charity" painting within the "Wonders of Water" exhibit.

“Wonders of Water” is a multimedia, hands-on exploration of the importance of water in developing communities, ecosystems and economies.

“There really isn't any feeling like the first time, after months of work, I got to see families together in the exhibit enjoying what we had done,” Dambra said. “The knowledge that the exhibit will be available here in Rochester for years to come keeps me excited about what I'll do next.”

Sheppard, throughout his 50 years teaching at RIT and even before that, has built his career on community collaboration. This connection with RMSC is among the countless instances that illustrate Sheppard’s enduring legacy of championing art, and the role it plays in connecting people and breaking down racial, class and generational barriers.

“As an artist, I use water both physically and symbolically,” Sheppard said. “‘Charity’ increased my sensibility between science and aesthetics of the urban landscape. With water, I have combined naturalism, current events, life experiences, personal relationships and biblical associations in my work. This scientific collaboration has provided another perspective for myself and the general public to view art.”