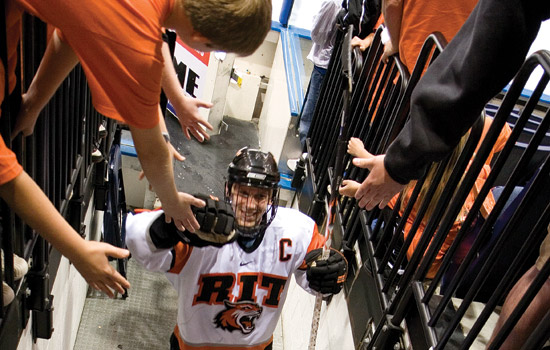 Rochester’s Blue Cross Arena will be the venue for RIT alumni, family and friends to cheer for their alma mater as RIT men’s hockey highlights an action-packed weekend of events for Brick City Homecoming 2009. The event marks the first time in homecoming history that an RIT hockey game will be played during the celebratory weekend. The Tigers host Colgate University at 7:05 p.m. Saturday, Oct. 10. RIT, now in its fifth season as a Division I hockey program, has helped raise the level of school spirit on campus. The Tigers regularly sell out the 2,100-seat Ritter Arena and have drawn thousands of local fans to the Blue Cross Arena, averaging close to 3,500 spectators at the downtown venue. “Hockey is so much a part of the RIT student experience, possibly even more so now that we are a Division I program,” states Cindee Gray, assistant vice president for government and community relations and special events. “Brick City Homecoming is an excellent opportunity to rally alumni, students and families, along with faculty and staff, around a common interest and truly share the RIT spirit and pride.” RIT hockey has hosted regular season games at the arena each of the past two seasons. In 2007, the Tigers hosted Cornell University, defeating the Big Red in front of 5,142 fans, the largest crowd to see RIT in Rochester. Last season, RIT hosted St. Lawrence University, playing in front of 3,296 fans. In addition, Blue Cross Arena was the site of the 2007, 2008 and 2009 Atlantic Hockey Championships and will host it again in 2010. Last season, the Tigers advanced to the Atlantic Hockey semifinals for the second consecutive year. RIT set a Division I program record with 23 wins last season and shared the 2009 Atlantic Hockey regular season championship with Air Force. “We are certainly excited to be playing on Brick City Homecoming weekend,” says RIT head coach Wayne Wilson, who may become the program’s all-time leader in coaching victories on Oct. 10. (Wilson currently ties the record with 188 wins.) “This game will get more attention from the RIT community, from students, parents of students, alumni, faculty and staff. It is our ‘homecoming’ weekend and we hope to have a packed house at Blue Cross Arena.” The Tigers have won 63 games over the last three seasons and are primed for another strong year in 2009-2010. Four of RIT’s top six scorers return from last season’s club, which finished second overall in the nation. Tickets for the 2009-2010 season are on sale at the Gordon Field House and Activities Center box office by calling(585) 475-4121, or online at ticketmaster.com. For information on ticket packages for the season, visit www.ritathletics.com.