Honor given for academic excellence, semiconductor research and student mentoring 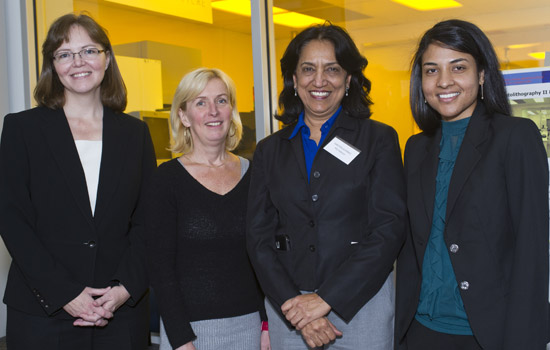 Santosh Kurinec (second from right) was recently recognized as an IEEE Fellow by the organization’s board of trustees for her work as an educator, researcher, and mentor. She has worked with Kris Campbell (far left), professor at Boise State University; Simone Raoux, a researcher at IBM; and Archana Devasia (far right), a microsystems engineering doctoral student, working on next-generation semiconductor technologies.

The semiconductor industry has grown significantly in the past 25 years, advanced by some of its earliest leaders. One of those early leaders, Santosh Kurinec, a professor at Rochester Institute of Technology, has been named an IEEE Fellow by the Institute of Electrical and Electronics Engineers Board of Directors.

The designation is one of the highest grades of membership in the international organization. Kurinec is being recognized for her work integrating innovative microelectronics research into engineering education.

“This is a great honor,” says Kurinec, a professor in the electrical and microelectronic engineering department in RIT’s Kate Gleason College of Engineering. “It is an endorsement to our dedication in educating the next generation of engineers for one of the most astounding technologies of our times— semiconductors and microelectronics.”

As a member of the RIT faculty for 22 years, the Pittsford, N.Y., resident has taught engineering courses and acted as academic advisor and mentor to undergraduate, graduate and doctoral students in the college. From 2001 to 2009, Kurinec was department head of microelectronic engineering. Since 2008, she has served as a visiting scholar at the IBM Watson Research center in Yorktown Heights, N.Y.

Kurinec is one of the leading researchers in the area of photovoltaics, non-volatile memory, advanced integrated circuit materials and processes, and her extensive work in these areas has resulted in the development of novel materials and devices in the Integrated Circuit Fabrication facility at RIT.

Kurinec also has worked at the National Physical Laboratory, India, and the University of Florida and taught at Florida State University. She has engaged in numerous research collaborations nationally and internationally at other universities and within the industry.

At RIT, Kurinec has been actively engaged in K-12 outreach for promoting engineering education. Outside of RIT, Kurinec is a member of the American Physical Society; New York State Academy of Sciences; IEEE-USA R&D Policy Committee and associate editor of IEEE Transactions on Education, the institute’s professional publication; and is an IEEE Electron Devices Society Distinguished Lecturer.

“It is great to learn that Dr. Santosh Kurinec has been named a Fellow of the IEEE. This honor is in recognition of years of contributions to engineering education in microelectronics by integrating research with teaching in the classroom and laboratory. It is well deserved,” says Lynn Fuller, professor of electrical and microelectronic engineering and an IEEE Fellow.

NOTE: The IEEE is the world’s leading professional association for advancing technology for humanity. Through its 385,000 members in 160 countries, the association is a leading authority in a wide variety of areas, including aerospace systems, computers and telecommunications, biomedical engineering, electric power, and consumer electronics.