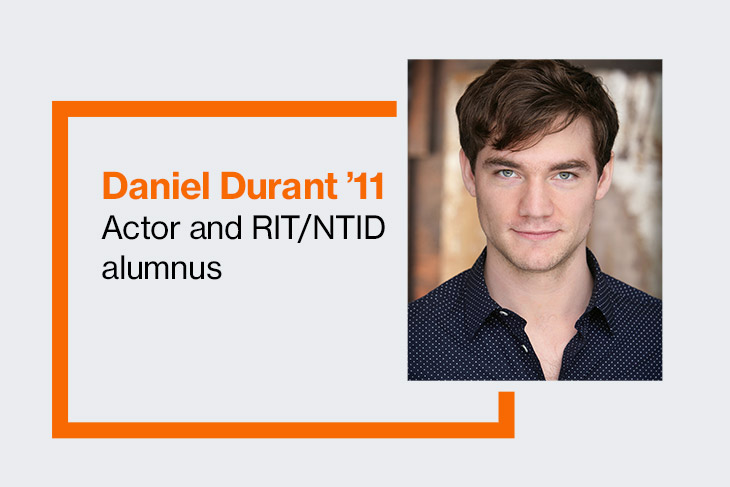 RIT/NTID alumnus Daniel Durant ’11 (applied computer technology) is undoubtedly celebrating the latest accolades for the 2021 film CODA. Durant plays a major supporting role in the newly Oscar-nominated comedy-drama, a coming-of-age film, written and directed by Sian Heder, about the only hearing member of a deaf family.

Durant, from Duluth, Minn., has had several starring roles in theater and television. He made his Broadway debut in Spring Awakening in 2015 and took on the co-lead role of Moritz in the production, receiving rave reviews from The New York Times, National Public Radio, BBC, and others. He had a recurring role in ABC Family’s Switched at Birth, playing the character of Matthew, and co-starred in its 2013 Peabody-winning episode titled “Uprising.” In 2017, Durant joined forces with Teater Manu performing arts theatre for shows in Norway and France as the lead role of Jonas in Jonas and the Body.

He has received numerous awards and recognitions, including the 2016 Theatre Award for Outstanding 2016 Broadway Debut Performance; Broadway.com’s “Top 10 Show-Stopping Performances of the 2015-2016 Broadway Season”; Huffington Post’s “Top 10 Best Theatrical Performances of 2015”; Theatremania.com’s “12 Best Broadway Debuts of 2015”; and a 2014 Robby Award nomination for Excellence in Theatre. Durant was also the 2014 Deaf Awareness Month Honoree for the City of Los Angeles, honoring his outstanding contributions to the arts and deaf and hard-of-hearing communities in Los Angeles.

CODA was nominated this week for the 2022 Academy Awards for Best Picture and Best Adapted Screenplay, as well as Best Supporting Actor for Troy Kotsur, who made history as the first deaf male to be nominated in that category. Kotsur was also a member of RIT/NTID’s traveling performance troupe Sunshine, Too! from 1990 to 1991.