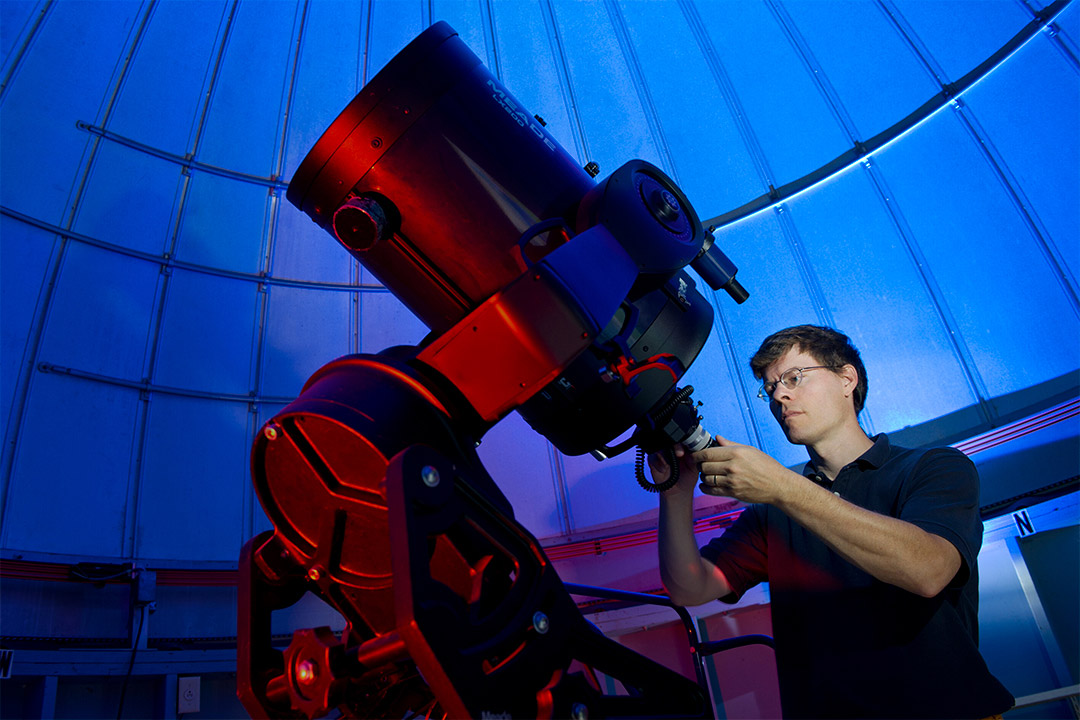 In addition to teaching courses in physics and astronomy, Professor Michael Richmond runs the RIT Observatory. Richmond is among the recipients of this year’s Eisenhart Awards for Outstanding Teaching.

Michael Richmond considers himself a “lucky guy.” As a professor in RIT’s School of Physics and Astronomy, he gets to spend his workdays talking about the subjects that have fascinated him since he was young. His passion for teaching physics and astronomy shines through so brightly that this year it earned him an Eisenhart Award for Outstanding Teaching,

Richmond came to RIT in 1997 after earning his bachelor’s degree in astrophysical sciences at Princeton and Ph.D. in astronomy at the University of California at Berkeley. He teaches a wide mix of classes ranging from first-year physics courses like University Physics I and II to graduate astronomy courses. Richmond said he hopes that in addition to teaching the key concepts outlined in the curriculum of each of his classes, he can convey two important messages to each of his students.

“One is that it’s OK to make mistakes,” said Richmond. “You can still succeed in life even if you make mistakes. The other thing I hope they see is that I think the subjects that we’re discussing in class are cool and interesting and I really like them. Maybe I can show them that even if someone has been doing something for a long time, he can still find it fun.”

Outside the classroom, Richmond runs the RIT Observatory, which he has been involved with since it moved to its current location in 1999. Much of his research focuses on using the observatory telescopes to study close binary systems, taking measurements when one star pours material onto its companion, causing its companion to flare up and get very bright. He also works with Japanese astronomers who built a special wide field astronomical camera they mounted on a telescope in the mountains of central Japan to look for objects that blow up in the sky. He has traveled to Japan at least 10 times over the past 20 years to collaborate with the group.

Richmond noted that passion alone does not make a good teacher. He is grateful for the many faculty and staff who have supported him and helped him hone his craft over the years.

“I’ve had a very good set of colleagues and people to work with at RIT who’ve taught me a lot about teaching and working with students,” said Richmond. “They’ve been very generous with their time and effort when I’ve been sick or couldn’t make a class, helping my students and volunteering to do things.”

He said the guidance from his colleagues has helped him evolve his teaching style over the years, making his classes more interactive and less lecture-heavy. But although teaching styles shift with time, his love for his profession has only grown.

“Sometimes I wonder what I would do if I wasn’t a faculty member at RIT,” said Richmond. “I doubt I would find many things that would bring me as much joy as spending all my time talking about astronomy.”

To learn more about the Eisenhart Awards for Outstanding Teaching and see previous recipients, go to the Academic Affairs website.