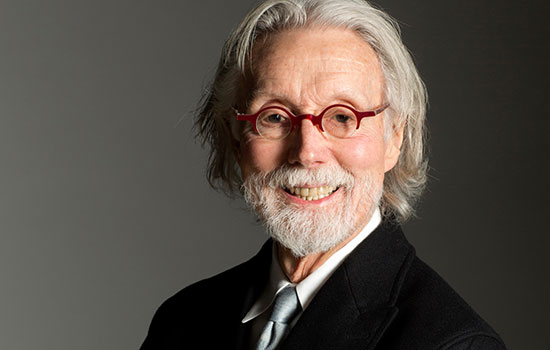 Wendell Castle, treasured Artist in Residence at Rochester Institute of Technology and widely recognized as the “father of the art furniture movement,” died in his Scottsville, N.Y., home on Jan. 20. He was 85 years old.

The much-celebrated American designer and craftsman invented a completely new way of designing and constructing furniture, allowing unrestricted forms to be realized that would be impossible to create using traditional techniques. His award-winning pieces crossed over into the realm of sculpture that today belongs to the permanent collections of more than 50 world-class museums and galleries across the globe.

“Wendell Castle is known the world over for his contributions to the field of art and design,” said Josh Owen, professor and chair of RIT’s industrial design program in RIT’s School of Design.

Owen recalled a story when he and his wife visited Paris several years ago and knocked on the door of a gallery that represented Mr. Castle. “When we explained that we were friends of Wendell’s, their eyes widened and they urged us to ask Wendell to ‘make more things, more quickly for us. We cannot keep up with the demand!’”

Up until recently, Owen noted, Mr. Castle had regularly taught a graduate industrial design seminar, which enabled RIT students to interact with the renowned artist in an intimate setting. He also regularly opened up his Scottsville studio to give RIT students in the College of Imaging Arts and Sciences a peek behind the scenes into the inner workings of his unique practice.

“Wendell gifted us with his enthusiasm, his eagerness to collaborate and share, and his generosity to deliver his intentions with tangible and always elegant results,” Owen said. “We will never forget the joie de vivre (French for “the joy of living”) that Wendell shared with us.”

A native of Emporia, Kan., Mr. Castle—renowned for carefully taking everything in from behind his iconic small, round, colorfully framed spectacles—initially conceived and identified his design’s shapes and forms through a discipline of drawing several hours each day. His drawings began as free sketches that captured a concept and formed the initial step in designing sculptural furniture. He chose certain drawings for further exploration and worked them into a design series.

Using translucent paper through which the former drawing was viewed, he reworked the form until he was satisfied that it would serve as a roadmap for the journey from paper to dimensional form.

Mr. Castle’s connections with Rochester, N.Y., and RIT ran deeply. Harold Brennan, the director of what was then the School for American Craftsmen (SAC), recruited him in 1962 to join the RIT faculty to teach woodworking and furniture design. SAC served as the fertile ground where Mr. Castle’s creative roots took hold. He maintained his own studio on Troup Street in downtown Rochester, within walking distance of RIT’s former city campus during the 1960s.

When asked years later about his relationship with RIT and its connection to his work, Mr. Castle said, “The time I spent at the downtown campus was wonderful and amazing. I believe that I learned as much, or more, those first few years, as the students did. The faculty whom I met during that time and became friendly with, I still count as some of my dearest friends today. I’m also still close with some of my students from those first years with RIT.”

By 1965, Mr. Castle’s work and influence positioned him at the forefront of the growing Craft Furniture Movement sweeping the nation. He was a standout among a group of artists who became known for making furniture by a skilled hand, highlighting individual design and beauty to propel it into a new category: art.

Critic Joseph Giovannini once noted that when Mr. Castle’s furniture appeared in galleries, it was seen as “radical in fundamental ways: the visual presence of a piece now outweighed its function, design outweighed technique, and form was more important than material.”

Mr. Castle’s designs were organic, bold and at times whimsical. Crafted from hardwoods, plastics, concrete and metals, he utilized multiple disciplines that included stack lamination, hand carving techniques, casting forms in bronze, and even programming a six-axis computer numerical call (CNC) milling robot to carve his designs. In the 1970s, he moved to Scottsville, where he continued to maintain an active design and production studio.

He garnered myriad honors throughout his illustrious career, including the Leadership Medal in 2015 from the Smithsonian’s Renwick Gallery in Washington, D.C.; the Smithsonian’s Visionary Award (along with fellow RIT Artist in Residence, Albert Paley) in 2014; and the Eastman Medal from the University of Rochester in 2013. The inaugural Visionary Award was established to honor those artists who “have risen to the pinnacle of sculptural arts and design.”

Mr. Castle was among 10 members of the RIT family who were immortalized as members of the first class of inductees into the RIT Innovation Hall of Fame in April 2010.

His work has been exhibited around the globe, including London, Paris, Seoul and New York City. In addition to national and international private and public collections, Mr. Castle’s work can be found in the permanent collections of more than 50 museums and cultural institutions worldwide, including the Art Institute of Chicago, the Metropolitan Museum of Art and the Museum of Modern Art in New York City.

In 2016, RIT’s University Gallery marked the first-ever exhibition to focus on Mr. Castle’s creative process, providing evidence of how he conceived and created. “Wendell Castle Imagined: A Revelation of Creative Process” featured an artist talk and reception with an audience that stretched the gallery’s capacity, according to Wendy Marks, the gallery’s director.

In his artistic statement for the RIT exhibit, Marks said Mr. Castle wrote: “Art, like life itself, is a voyage of discovery. I had to lay one brick on another, set thousands of ideas on paper, before getting an authentic one dragged up from my guts. I haven’t the slightest idea what my future work will look like.”

“My drawings and models are the slenderest of help,” he continued. “I may scrap them all. I invent, distort, deform, exaggerate, compound and confuse as I see it. I obey only my own instincts, which often I do not understand, myself. I often draw things I do not understand, but am secure in the knowledge that they may at some point become clear and meaningful. I have faith in myself. I have had to learn to think, feel, and see in my own way, which can be the hardest thing in the world. Whatever progress there is in art, comes not from adaptation, but through daring.”

Proving his talents had no bounds, Mr. Castle also published My 10 Adopted Rules of Thumb in 1996. Initially written as a guide to creativity, it quickly became popular among problem-solvers in a wide range of fields. His list still resonates and inspires today, from creative art and design professionals, to educators, counselors and scientists.

Among his rules of thumb: “If it’s offbeat or surprising, it’s probably useful” and “If you do not expect the unexpected, you will not find it.” And, lastly, “Don’t get too serious.”