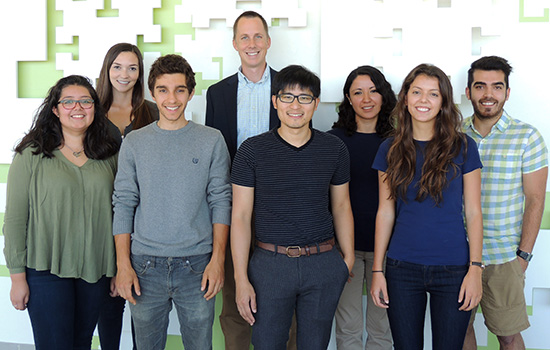 Researchers at Rochester Institute of Technology are advancing tissue engineering through new work in developing improved porous membranes that will be the “scaffolds,” or foundational structures, for in vitro tissue models.

“We are building membranes that will not only solve the needs of researchers studying the basic biology of barriers, but also scientists and engineers investigating drug discovery and stem cell differentiation,” said Thomas Gaborski, assistant professor of biomedical engineering in RIT’s Kate Gleason College of Engineering. “Half of this work is about the development of membrane technology, and the other half is about developing better in vitro barrier model systems.”

Gaborski was awarded a five-year, $1.8 million grant from the National Institutes of Health to develop “Transparent ultrathin nano-membranes for barrier cell models and novel co-cultures systems.” This is a new investigator award given to early-career faculty-researchers who propose innovative approaches to high-impact projects. His work is in developing nano-membranes, including new, ultrathin, transparent glass membranes, and performing collaborative work with other researchers in the fields of physiological barrier models and stem cell differentiation.

One of the technologies he and his team are working on are “glass” membranes that are optically transparent allowing researchers the ability to visualize cellular processes in real-time and in high resolution. Conventional membranes currently used in research labs to build engineered tissues are often thick and usually opaque, making it difficult to see details at the cellular level. Gaborski’s new design will be an advance in the technique.

“Current membranes are limiting because they don’t allow easy physical and biochemical communication between cells that are on opposite sides of the membranes,” he explained. “Most barriers in your body are not made up of a single layer of cells but multiple layers, and this membrane must support the cells, while also preventing them from mixing with one another.

“We want to create stratified layers of tissue in the laboratory, but current membranes are thick and not as porous, so that limits cell-to-cell communication. We want something that provides a scaffold for growth, but does not hinder natural processes.”

In addition to developing new membranes, Gaborski’s research team will continue to focus on cell-substrate interactions and vascular barrier models. In 2014, he was presented the Young Innovator Award in Cellular and Molecular Bioengineering given by the Biomedical Engineering Society (BMES) for his work in developing porous membranes and co-culture systems using vascular endothelial and adipose-derived stem cells. His team is developing ways to use ultra-thin nano-membranes to differentiate stem cells into the cells necessary to create vascular networks. These cells could ultimately be used to create blood vessels within engineered tissues and organs.

Gaborski and his team are also using transparent membranes to investigate fundamental cellular interactions. His team recently returned from the annual BMES conference where they presented results showing that membrane properties could be optimized to reduce cell-substrate interactions and instead promote cell-to-cell interactions. In the future, membrane pore properties could be engineered to create more physiologically relevant culture substrates to enhance barrier formation in these micro-physiological systems. More realistic in vitro barrier models would benefit drug delivery research as well as a better understanding of tissue formation, he explained. 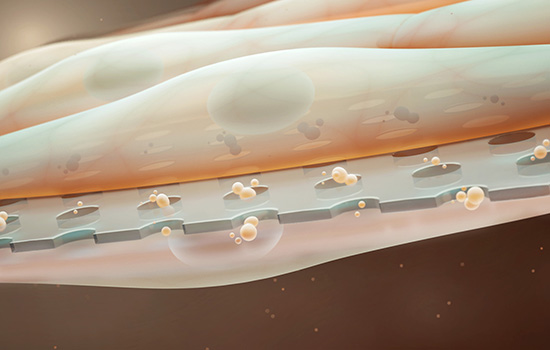 A closer look at the nano-membrane being developed for in vitro tissue engineering. Graphic by Noah Greene and Joe Olmsted