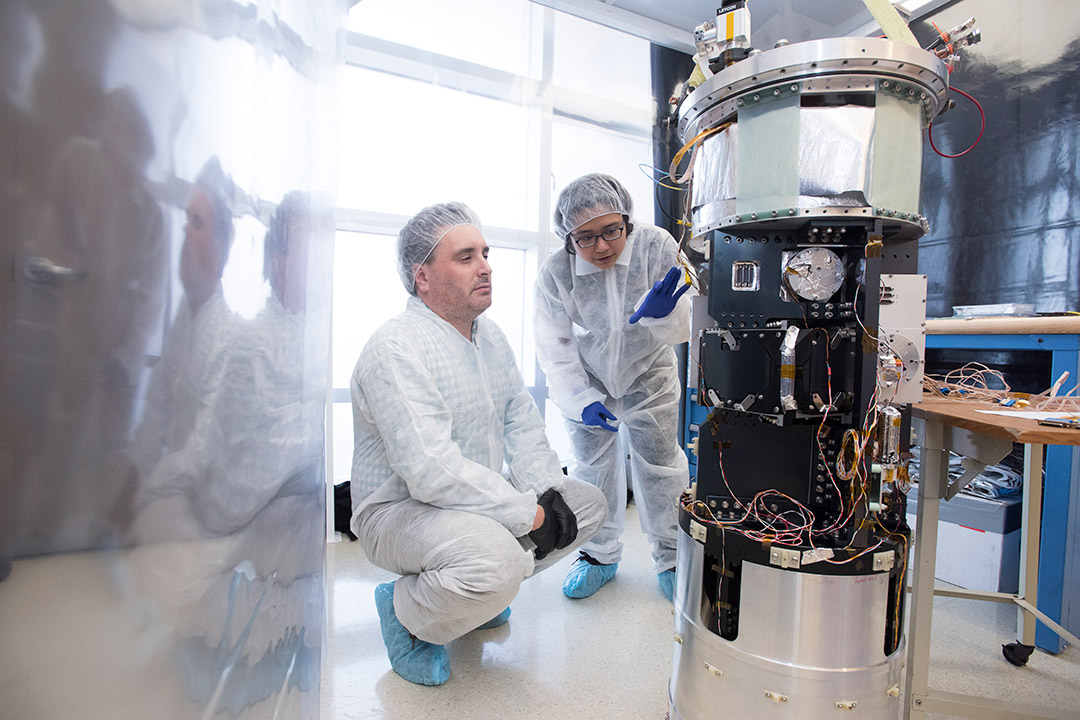 A team of RIT researchers is helping launch an experiment above the atmosphere to better understand extragalactic background light, which traces the history of galaxies back to the formation of the first stars in the universe.

“We’re trying to understand the fluctuations in the background light at infrared wavelengths,” said Michael Zemcov, assistant professor of physics and a member of RIT’s Future Photon Initiative and Center for Detectors. “We want to know if there is matter or sources of light in between galaxies that we can’t find in the ways we’ve been using up to now.”

The experiment leverages an observational technique called intensity mapping used to study the structure of the universe.

Chi Nguyen, an astrophysical sciences and technology Ph.D. student from Vietnam, is one of the researchers critical to the project. She received a NASA Earth and Space Science Fellowship in astrophysics research that funds her contribution to the project’s data analysis and instrumentation.

The experiment section of the rocket—the compartment that holds the telescope and detectors—arrived at the RIT campus in August so that Zemcov and Nguyen could assemble and calibrate the equipment, along with support from collaborators from Japan, California Institute of Technology, and University of California, Irvine.

At the end of November, it ships to the Wallops Flight Facility in Virginia to be integrated with the rocket.

It then heads to the New Mexico desert in January where the rocket will ultimately launch.

CIBER-2 will fly on a Black Brant IX sounding rocket from the White Sands Missile Range in February. The short flight will last for about 15 minutes and CIBER-2 will collect data for about half that time before the rocket returns to Earth.

Once the launch is complete, researchers will begin analyzing the data and preparing for subsequent launches over the next five years that will collect additional data at different wavelengths.

Zemcov said that if the experiment uncovers new sources of light in between galaxies that couldn’t be found through other means, it would raise additional important questions.

“If we find such light, how bright is it, where is it coming from, and what’s responsible? It could be things as simple as stars outside of galaxies or it could be even more exotic things like dark matter that’s decaying into photons.”