Paper to publish in ‘Monthly Notices for the Royal Astronomical Society’ 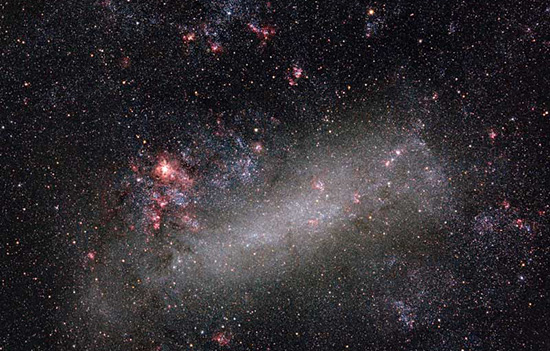 The Large Magelanic Cloud is a well-known satellite or dwarf galaxy that closely orbits the Milky Way and is visible in Earth’s southern hemisphere. RIT researchers make the case for the existence of “missing” satellite galaxies that are cloaked in dark matter and cannot be directly observed.

Research conducted by scientists at Rochester Institute of Technology rules out a challenge to the accepted standard model of the universe and theory of how galaxies form by shedding new light on a problematic structure.

The vast polar structure—a plane of satellite galaxies at the poles of the Milky Way—is at the center of a tug-of-war between scientists who disagree about the existence of mysterious dark matter, the invisible substance that, according to some scientists, comprises 85 percent of the mass of the universe.

A paper accepted for publication in the Monthly Notices for the Royal Astronomical Society bolsters the standard cosmological model, or the Cold Dark Matter paradigm, by showing that the vast polar structure formed well after the Milky Way and is an unstable structure.

The study, “Is the Vast Polar Structure of Dwarf Galaxies a Serious Problem for CDM?”— available online at the Oxford Academic: Monthly Notices website — was co-authored by Andrew Lipnicky, a Ph.D. candidate in RIT’s astrophysical sciences and technology program, and Sukanya Chakrabarti, assistant professor in RIT’s School of Physics and Astronomy, whose grant from the National Science Foundation supported the research.

Lipnicky and Chakrabarti analyze the distribution of the classical Milky Way dwarf galaxies that form the vast polar structure and compares it to simulations of the “missing” or subhalo dwarf galaxies thought to be cloaked in dark matter.

Using motion measurements, the authors traced the orbits of the classical Milky Way satellites backward in time. Their simulations showed the vast polar structure breaking up and dispersing, indicating that the plane is not as old as originally thought and formed later in the evolution of the galaxy. This means that the vast polar structure of satellite galaxies may be a transient feature, Chakrabarti noted.

“If the planar structure lasted for a long time, it would be a different story,” Chakrabarti said. “The fact that it disperses so quickly indicates that the structure is not dynamically stable. There is really no inconsistency between the planar structure of dwarf galaxies and the current cosmological paradigm.”

The authors removed the classical Milky Way satellites Leo I and Leo II from the study when orbital analyses determined that the dwarf galaxies were not part of the original vast polar structure but later additions likely snatched from the Milky Way. A comparison excluding Leo I and II reveals a similar plane shared by classical galaxies and their cloaked counterparts.

“We tried many different combinations of the dwarf galaxies, including distributions of dwarfs that share similar orbits, but in the end found that the plane always dispersed very quickly,” Lipnicky said.

Opposing scientific thought rejects the existence of dark matter. This camp calls into question the standard cosmological paradigm that accepts both a vast polar structure of satellite galaxies and a hidden plane of dark-matter cloaked galaxies. Lipnicky and Chakrabarti’s study supports the co-existence of these structures and refutes the challenge to the accepted standard model of the universe.

Their research concurs with a 2016 study led by Nuwanthika Fernando, from the University of Sydney, which found that certain Milky Way planes are unstable in general. The paper published in the Monthly Notices for the Royal Astronomical Society.