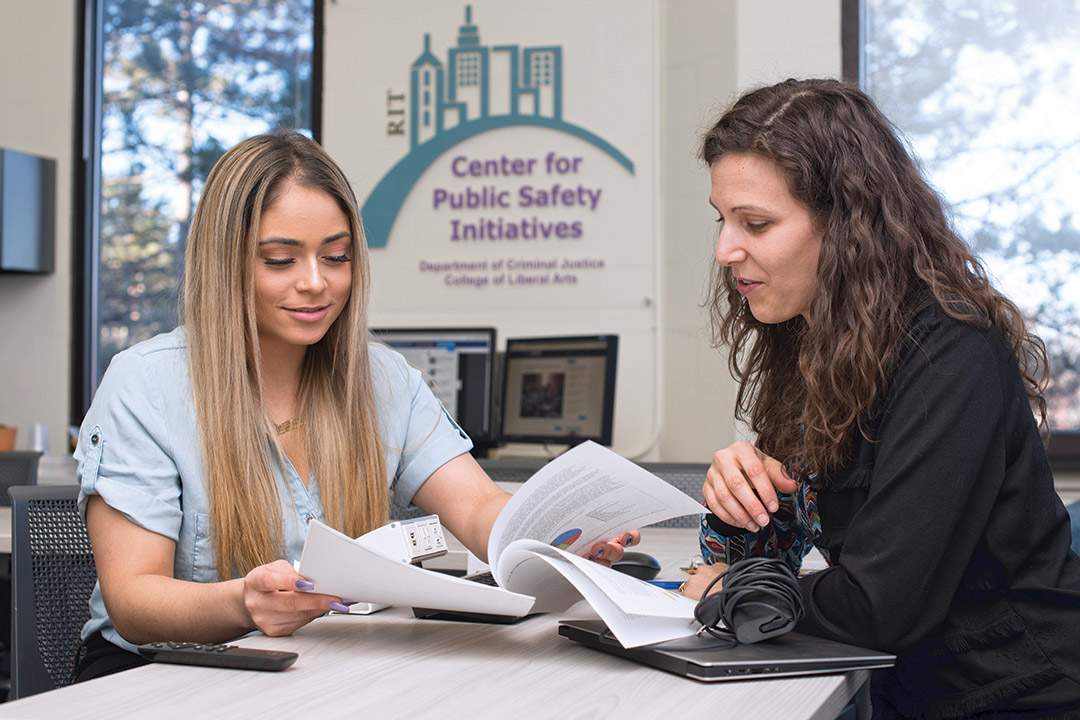 Members of RIT’s Center for Public Safety Initiatives are doing their part to help combat the opioid epidemic by determining the effectiveness of a dependency treatment program offered to inmates at the Monroe County Jail.

Their work in the jail looked at whether the Medication Assisted Treatment (MAT) program the sheriff’s department uses for inmates who use drugs is helping reduce recidivism and arrests.

Initial results from this phase of the study suggest the program has promise. The program includes prescribed medication, substance abuse counseling, case management, and a referral for continued treatment upon release.

“We’ve got to track it,” said Monroe County Sheriff’s Capt. James McGowan, operations manager at the jail. “If you just release the inmates and don’t really know what’s happening, how do you know if the programs are working or not?”

Janelle Duda-Banwar, visiting assistant professor in criminal justice, led the research. She talked with program staff weekly in their roll call room in downtown Rochester to help problem solve, identify potential inmates who could be in the program, and see how well people in the program are doing.

“We want to see how successful they are in implementing the program in the jail, and we also want to look at outcomes of people who participate in the program,” she said.

Historically, jail programs have been difficult to evaluate due to the environment, which includes different program lengths due to varying and unknown release dates, rearrests, and no similar groups for comparison.

Their evaluation focused specifically on 153 inmates accepted into the MAT program in 2019. Of those released for more than 30 days and still considered active participants, fewer than 12 percent were rearrested.

“What we’re finding is that the inmates find it extremely effective,” Duda-Banwar said. “More than 80 percent of the people in the program have never been exposed to medication-assisted treatment. Some are just starting the recovery process, some have never had drug counseling, and part of this is understanding and not being so terrified of it.”

“Everyone’s got a hand in it,” McGowan said. “These people need help and we’re trying to help them.”

Samantha Burgos, a third-year criminal justice and psychology double major from Rochester, worked as a research assistant for CPSI. She said inmates find the MAT program “extremely effective” and in one case, wrote the jail superintendent upon release to thank him for helping with his addiction.

The participating inmates also were in a dedicated part of the jail and were able to talk about their struggle with addiction with other inmates housed with them.

“They built a community and looked out for each other,” Burgos said.

In a report to the jail, Burgos and Duda-Banwar said MAT’s success would continue if modifications can be made as issues arise.

The jail’s MAT program is overseen by Tisha Smith, the jail’s director of inmate drug and alcohol programs. Smith received her bachelor’s degree in criminal justice in 2000 and her master’s degree in public policy in 2003, both from RIT. She also worked as a student in CPSI.

“I’m very proud to have been on the ground floor of the development of CPSI,” Smith said. “I know they do quality work while at the same time giving students the opportunity to do some really cool research. I look forward to working with them again.”