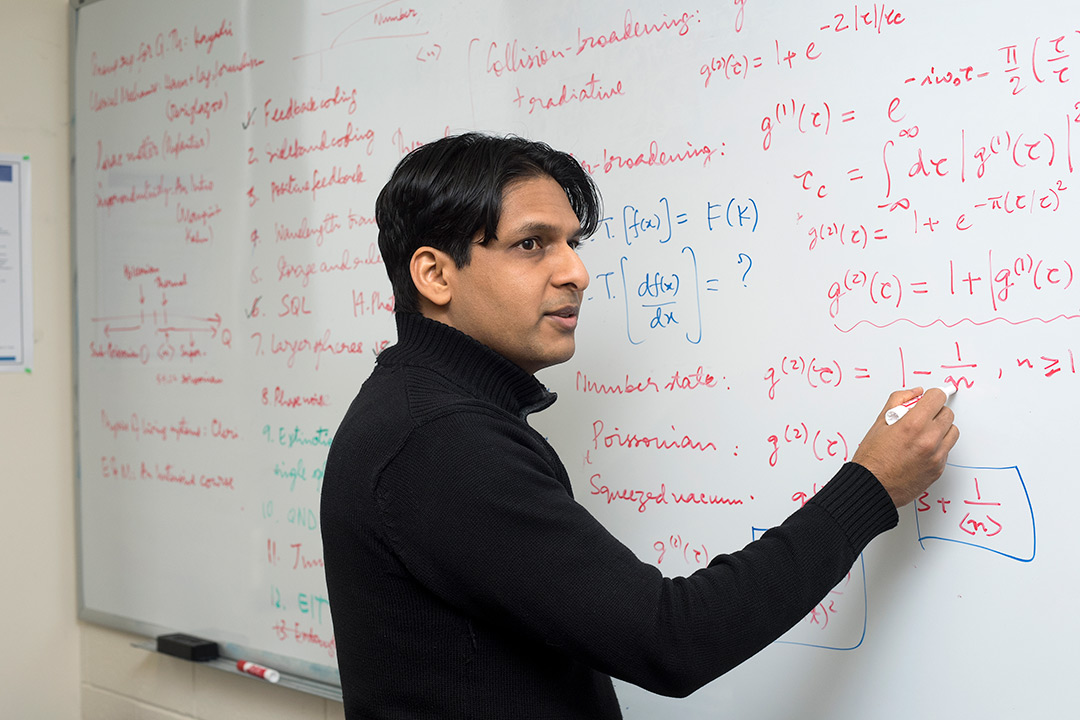 RIT researcher Mishkat Bhattacharya is building a theoretical framework to predict how nanoparticles made of graphene, silica and rare-earth compounds behave when suspended within the center of a laser beam.

A Rochester Institute of Technology researcher is building a theoretical framework to predict how nanoparticles made of graphene, silica and rare-earth compounds behave when suspended within the center of a laser beam.

Mishkat Bhattacharya, associate professor of physics at RIT and a member of the Future Photon Initiative, is collaborating on a multi-university project exploring quantum science in levitated mechanical systems. The four-year grant is funded by the U.S. Department of the Navy’s Office of Naval Research. RIT received $500,000 for its role in the University of Rochester-led project, which includes Yale University, Northwestern University, University of Washington and University of Maryland.

Bhattacharya seeks to understand the overall parameters for creating and sustaining a quantum state with levitated optomechanics. His theoretical work will model advanced sensing designs based on the “optical tweezers” technique. This groundbreaking invention in laser physics won Arthur Ashkin at Bell Laboratories half of this year’s Nobel prize in physics.

Optical tweezers use radiation pressure exerted by photons to push and trap particles inside a laser beam. The tool allows scientists to study tiny particles freed from a supporting substrate and to measure their properties without interference.

“This is an important area for developing student expertise,” Bhattacharya said. “The upcoming 10-year National Quantum Initiative Act has already been passed by the House of Representatives and is currently being considered by Congress.”

Passage of the $1.275 billion initiative would prioritize the research and development of quantum information science and technology, ensuring the United States’ leadership in the quantum sector and enhancing national security.