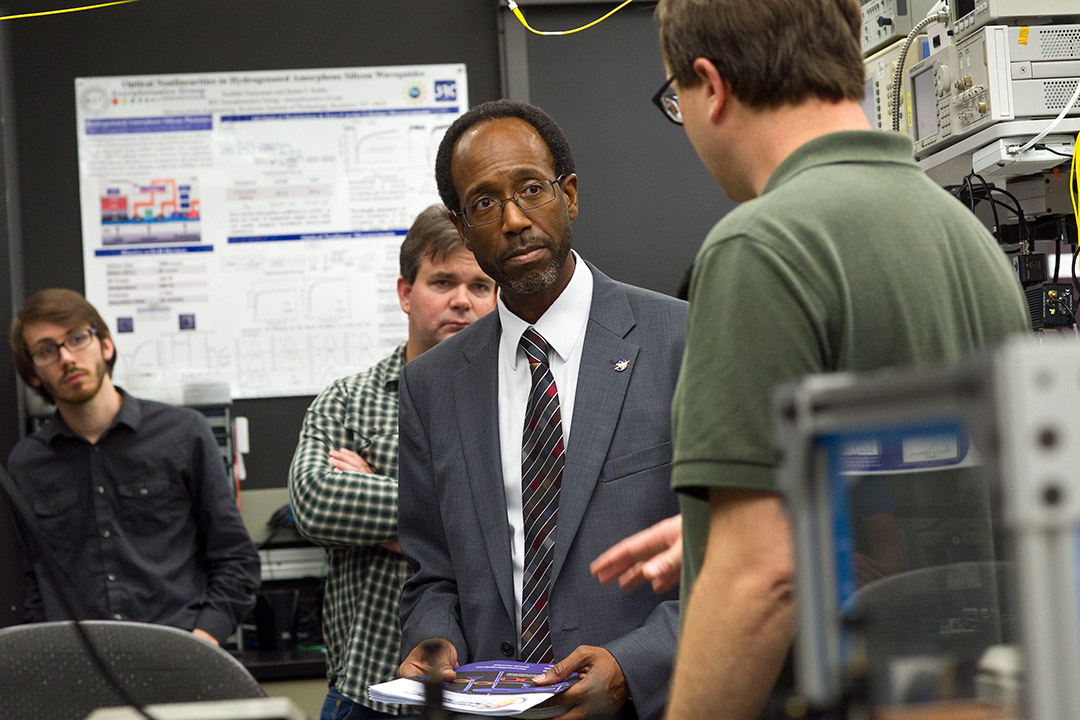 Clayton Turner ’90 visited RIT recently and talked with researchers in the Center for Detectors.

Clayton Turner ’90 (electrical engineering) has been named the new director of NASA’s Langley Research Center in Hampton, Va. He will assume the director’s position on Monday, Sept. 30, when current center Director David Bowles retires after 39 years with the agency.

Turner will also be recognized this fall as a distinguished alumnus for RIT’s Kate Gleason College of Engineering. The award is given to alumni who have performed at the highest level of his or her profession and advancement of civil and philanthropic endeavors.

Since 2015, Turner has served as Langley’s deputy center director. As center director, he will lead a diverse group of about 3,400 civil servant and contractor scientists, researchers, engineers and support staff, who work to make revolutionary improvements to aviation, expand understanding of Earth’s atmosphere and develop technology for space exploration.

“Clayton’s wide range of engineering and leadership experience will serve Langley and the agency well as our Artemis program works to send astronauts to the moon by 2024 to prepare to go to Mars,” said Jim Brindenstine, NASA administrator, in a statement.

Prior to his appointment as deputy center director, Turner served as the associate director responsible for managing daily operations with a focus on center commitments. In this capacity, he was responsible for aligning Langley’s institutional resources and infrastructure to meet current and future NASA mission needs. Turner also served as director of the Engineering Directorate at Langley. In this capacity, he was responsible for the conceptualization, design, development and delivery of ground and flight systems and for designing, enabling and implementing engineering capabilities to meet NASA missions.

Turner began his career with NASA in 1990 by serving as a design engineer with the Lidar In-Space Technology Experiment project, where he spearheaded development of the laser aligning, bore-sight limit system. Over the next 29 years, Turner served in various roles with progressively increasing responsibility, leading the agency’s engineering contributions to many successful flight projects, including: the Earth Science Cloud-Aerosol Lidar and Infrared Pathfinder Satellite Observation Project; the Earth observing technology development Gas and Aerosol Monitoring Sensorcraft Project; the materials technology development Gas Permeable Polymer Materials Project; the Space Shuttle Program Return-to-Flight; the flight test of the Ares 1-X rocket; the flight test of the Orion Launch Abort System; and the entry, decent and landing segment of the Mars Science Laboratory.