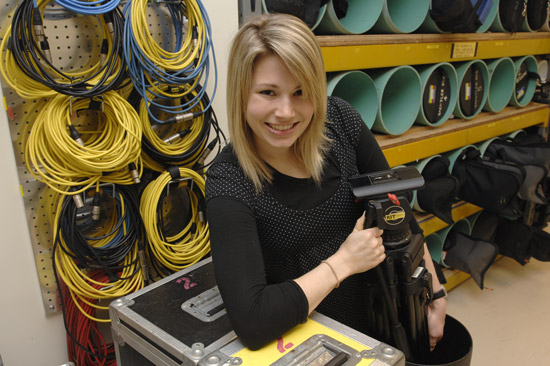 The Princess Grace Foundation-USA has awarded Lindsay Berkebile a 2009 Princess Grace Award. Berkebile is one of only two undergraduate students from across the country to win this national award in the film category.

Lindsay Berkebile, a film and animation student at Rochester Institute of Technology, is the winner of a 2009 Princess Grace Award. The Princess Grace Foundation-USA, named in honor of Princess Grace Kelly of Monaco, gives annual awards to aspiring artists from across the country in theater, dance and film.

Berkebile, a fourth-year student in RIT’s School of Film and Animation, will be among those honored on Oct. 21 at a black-tie gala event in New York City attended by HSH Prince Albert II of Monaco.

As part of her award, Berkebile receives a scholarship for the making of her senior thesis film. She is one of only two undergraduate students from across the country to win a 2009 Princess Grace Award in the film category.

“I didn’t expect to win,” says Berkebile. “It’s still sinking in. Making films is something I would be doing no matter what. It’s a way for me to express myself. Filmmaking is the only medium that captures my talent in using the technical side of my brain and the artistic side. I’m a people person, and I love directing my crew. Filmmaking is a collaboration and I get to work with some of the brightest minds I’ve ever met.”

Her senior thesis film will be about a baker who lives in a make-believe world and creates fantastical cakes. The film’s format will be live action using stop-motion animation and pixilation effects.

Berkebile submitted a reel of her work to the Princess Grace Foundation selection committee. Among her submissions was Life by the 7’s, an experimental pixilation/animation film that Berkebile produced centering on the subjects of food, weight and anorexia.

“It was a very personal piece for me,” says Berkebile. “The film looks at the emotions that surround anorexia and the struggles with any mental disorder. The film is a stop-motion animation that doesn’t use animated puppets, but real people and objects.”

Another film she submitted was Harold Please, a live-action film about a recluse named Harold whose only connection to the outside world is what he sees through his window.

Berkebile adds: “To me, describing an emotion with words seems inadequate. But to express an emotion visually, I’m able to reach a wider audience. It’s powerful.”

Since 2000, the Princess Grace Foundation has recognized RIT student filmmakers eight times in the film category bestowing either Princess Grace Awards or honorarias.

RIT students are in great company. Other past film recipients of the Princess Grace Award include Stephen Hillenburg, creator of SpongeBob SquarePants, Greg Mottola, director of Adventureland and Superbad, and Cary Joji Fukunaga, writer and director of Sin Nombre.

In addition to the awards, the Princess Grace Foundation-USA also gives each nominating organization monies toward its fundraising efforts, in this case RIT’s School of Film and Animation is a recipient.