Hundreds of veterans, active military personnel, their families, and ROTC cadets to attend 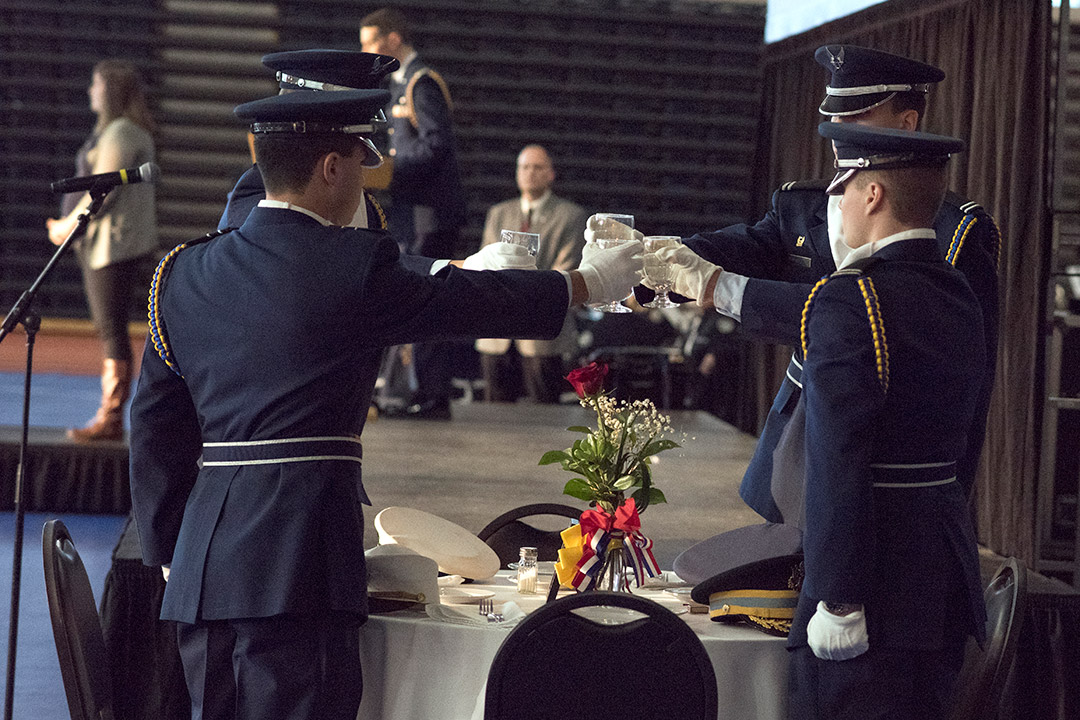 A solemn part of RIT’s Veterans Day Breakfast is the POW/MIA table, honoring those who have not returned from service.

Rochester Institute of Technology is holding its 11th annual Veterans Day Breakfast from 8 to 10 a.m. on Friday, Nov. 11, in the Gordon Field House.

It is free and open to the community.

Hundreds of veterans, active military personnel, ROTC cadets, and their families are expected to attend this annual event to commemorate those who served this country. Several local elected officials are also expected.

There are 242 RIT students who are military veterans, as well as 150 ROTC students on campus.

RIT President David Munson will open the program at 8 a.m.

Keynote speaker will be Chad Van Gorder, director of RIT’s new Office of Veteran Student Success, who served in the Army for 21 years. He will reflect on the sense of purpose experienced when serving the country, and what it means to find purpose again once military service is complete.

“Veterans Day is a day to celebrate the service and sacrifice of our service men and women supporting the safety and security of our nation,” Van Gorder said.

He said less than 1 percent of Americans choose to serve in the military.

“But that choice can be the most rewarding and most difficult choice of their lives,” he said. “Our Veterans Day Breakfast is an excellent way to start the day to reflect on and honor that service.”

At approximately 8:45 a.m., the Pittsford Fireman’s Band will recognize veterans of World War II, Korea, Vietnam, and other conflicts by playing the anthems of the various branches of the military, as members from the Army, Marine Corps, Navy, Coast Guard, and Air Force stand.

There will be a military vehicle on display and information tables from more than 20 organizations, including those from Veterans Outreach Center, RIT Veterans Club, Cancer Support Community at Gilda’s Clubs (support group for veterans), and the American Red Cross.

Two awards will also be presented. The Service after Service Award is given annually to a veteran who has demonstrated a steadfast commitment of service to others following their military service. And the Veterans Upward Bound Resiliency Award is given to a graduate of the program who has demonstrated perseverance, overcoming obstacles while making meaningful impacts in their education and on others in the community.

For more information or to RSVP, go to the Veterans Day Breakfast webpage or call Nicole Prahler at 585-475-7814.