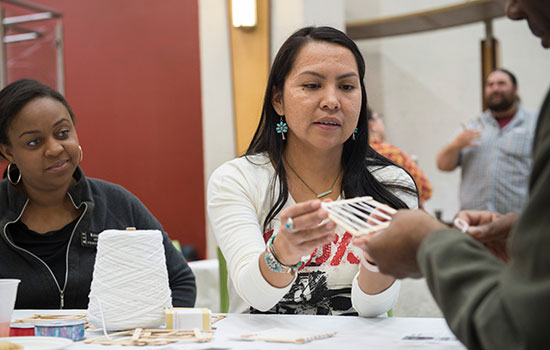 Winds of Change magazine recognized Rochester Institute of Technology as one of the Top 200 Colleges for Native American Students.

This marks the eighth time RIT made the annual list, published by American Indian Science and Engineering Society (AISES). The magazine ranked top universities in the U.S. “where American Indians are going to school in significant numbers and where the community, Native programs and support are strong enough for these students to enjoy college and stay on to graduate.” RIT is one of nine colleges from New York state to make the list.

“Consistently being recognized on this list year after year is a reflection of our investment in our Native American students,” said Nicole Scott, co-director of the Native American Future Stewards Program. “We really care; we are not here to simply get numbers. We make personal investments and make lifelong connections to our students. We love reconnecting with former students when we see them at events like AISES conferences and always want to hear about them after they graduate.”

The Seneca Art & Culture Center at Ganondagan State Historical Site is a key community partner. Located east of RIT, it is a resource for students to learn about the culture and history of the Senecas, one of the six nations of the Haudenosaunee Confederacy. RIT frequently engages with Ganondagan through educational connections, research initiatives and other collaborations.

The NAHM events culminated in a keynote address by photographer Matika Wilbur, who discussed Project 562, her multi-year project to photograph people from all federally recognized tribes in the United States and beyond. Citing statistics that show Native Americans are drastically underrepresented nationally at college and face daunting social barriers, she sees her work and programs like NAHM as an opportunity to create a new narrative. “I ask you all to join us in our efforts to recruit and support young Native American students at places like RIT,” said Wilbur.