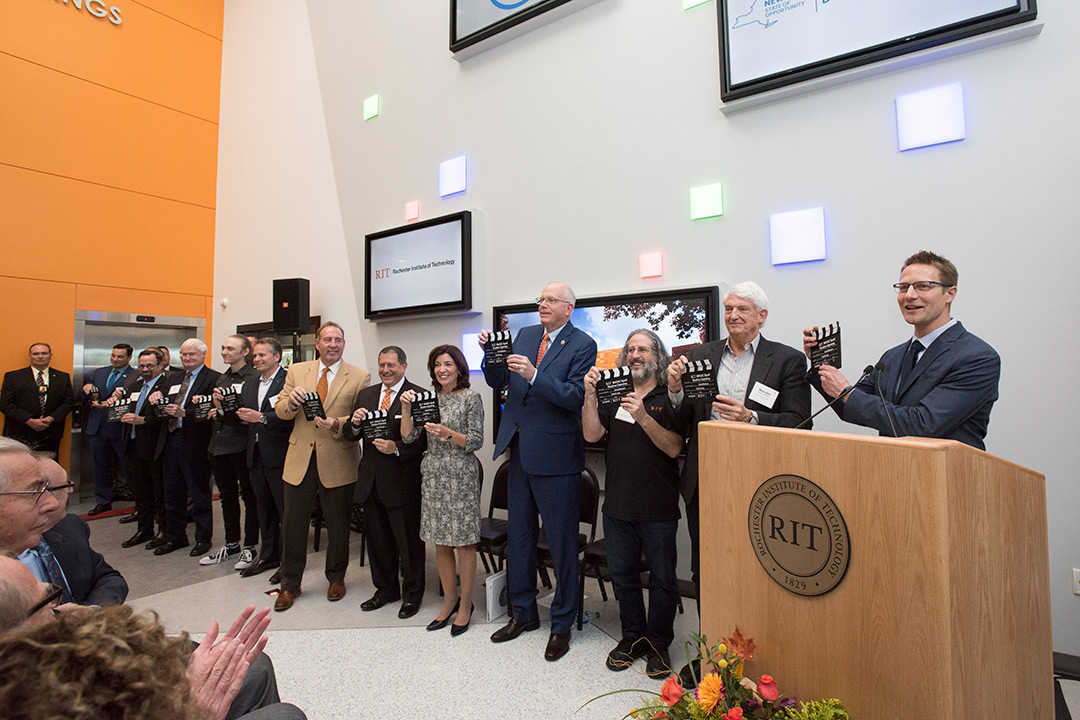 Tours and hands-on experiences were the order of the day as Rochester Institute of Technology formally opened the newest building on campus—the 52,000-square-foot MAGIC Spell Studios.

The building is the crown jewel in a program launched five years ago by former director Andrew Phelps to bring together RIT’s academic strengths in game design and development, film and animation, and digital media. The new facility—the only one of its kind in the Northeast—boasts the latest in technology and design, rivaling media production studios in New York City and Hollywood.

“MAGIC Spell Studios will be a wonderful resource for our students and also will serve as an economic engine for the Finger Lakes region and New York state,” said RIT President David Munson. “The programs, labs and studios in MAGIC Spell will help build and retain a vibrant workforce and send exciting products into the marketplace. Our sincere thanks to Governor Andrew Cuomo; Empire State Development; our state Assembly and Senate  delegation; and partners Dell, Cisco, the Wegman Family Foundation, and Austin McChord for the support that has made this magnificent facility a reality.”

“MAGIC Spell Studio is a great example of how partnerships between academia and the public and private sectors are helping New York’s innovation economy thrive.” Gov. Andrew Cuomo said. “This state-of-the-art studio will support the transformation of the Finger Lakes’ regional economy as it continues to move forward.”

“This new facility at RIT will merge film and higher education for a unique partnership that will accelerate the industry and provide great opportunities for students,” said Lt. Gov. Kathy Hochul. “MAGIC Spell Studios will create a hub for animation and design in the area, support start-up companies and generate new jobs. This investment as part of the Regional Economic Development Councils will accelerate economic growth and innovation and continue to move the Finger Lakes forward.”

“RIT’s MAGIC Spell Studios will leverage its unrivaled academic programming with groundbreaking digital media research and development that will help propel our region to the forefront of one of the fastest growing sectors in the U.S. economy,” said Assembly Majority Leader Joseph D. Morelle. “I have been proud to support the growth and development of this truly exciting endeavor, and I look forward to the studio quickly becoming a centerpiece of our region’s flourishing high-tech economy.”

The grand opening caps five years of success for MAGIC, that includes the launch of several products, partnerships with industry and a central role as a New York State Digital Gaming Hub.

David Long, director of MAGIC Spell Studios, said the new building is designed to physically bring together students and faculty from different disciplines. Students can walk in with ideas for film and animation, games and digital media and walk out years later with a marketable product. They spend the time in between using the state-of-the-art resources in the building to make it.

That’s a win not only for the university, but for the state, he added. When students commercialize their work, it will ultimately result in a boost to the economy with the creation of new companies and new jobs in the upstate New York region.

“MAGIC Spell Studios represents a truly unique research and design space for a university campus,” Long said. “The studio stands at the fusion of games and film, advancing the multidisciplinary creativity that is at play across these converging disciplines. At MAGIC Spell Studios, we believe that we learn by making. By mixing critical thinking and making with advanced technical design and foundational research, the work we produce will allow us to lead higher education and produce creations and creators that will impact the industry and the economy. Storytellers, artists, programmers and engineers will all work together to create content that educates, inspires and entertains.”

In addition, the assets of MAGIC extend beyond the building to help entrepreneurs and start-ups develop new products and spur economic growth throughout the state.

As part of MAGIC Spell Studios, outside companies can book commercial projects and will also be invited to campus to expand and work in a dedicated collaborative partner suite. Aaron Gordon ’13 (film and animation) has done that with his Rochester-based production company Optic Sky. Optic Sky used the sound stage, which meets the requirements for the New York state film tax credit, to shoot a commercial. And Forbes Media is the first in-residence company that is providing experiential learning opportunities for students.

“This is just the tip of the iceberg when it comes to having student games published and film and animation projects produced,” Long added. “We are looking forward to growing our network of industry partners and continuing to be recognized for the value that MAGIC Spell Studios provides.” 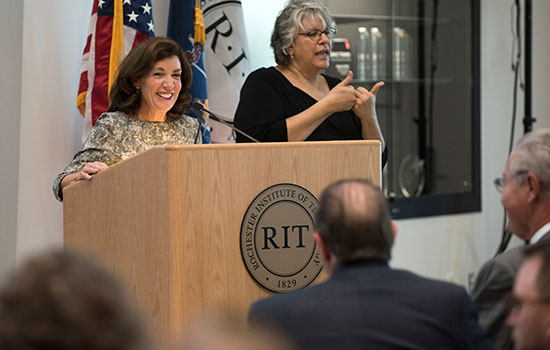 Lt. Gov. Kathy Hochul attended the grand opening and emphasized that MAGIC Spell Studios will create a hub for animation and design in the area, support start-up companies and generate new jobs. “This investment as part of the Regional Economic Development Councils will accelerate economic growth and innovation and continue to move the Finger Lakes forward.” A. Sue Weisler 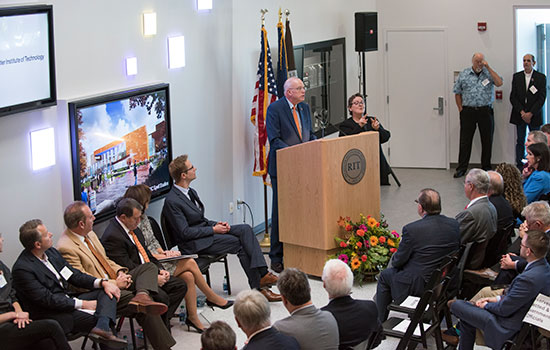 RIT President David Munson thanked New York state representatives, as well as the Wegman Family Charitable Foundation, Dell, Cisco, and RIT trustee and alumnus Austin McChord, who all made significant contributions to ensure that MAGIC Spell Studios is equipped to the professional standards needed. “MAGIC Spell Studios is a model initiative for RIT’s $1 billion capital campaign and a signature example of how that campaign will indeed ‘Transform RIT,” said Munson. A. Sue Weisler 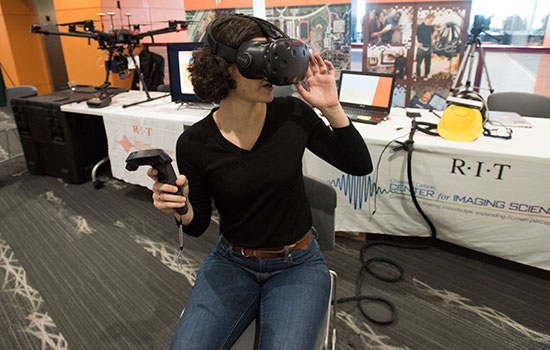 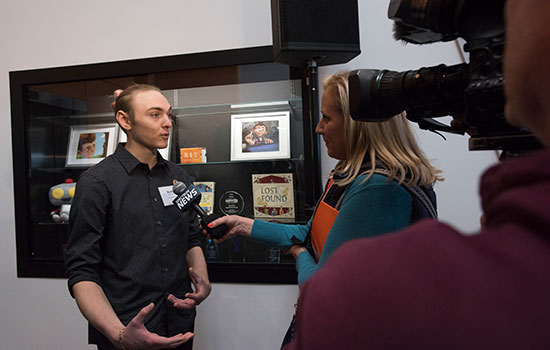 Noah Ratcliff, a fourth-year game design and development student from Columbus, Ohio, is interviewed by media following the official grand opening of RIT’s MAGIC Spell Studios building. Ratcliff, who addressed the crowd during the formal program, talked about how RIT has presented him with opportunities and encouraged creatively driven students to become involved with MAGIC Spell Studios. A. Sue Weisler