RIT President David Munson is asked anything and responds on Reddit 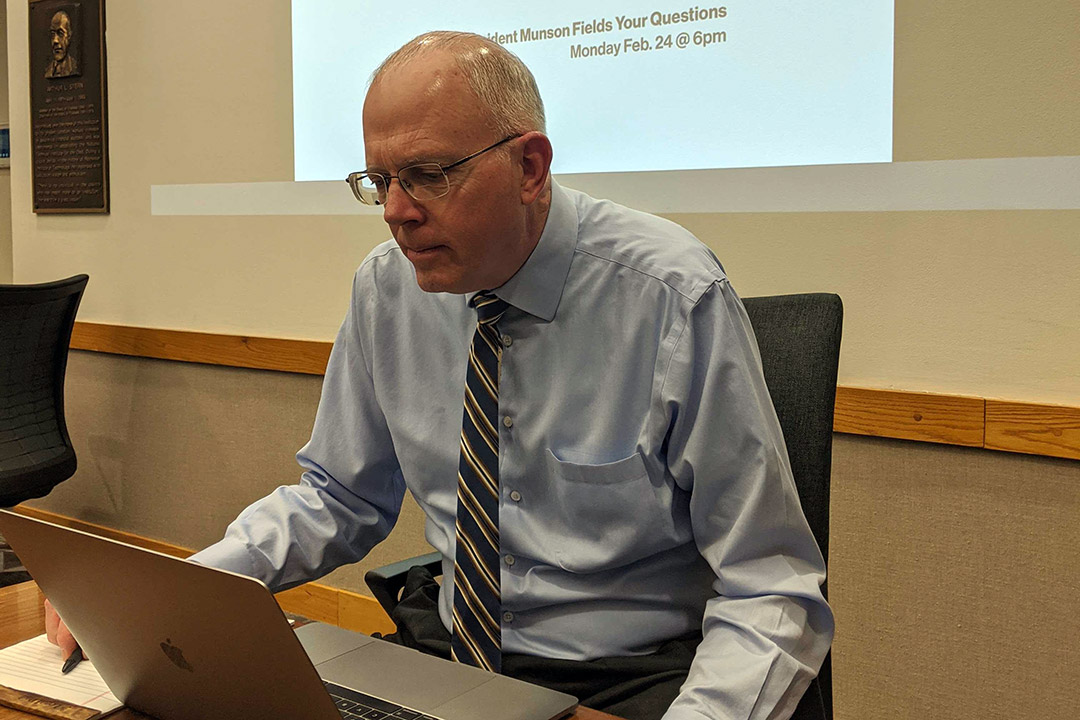 Rising tuition, scheduling a snow day each semester, and performing arts were just some of the topics Rochester Institute of Technology President David Munson addressed in an “Ask Munson Anything” session Monday on Reddit.

Munson chose the social media platform as another avenue to engage with the RIT community and answer their questions. The questions were also helpful for Munson to understand what’s on the minds of students, faculty, staff and alumni.

A student asked how he plans to address parking issues.

Munson said RIT has studied building parking garages, “but we are delaying that for as long as possible due to the high cost — $30,000 per space — and also because parking garages deteriorate in our climate due to salting of the roads in wintertime.”

Munson was asked about why RIT tuition rises 3 or 4 percent each year.

“Student debt is a heavy burden,” he replied. “I am very cognizant of the cost of learning. To help with that, this current year RIT is providing about $220 million in financial aid to our student body. Over the last many years, the increase in this amount has considerably exceeded the rate of tuition increase. That said, we’d like to offer even more financial aid. That’s why the number one fundraising priority in our current $1 billion blended campaign is for student support. Every student should ask themselves what is the value of their education. I do know that while the cost has increased each year, and will increase in the future, that cost should be weighed against other factors. Important factors are that multiple publications rate us highly for return on investment, we have an incredible co-op program and network, and our graduates generally receive multiple job offers and command impressive starting salaries. I know that the situation is different for each student, but what I can stress is that we will do our best to work with you to help you manage your finances so that you walk out of here believing your investment was worth it.”

A parent with an incoming freshman asked about on-campus housing options.

“We continuously strive to improve housing options,” Munson said. “Last summer, RIT Housing renovated one of the Riverknoll buildings (our least expensive housing). An assessment is complete and a determination on how to proceed with Riverknoll is underway. We are trying to ensure better response times around housing issues. We have a project called the Enterprise Service Center. It will give students easier access through phone and email to have their concerns addressed. Students will still be able to contact staff directly and walk-in to the office located in Grace Watson Hall.”

And while it is not RIT housing, the new APEX complex being built on John Street should help to alleviate some of the issues, he said. APEX is expected to open in the fall of 2021 with 900 bed spaces.

One student suggested building a snow day into the calendar each semester so a make-up day isn’t needed if classes are canceled due to weather. If it’s not used, it could be used as a second reading day.

Munson said RIT is regulated by the State Department of Education which mandates a minimum number of class meeting days. “We are currently at that minimum, so adding snow days would extend the semester and shorten the period available for other activities, such as co-op, international experiences and summer jobs. So it’s a tradeoff.”

One question concerned overcrowded campus shuttles between 5 and 7 p.m. Munson said he would ask transportation staff to investigate.

A questioner commented that several posted questions seem to take “an extremely cynical view of either you or the university as a whole.”

Munson replied that questions from forums tend to be more negative than when he hears from the student population at large, but he said he’s fine with students questioning the status quo. “I encourage it,” he said. “I look at the world in a positive light and work on solutions. I hope that, by openly sharing what we wish to accomplish and explaining some of the rationale, people will realize we are working toward a common greater good.”

Another questioned whether any of the $1 billion blended campaign will be used to renovate Gleason Hall. Munson said little of the money being raised will go toward renovation projects.

“We may be able to garner some limited funding from New York state that could help in this regard, but philanthropists seldom are willing to make donations for renovation,” Munson said. “We pay for renovations and building improvements via reserve left over at the end of each budget year. We are working to build this reserve pool, which will allow us to undertake a more robust program of renovation in the future.”

There were several light-hearted questions and answers as well. Munson was asked if he would be making a rap video. “I am having my MC Hammer pants pressed at the dry cleaners. Maybe when they come back.”

“What’s your favorite thing to eat on campus?” another asked.

“Dinosaur Bar-B-Que, tacos, the Friday fish fry and Ben & Jerry’s ice cream. I’m a health nut,” was the reply, as his wife, Nancy, shook her head.

Munson also noted that his Reddit “Ask Munson Anything” sessions aren’t the only way to ask him questions. He participates each quarter on a question-and-answer show WITR radio, he and Nancy host regular fireside chats (the next is scheduled for 4 p.m. April 8 in the Mosaic Center), and he can be reached via email at munson@rit.edu.

“I’m always eager to speak with students, both formally and informally, to solicit your suggestions and to better understand issues,” he said.