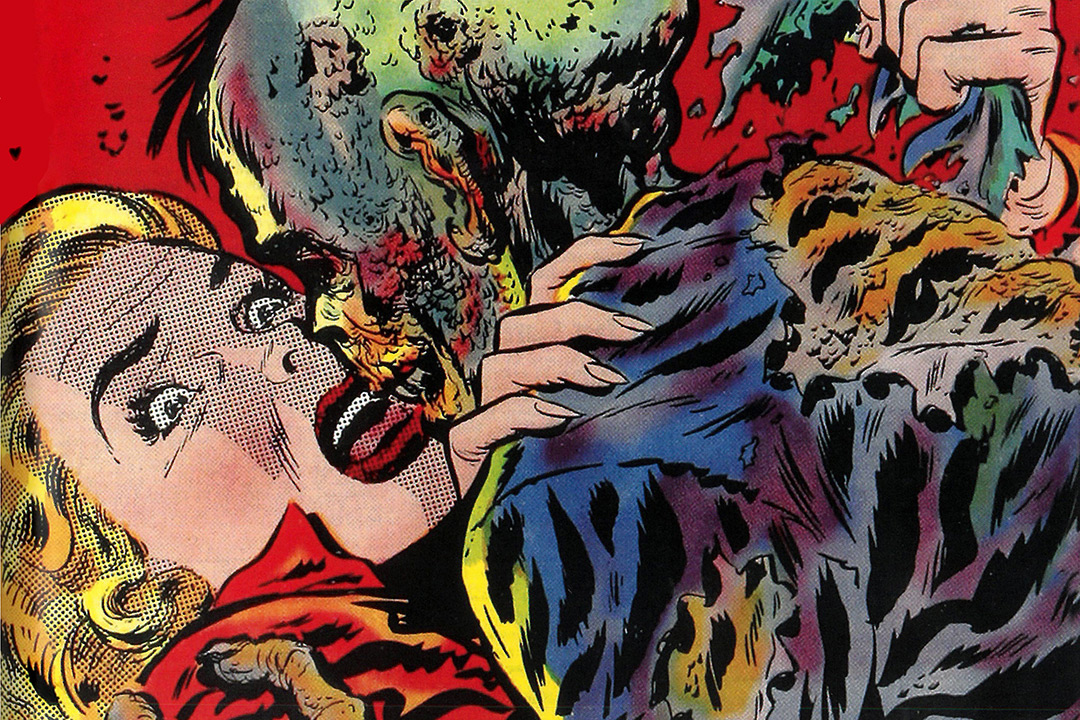 Detail from cover of Chamber of Chills, no. 23, Harvey Comics, 1954. Featured in The Comics Scare Returns.

From cultural pariah to pop-culture cool and multimedia phenomenon, horror comics have had a bumpy road to mainstream America but now wield an undeniable influence.

Terrence Wandtke explores the genre in The Comics Scare Returns: The Contemporary Resurgence of Horror Comics, published by RIT Press, and finds truth in the trope all horror fans know: “The monster is never dead.”

Wandtke shows just how far the horror genre has come from the tightly regulated days in the mid-1950s to the Oscar-winning best picture in 2017, The Shape of Water. Acclaimed for his role as “Amphibian Man,” Doug Jones provides an ironic foreword based on a career playing monsters, from the misunderstood to the truly evil.

Humanity’s thirst for a safe scare is rooted in folklore, adventure and gothic novels, and fueled the pulp fiction and horror radio shows that set the stage for the “horror comic boom,” Wandtke writes. An eager young audience in 1950s America consumed edgy comics like The Vault of Horror, Tales from the Crypt and The Chamber of Chill. Horror comics outsold Superman and Batman four to one, and terrified adults. Public protests conflated crime and horror comics with communism, and the “comics scare,” took hold. According to Wandtke, congressional pressure to sanitize the newsstand led to “the prohibition on horror” and the Comics Code, which snuffed out crime comics and forced horror underground.

“The 1950s Comics Code that targeted crime comics also and perhaps more directly targeted horror comics,” Wandtke said. “The story of horror comics from that time to now is a different story that just happens to run parallel and intersect with that of crime comics.”

Horror comics regained traction with the easing of industry regulations in the later 20th century and “flourished” in the direct market through specialty bookstores and online purchases. Wandtke attributes the revival to comics creators Alan Moore (Return of the Swamp Thing, V for Vendetta, Watchmen), Neil Gaiman, (The Sandman, Black Orchid) Mike Mignola (Hellboy) and Robert Kirkman (The Walking Dead, Marvel Zombies), among others. According to Wandtke, horror comics helped sustain industry sales when the superhero’s collector market took a nose dive in the 1990s. The genre serves no master and critiques the comics industry and widespread anxieties.

“Horror comics can be very sophisticated (like Neil Gaiman’s The Sandman) and they can also be very funny (like Eric Powell’s The Goon), Wandtke said. “Some monster stories distance us from the horror of terrible things and allow us to laugh at the human condition. And this is important because taking ourselves too seriously can keep us from seeing the truth.”

The Comics Scare Returns marks the fifth volume in the RIT Press’ Comics Studies Monograph Series and is Wandtke’s companion study to his 2015 work, The Dark Night Returns: The Contemporary Resurgence in Crime Comics (RIT Press).