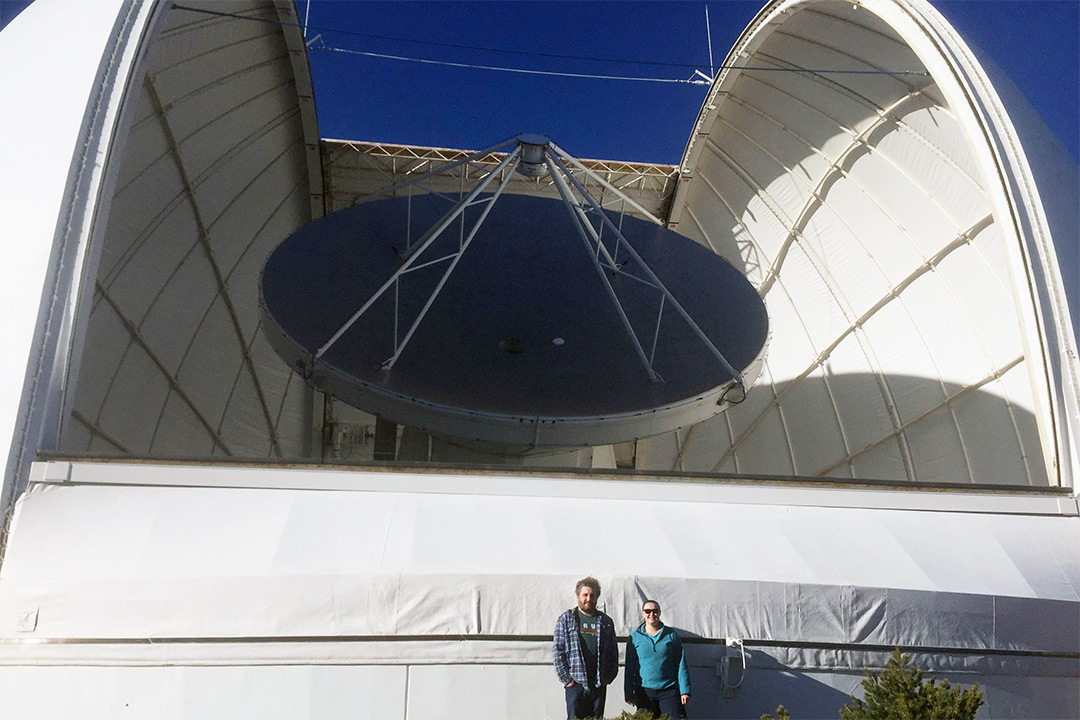 Michael Zemcov, left, and Victoria Butler, right, recently deployed an instrument at the Arizona Radio Observatory on Kitt Peak to help with the TIME experiment.

While many people flock to warm destinations for spring break, two Rochester Institute of Technology experimental cosmologists spent theirs 6,800 feet high on snow-covered Kitt Peak at the Arizona Radio Observatory. They were deploying an instrument to a 12-meter telescope for a project called the Tomographic Ionized-carbon Mapping Experiment (TIME), which aims to study the universe’s first stars and galaxies.

The experiment uses a technique called intensity mapping to detect very low energy light waves from dust and gas in the early universe. The goal is to answer fundamental questions about the universe: how and when did the first stars and galaxies in the universe form? What were these first stars made out of? How much energy did they release?

“We have a good understanding of the properties of galaxies up to about 10 billion years ago,” said Victoria Butler, an astrophysical sciences and technology Ph.D. student from Jefferson, Maine, who has been working on TIME for the past two years. “After that time, and for a narrow window in the history of the universe, they are much harder to see with other instruments. TIME is able to look at the gas and dust within these galaxies, allowing us to see what was fueling star formation, how much of it was there, where it was located, and how it transformed through that time period.”

Butler has been working on implementing software designed to control the instrument under the guidance of Assistant Professor of Physics Michael Zemcov, who has been a TIME co-investigator since 2014. Parts of the instrument were designed and built at RIT’s Center for Detectors by a group of senior RIT engineering students as part of their final project in collaboration with Ryan Kavanagh, a first-year physics student from Fairport, N.Y.

Butler spent 10 weeks on Kitt Peak testing to see how well TIME’s detectors could see Mars, Venus and Jupiter during an engineering run. Since the planets are relatively bright, they make it easy to see how well focused the telescope and instrument optics are, whether or not they are centered within the image and which of the almost 2,000 detectors were able to see them. The detectors used by TIME are bolometers cooled to almost -460 degrees Fahrenheit. These extreme temperatures make the detectors more sensitive to small changes in energy caused by the collected photons.

The engineering run was a success despite challenges caused by snowstorms that caused officials to evacuate the mountain and downed powerlines. Zemcov, who joined Butler on Kitt Peak for a week in March, remarked how the mundane aspects of life can be the biggest obstacles to advanced science. “It’s funny to think we’re trying to detect photons from the other side of the universe and what is really limiting us is the bad weather, the fact people have to stay in cabins on top of the mountain, and getting power to the telescope,” he said.

TIME is now returning to its lab back at Caltech where improved detectors are being developed for the first observation run in the winter of 2019. In the meantime, the researchers will analyze data collected from this run to determine noise properties of the instrument and telescope that would make it harder to see the science objects we are looking for.