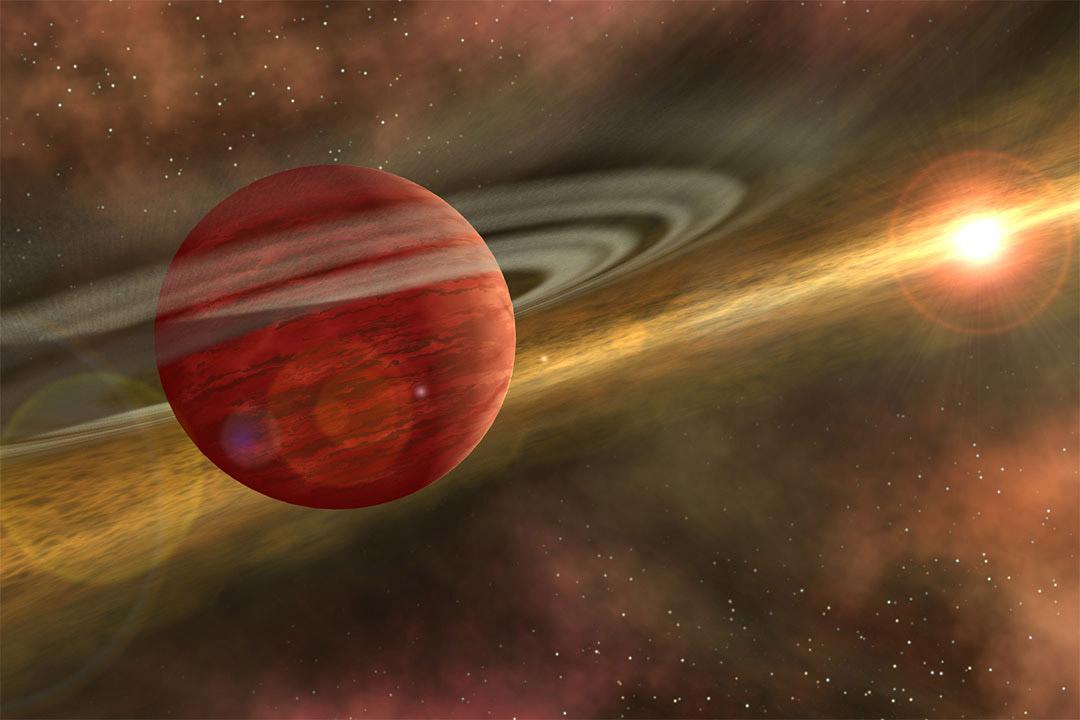 Artist's conception of a massive planet orbiting a cool, young star. In the case of the system discovered by RIT astronomers, the planet is 10 times more massive than Jupiter, and the orbit of the planet around its host star is nearly 600 times that of Earth around the sun.

Scientists from Rochester Institute of Technology have discovered a newborn massive planet closer to Earth than any other of similarly young age found to date. The baby giant planet, called 2MASS 1155-7919 b, is located in the Epsilon Chamaeleontis Association and lies only about 330 light years from our solar system.

The discovery, published in the Research Notes of the American Astronomical Society, provides researchers an exciting new way to study how gas giants form.

“The dim, cool object we found is very young and only 10 times the mass of Jupiter, which means we are likely looking at an infant planet, perhaps still in the midst of formation,” said Annie Dickson-Vandervelde, lead author and astrophysical sciences and technology Ph.D. student from West Columbia, S.C. “Though lots of other planets have been discovered through the Kepler mission and other missions like it, almost all of those are ‘old’ planets. This is also only the fourth or fifth example of a giant planet so far from its ‘parent’ star, and theorists are struggling to explain how they formed or ended up there.”

The scientists used data from the Gaia space observatory to make the discovery. The giant baby planet orbits a star that is only about 5 million years old, about one thousand times younger than our sun. The planet orbits its sun at 600 times the distance of the Earth to the sun. How this young, giant planet could have ended up so far away from its young “parent” star is a mystery. The authors hope that follow-up imaging and spectroscopy will help astronomers understand how massive planets can end up in such wide orbits.

The co-authors of the paper were Emily Wilson, an astrophysical sciences and technology Ph.D. student from King of Prussia, Pa., and Joel Kastner, a professor in RIT’s Chester F. Carlson Center for Imaging Science and School of Physics and Astronomy. For more information, read the full study on the Research Notes of the AAS website.