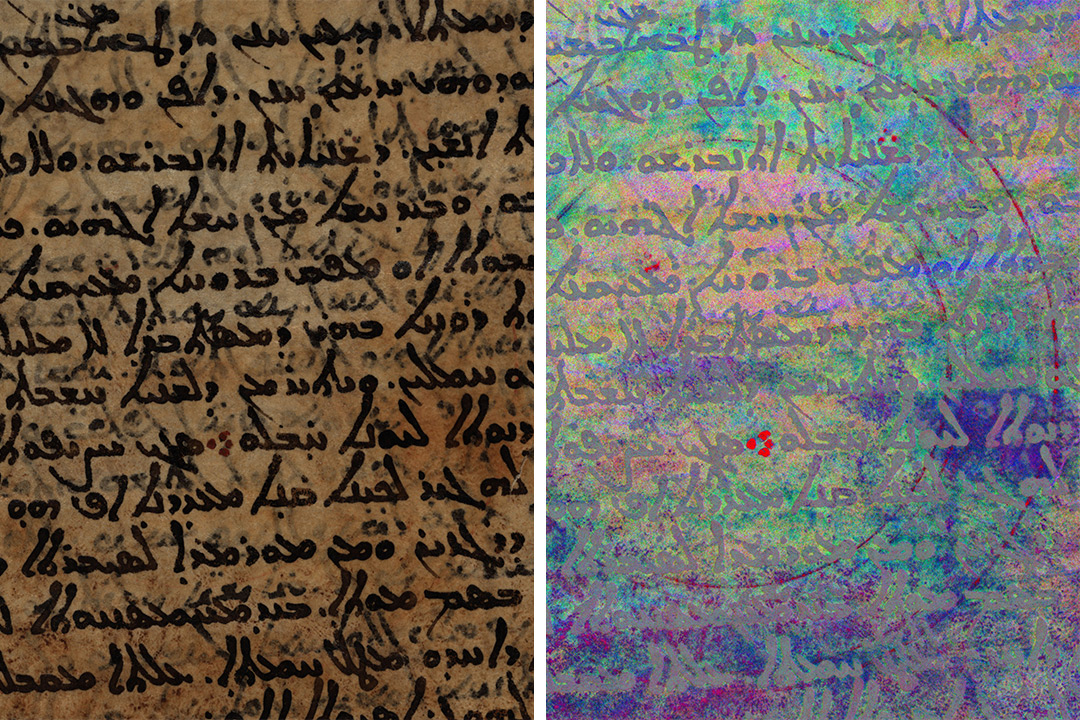 Scientists from RIT’s Chester F. Carlson Center for Imaging Science used multispectral imaging to help uncover Hipparchus’ Star Catalogue, believed to be the oldest astronomical map. On the left is the palimpsest as it appears to the naked eye, and on the right are some of the map’s original graphics revealed through multispectral imaging. Credits: Museum of the Bible Collection/ Spectral imaging by the Early Manuscripts Electronic Library, the Lazarus Project of the University of Rochester and the Chester F. Carlson Center for Imaging Science of the Rochester Institute of Technology.

Scientists uncovered what they believe to be the first astronomical map. The discovery, outlined in recent studies published in the Journal for the History of Astronomy and the Classical Quarterly, was made in part thanks to multispectral imaging conducted by researchers at Rochester Institute of Technology’s Chester F. Carlson Center for Imaging Science.

More than 2,100 years ago, the Greek astronomer Hipparchus attempted to outline the exact locations of stars when he created his Star Catalogue. But parchment was valuable and hard to come by, so eventually Hipparchus’ original writing was scraped away and the parchment was reused for another document, a process known as creating a palimpsest. Today, scientists can use multispectral imaging—collecting images in many wavelengths of light—to reveal erased text on palimpsests that is otherwise invisible to the human eye.

RIT Professor Roger Easton is an expert in multispectral imaging who has used the technique to help make discoveries related to ancient Jewish texts like the Dead Sea Scrolls, the oldest known copies of text by Archimedes, and the 15th-century Martellus Map that may have influenced Christopher Columbus. Easton and a team of RIT students were asked to image an ancient Greek palimpsest known as the Codex Climaci Rescriptus in 2016 at the Museum of the Bible in Oklahoma City. Later when processing the images they collected, he was startled to find the imaging revealed detailed drawings.

“That was a total surprise to me,” said Easton. “That was the first example of a graphic that we’d seen in this book, and that got the scholars I was working with excited, too.”

The images were eventually pieced together to reconstruct Hipparchus’ Star Catalogue and unveil a major missing link in the history of astronomy.

Easton said this is the latest example of multispectral imaging’s growing role in the field of historical preservation. He said that the Chester F. Carlson Center for Imaging Science now supports locations across the United States and Europe in their multispectral imaging efforts. He’s especially encouraged by RIT’s efforts to democratize the process by developing inexpensive imaging systems that can be leveraged by small museums, libraries, and collections.

“It’s incredible what you can do with this technology, and it’s relatively straightforward and simple,” said Easton. “We want people to easily collect data and use it themselves.”

For more information about the study, go to the Journal for the History of Astronomy website.