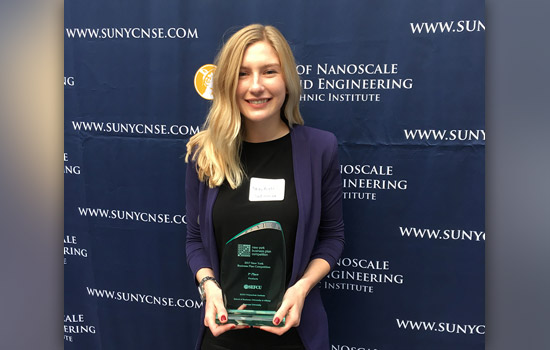 Kailey Bradt, a student in RIT’s Master of Science in product development program in the Kate Gleason College of Engineering, won first place and $10,000 at the New York State Business Plan Competition.

Kailey Bradt, a student in RIT’s Master of Science in product development program from Corning, N.Y., won first place and $10,000 in the “Products” category at the eighth annual New York Business Plan Competition, sponsored by SUNY Polytechnic Institute and the University at Albany. The competition was held in April at SUNY Poly’s Albany NanoTech Complex and featured 103 teams that were selected to compete after making it through regional semifinal rounds that were held across the state.

According to Bradt, her entry—OWA Haircare— is a waterless shampoo that saves water, plastic and energy. All ingredients have a safety rating of 1, the safest rating that can be achieved on the Environmental Working Group’s Skin Deep database. The ingredients are naturally derived, not sourced from animals, making the product completely vegan.

“Winning this competition really meant the world to me,” said Bradt, a graduate of RIT’s chemical engineering program. “I’ve been talking about starting a sustainable cosmetic company since I was 16. When I had the idea for this shampoo, I really felt like the time was now. I decided to leave my job in Los Angeles, return to RIT for graduate school, and create a business. I received a lot of positive feedback so I decided to take it a step further and apply to the New York Business Plan Competition. I can’t even begin to describe the moment they announced OWA Haircare as the products category winner, it seemed like a dream. This is validation that there is a business around my idea and only makes me more motivated to continue chasing my dream.”

In addition to Bradt’s win, seven other student teams from Rochester Institute of Technology presented in five categories.

“All of us at the Simone Center are very proud of the achievements of Kailey Bradt and all of the other students who have worked so hard to prepare for this competition,” said Dana Wolcott, lead innovation coach at RIT’s Albert J. Simone Center for Student Innovation and Entrepreneurship. “Competitions like these give our students opportunities to pitch their businesses to industry experts and other entrepreneurs, help them determine the viability of their innovative ideas and to see how their plans stack up against students from across New York state. Entrepreneurship is important to RIT students and we are happy to help them support them in every way.”

A panel of national venture capitalists, angel investors, and investment bankers selected the winning teams and offered invaluable feedback for each team that took part in the competition.

Since the competition’s inaugural event in 2010, more than 2,100 student teams from 75 New York state colleges and universities have competed, claiming more than $2,300,000 in cash and in-kind prizes. The competition enables each student-led team to explain their innovation in a set amount of time, with teams competing against others whose products, services, or developed ideas fall within a similar category, or track.

More information about the 2017 New York Business Plan Competition can be found at: http://www.nybplan.com.