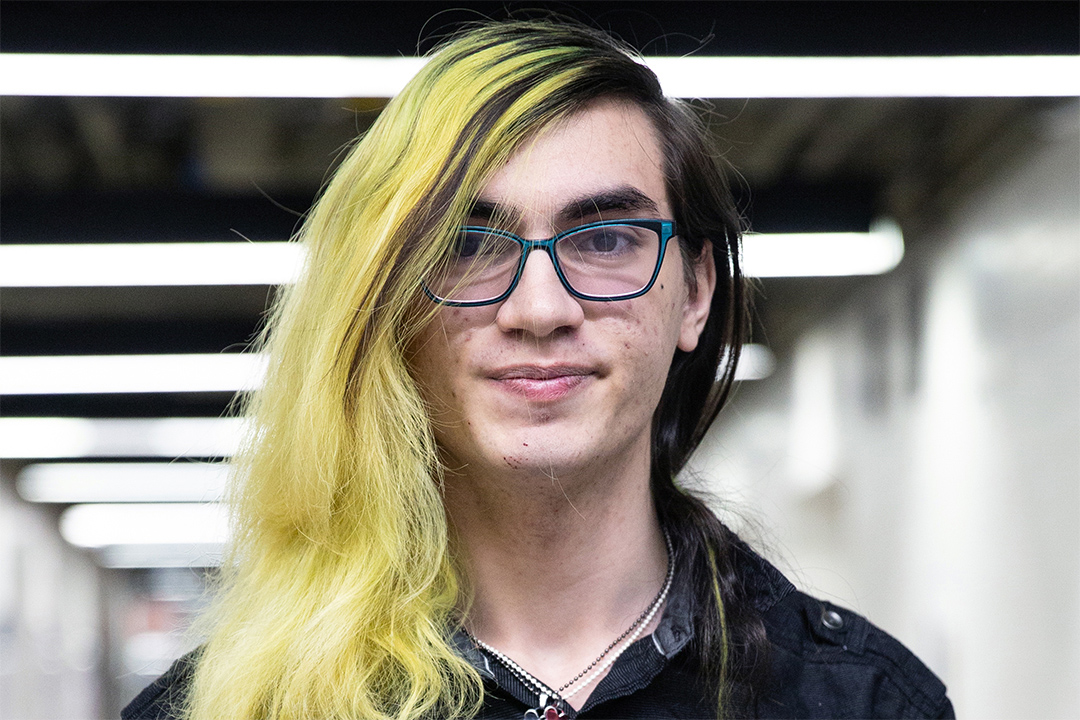 Quinn Kolt, a fourth-year applied mathematics student from Solon, Ohio, has been named a 2021 Goldwater Scholar.

Rochester Institute of Technology student Quinn Kolt has been awarded a Barry M. Goldwater Scholarship, the premier undergraduate research scholarship in the fields of math, natural sciences, and engineering in the United States.

The fourth-year applied mathematics and computer science double major from Solon, Ohio, was selected as one of 410 scholars from a pool of 1,256 nominees by the Barry Goldwater Scholarship and Excellence in Education Foundation, in partnership with the Department of Defense National Defense Education Programs. Since 2005, RIT has had 30 Goldwater Scholars and seven honorable mentions.

The road to becoming a successful student researcher was far from easy. Kolt (who uses they/them/their pronouns) said they suffered from mental health issues throughout high school, was diagnosed with idiopathic chronic pancreatitis shortly after their graduation, and had an unsuccessful surgery after their freshman year involving the removal of several organs that ultimately left Kolt diabetic. These obstacles derailed Kolt’s early attempts to engage in research, but they persisted.

“I didn’t want to give up on research,” said Kolt. “I knew this was what I wanted to do, and I was determined to find something that fit. I asked for advice on who I could work with and was connected with Dr. Akhtar Khan.”

Khan introduced Kolt to a wide variety of topics related to his work in theoretical and applied inverse problems and variational inequalities, and Kolt decided to work on stochastic inverse problems as it combined many of their favorite fields of math. Kolt said they struggled with the complex, abstract material at first, but eventually gained traction and was exhilarated by the theoretical and computational details.

“This research demonstrated that, despite my health issues, I could still be a productive researcher,” said Kolt. “This has been reaffirmed with my research with Dr. James Marengo, Dr. Olalekan Babaniyi, and Dr. David Farnsworth. With this scholarship, I know that my health issues won’t hold me back. Everyone has limitations, but we can succeed anyway.”

Kolt’s other accolades include being named the John Wiley Jones Outstanding Student in Science, an RIT Outstanding Undergraduate Scholar, a member of the RIT Honors Program, and receiving a School of Mathematical Sciences Outstanding Service Award.

Outside the classroom, Kolt has excelled in challenging national mathematics competitions, designed two virtual math competitions, and spent two years as a leader of Tangent, RIT’s transgender and nonbinary support group, helping build several events including Transgender Day of Visibility and Transgender Day of Remembrance. In addition, Kolt has tutored for the Higher Education Opportunity Program (HEOP) and the Collegiate Science and Technology Entry Program (CSTEP), both geared toward helping disadvantaged and underrepresented students.

Kolt’s long-term plans include obtaining a Ph.D. in mathematics, performing research in operator algebras and inverse problems, giving lectures, and providing academic support to students as a professor at the university level.