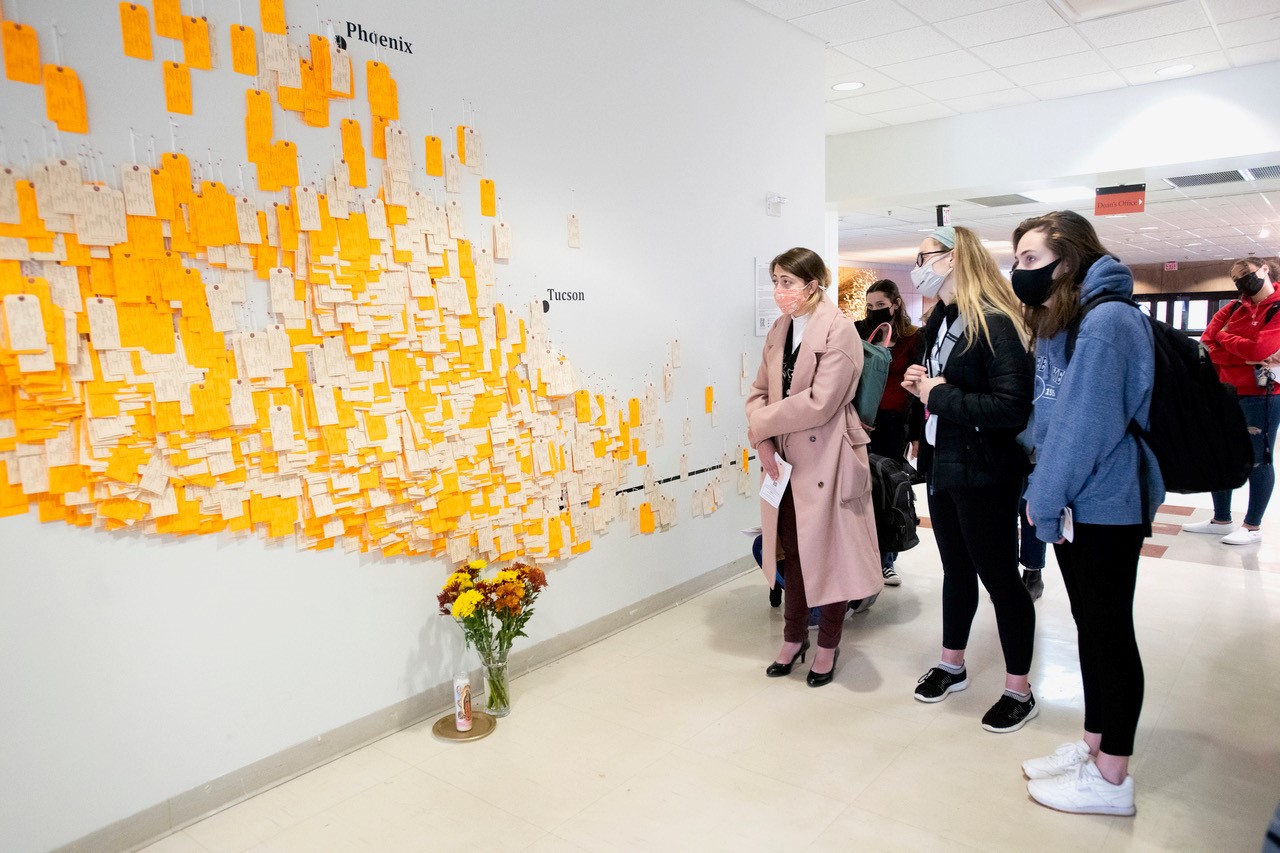 Students view Hostile Terrain 94 exhibition, which will be open at RIT through Jan. 11, 2022. The date is significant, as Jan. 11 is the National Day of Human Trafficking Awareness.

RIT volunteers are building an exhibition called Hostile Terrain 94, which will open to the public on campus later this fall. The RIT exhibition is part of a global pop-up exhibition that will take place in around 150 cities nationally and internationally in 2021-22 to highlight the crisis along the US-Mexico border. At the center of the exhibition is a wall map of the border and 3200 toe tags, each representing a person who died along the migrant route. Groups of volunteers fill out all 3200 toe tags with the personal information of the migrants, and then the toe tags will be pinned on the map in the exact location where remains were discovered.

The Hostile Terrain 94 exhibition gets its name from the Prevention through Deterrence set of border policies initiated in 1994. Heavier surveillance of the border was focused on urban points of entry, and consequently, migrants intending to cross the border without authorization would be funneled through the less-surveilled Sonoran Desert of Arizona. Border Patrol documents refer to this desert as “hostile terrain,” the idea being that people would not want to walk through the desert because of the risks to their lives. The 3200 toe tags of the exhibition represent people who took the risk, hoping to find a better life, but lost their lives in the process. The intention of the exhibition is to humanize the statistics and to initiate conversations about immigration policy.

The Hostile Terrain 94 exhibition at RIT campus is being organized by Anthropology Professor Christine Kray and Museum Studies Professor Juilee Decker. They have been assisted by volunteers of RIT students, staff, and faculty. Christine Kray, who conducted years of ethnographic research in Mexico, talked about the participatory nature of the project: “One thing I deeply appreciate about this project is that it is participatory. It only gets built if enough people decide to take time out of their day to write out and hang up the thousands of tags. During this pandemic, I’ve been grateful for the chance to be in groups of people working on a project together. The focus is not on ourselves and our personal worries, but the experiences of other people.”

One first-year RIT student who volunteered at a toe-tag-writing workshop talked about what the experience meant to her. The student, preferring to remain anonymous, said the exhibition hits close to home: “It’s sobering to be detailing each loss of life. Each toe tag is a unique person with their own story, and we can only imagine their reasons for attempting to create a new life for themselves. My dad was a refugee when he was little, and I can’t help but look at each kid and teen and think about the families they might have had and the lives they could have lived.”

Alex Bush, a first-year Physics major, who has now participated in two toe-tag workshops, reflected on their experience: “It’s a harrowing experience. It left me feeling very vulnerable and angry. On one page, I had a 14-year old, whose name is Roberto. And I had to take about 30 seconds to process it before moving on. He was only 14. He’s younger than I am.”

Kera Hampton, a second-year Psychology major, commented on the exhibition: “With us being so far away from the Mexican border, it is easy to disassociate from it. But it’s important to realize how we are playing a role without realizing it.”

The Hostile Terrain 94 exhibition will run at RIT between Oct. 27-Dec. 5 in Booth Hall Space (the hallway outside University Gallery, 2765 Booth Hall). It is free and open to the public. To sign up for one of the volunteer workshops and learn more about the exhibition and the details of the events, visit: http://tinyurl.com/HT94RIT.