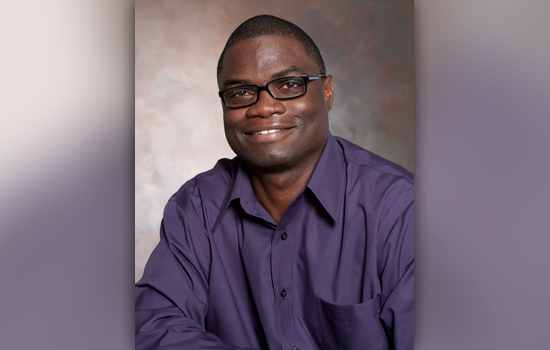 A Rochester Institute of Technology professor has received a federal award for research that could help in the critical battle to develop new drugs to combat the drastic rise in the number of antibiotic-resistant bacteria.

André O. Hudson, associate professor in RIT’s Thomas H. Gosnell School of Life Sciences, has been awarded a $436,989 Academic Research Enhancement Award from the National Institute of General Medical Sciences. The grant will be used to fund research at RIT into the efficacy of using the DapL enzyme as a target in the creation of new narrow-spectrum antibiotics to help combat the growing threat posed by antibiotic-resistant bacteria.

“I’m thrilled that we’re receiving this grant to continue our research to help combat the threat of antibiotic-resistant bacteria,” said Ryne Raffaelle, RIT vice president for research and associate provost. “Our study of the DapL enzyme could lead to breakthroughs in targeting pathogenic bacteria. This award will also support RIT as we work to build the workforce our community needs to help solve these critical issues related to antibiotic resistance.”

Raffaelle thanked Congresswoman Louise Slaughter for her efforts to raise awareness of the critical rise in antibiotic-resistant bacteria, her leadership in helping procure federal funding for research to combat the problem and her advocacy in bringing that funding to RIT and the Rochester region.

“The dangers posed by an antibiotic-resistant superbug aren’t some far off threat, as we saw earlier this year with the discovery of our nation’s first case of bacteria that could not be killed by any known drug. This is a global problem, and I’m proud that RIT is receiving this award so scientists in our community can lead the way in finding a global solution,” said Slaughter, the only microbiologist in Congress and the author of the Preservation of Antibiotics for Medical Treatment Act. “I wrote my master’s thesis on bacterial drug resistance long before other scientists starting taking this threat seriously, and I will continue sounding the alarm so we can save antibiotics for human beings.”

Hudson said he is excited about the prospect of this research, which he said is essential to the future of the world’s health.

“No new class of antibiotics has been developed in 30 years,” said Hudson, the principal investigator on the grant. “Had we had the notion of having antibiotics in the pipeline, we could have had them ready to use when resistance first became a problem.”

He said he’s particularly excited about this grant because it will be used to help train undergraduate and graduate students at RIT and engage them in ongoing research. And he thanked Sophia Maggelakis, dean of the College of Science, for her consistent support of his work.

“It’s important that we train and mentor students,” he said. “A lot of the world’s current issues are going to solved by this generation and the generations that follow, so this provides me with an opportunity to train and mentor, get them excited about using science to solve the issues that will be relevant in the future.”