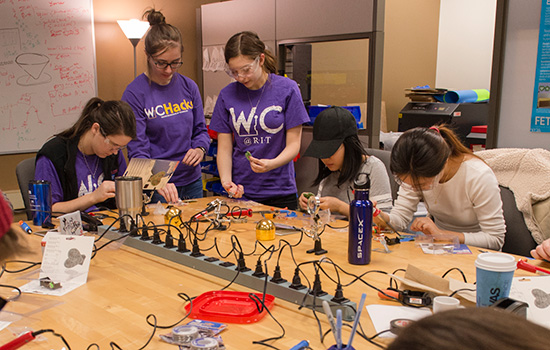 Growing up, Sarah Fomchenko had no clue what she wanted to do. She just knew that she liked playing with computers.

“My parents would joke that if I wasn’t on the computer all the time, I could be a straight-A student,” said Fomchenko, a second-year computer science major from Franklin Lakes, N.J. “I love the feeling of being able to create something, without needing to be artistic.”

It wasn’t until high school that Fomchenko realized a career in computer science was a possibility for her. After participating in a two-week learn-to-code program in Boston, she enrolled in her school’s first AP Computer Science course and eventually made her way to a program for women accepted into RIT’s B. Thomas Golisano College of Computing and Information Sciences. There, she got to meet other women who were interested in coding and see what RIT is all about.

“I would have never considered computer science as a major unless I had been a part of those special programs,” said Fomchenko. “We need to create more opportunities for young women to learn about computing way before high school—it’s wasted potential if they have already committed to another major.”

For all the progress women have made in STEM careers, the gender gap in computing is only growing larger. Since 1990, the percentage of female computing professionals has dropped from 35 percent to about 24 percent today. If that trend continues, the share of women in the nation’s computing workforce will decline to 22 percent by 2025, according to Girls Who Code, a national nonprofit organization dedicated to closing the gender gap in technology.

Still, computing is a growing industry. Employer demand for graduates with computing skills far outnumbers the supply. Colleges are seeing this trend and their search for ways to attract more women to a career in computing is underway.

Increasing female enrollment has been a priority at RIT. As part of the university’s strategic plan, RIT is striving to become the largest producer of female, underrepresented male and deaf or hard-of-hearing STEM graduates among all private colleges in the U.S. by 2025.

RIT’s Women in Computing (WiC) group was created in 2008 to help empower women in computer fields to succeed and thrive at RIT and beyond. As a result of all of these efforts, the computing college has increased its female enrollment from 12 percent in 2012 to 16 percent last fall. The national average hovers between 14 and 18 percent.

However, for the women involved it’s more than just numbers. Anne Haake, dean of the computing college, has made diversifying the college an area of focus.

Women in Computing is trying to build up the next generation of female coders by changing the culture of computing, creating more advancement opportunities and reaching out to young women.

“It is so important that we collectively, as a community, support women in tech and organizations like WiC,” said Aliza Carpio, technology evangelist at Intuit. “Although women in tech—whether at colleges or working in the industry—are still in the minority, we represent a vital component in building amazing solutions that enrich or enable all of our lives.”

In 1996, RIT became the first college in the U.S. to offer an undergraduate degree in software engineering. Of the 12 students in that first class, none were women.

As computers became a more integral part of daily life, the programming majors at RIT continued to grow in size, but not necessarily in diversity.

To combat this trend, Women in Computing was formed. The small group, led by Professor Sharon Mason, focused on supporting faculty and creating networking and outreach opportunities.

“However, WiC had limited resources at the time and I didn’t really see it grow or evolve,” Butler said.

In 2014, Andrew Sears, dean of the Golisano College at the time, saw the need for a full-time person that could focus on diversity in the college and support students. Lana Verschage, a longtime academic adviser in the Department of Software Engineering, was just the person to take this on.

“Not every woman in the Golisano College is going to take advantage of WiC, and that’s perfectly OK,” said Verschage, director of WiC. “We are here to provide opportunities for growth, to support each other and to benefit from one another’s varied experiences.”

Today, the Women in Computing group consists of more than 50 active members from majors across the computing college. Students regularly meet in the two-room office to hold meetings for the six WiC committee groups, host networking opportunities with employers and workshops for learning something new, work on homework and oftentimes just to socialize and relax.

“Sometimes I stop by WiC for a meeting and it always amazes me how much bigger and better it seems to get every year,” said Butler. “WiC gives a voice to women, provides support and a safe haven for those in programming fields at RIT and gives its members the opportunity to turn around and mentor young women who want to follow in the path we’ve cut out at RIT and in the industry.”

Every year, members of WiC attend the annual Grace Hopper Celebration of Women in Computing, the world’s largest gathering of female technologists. Not only does the event open a dialogue about women in technology, it also serves as a recruiting tool for companies.

At the 2016 event, more than a dozen students went on 48 interviews, resulting in more than 15 job and co-op offers from companies including IBM, ESPN, Northrop Grumman, EA Games and Apple.

Laura Weintraub, a second-year computing security student from Syosset, N.Y., interviewed with and received co-op offers from Allstate and Bank of America at the conference.

“I was sitting among the smartest and most innovative women in the computing field, and it was awesome,” she said. “I loved hearing about all of the exciting journeys these women went on to get to where they are, and what they project the future of computing to be like.”

For Kayla Davis, a fourth-year software engineering student from Middlebury, Vt., being in a room full of women at the Grace Hopper event was a bit of a shock. She’s used to being a minority in the classroom.

“The good thing is, in most cases, people in the computing world are going to judge you based on your skill and if you work well in a team, not on your gender,” said Davis, who already had a summer co-op lined up at Microsoft Health before the conference. “But in the future, I hope I’m not seen as a woman in computing—I want to be an engineer who just happens to be a woman.”

Unique to RIT is a group of men in computing who are working to make that future a reality.

The WiC Allies Committee meets every week to discuss ways of socially changing the atmosphere of computing from within, by fostering a more inclusive culture.

“To promote diversity and inclusion of women in the field, we need people of all genders to collaborate and be a part of the solution,” said Adam McCarthy, a fifth- year software engineering major from Ogdensburg, N.Y., and leader of the Allies Committee. “We give everybody an opportunity to help out and make a difference.”

While the allies search for ways to combat microaggressions and unconscious bias in the computing world, WiC is also bringing in leaders from the industry who can share their tips and tricks for working in the field.

“This isn’t about the divide between men and women, this is about how we can support each other, so that each of us finds a place in making this world better for each and every one of us,” said Carpio, who has given several talks on her experiences at Intuit. “When we strive to create a community that supports underrepresented groups like women in tech, we all win.”

Butler is already noticing a difference. When she worked as an IT consultant with Ethany Corp. in Scottsville, N.Y., three of the eight programmers in her office were female.

“If everyone comes from the same experiences, the same mindset and the same culture, you only get the same stale ideas,” Butler said. “That’s why it’s important for women to play a more equal role in the programming fields—we bring new thoughts, ideas and questions to the table that men may not have ever thought of.”

The WiC Outreach Committee is constantly thinking of new ways to get girls interested in computing.

At a recent outreach planning meeting, Tia Bendlin, a second-year computer science major from Otisville, N.Y., wondered if soldering was the answer. “You get to melt metal!” she said.

Teaching young women how to solder their own smart bracelets with programmable LED displays is just one of the many activities the committee has put together. The group also hosts Girl Scouts workshops, a STEM Fair along with other diversity groups on campus and the After Hours program Fomchenko attended.

The annual After Hours program allows women accepted into the computing college to meet like-minded girls and experience life as an RIT student.

Through build-it challenges and scavenger hunts, the young women work in groups and start to form a network of friends.

“The overnight program is what really sealed the deal for me,” said Fomchenko, who helps to lead the Outreach Committee. “I’m still really good friends with the girls I met when I first attended—we have each other’s back.”

The Women in Computing group also works to spark an interest in computing at an even younger age, by working with middle school students at local libraries.

“Ultimately, it’s a pipeline problem,” said Verschage. “There needs to be more opportunities for girls to get exposure to computing.”

One of WiC’s largest outreach efforts has been the group’s all-female WiCHacks event, hosted on campus every winter and now sponsored by 10 companies.

For the two-day hackathon, student teams work to create mobile apps, websites, games and other software that provide unique solutions to problems. In four years, the event, open to college and high school women of all skill levels, has grown from 65 participants to more than 300.

“We’ve found that it’s important to work along with our faculty, current students and special interest groups to make sure that prospective students see others like themselves in STEM fields,” Shelley said.

For the first time, RIT will host the 2017 Association of Computing Machinery (ACM) New York Celebration of Women in Computing on April 21-22.

The RIT Office of Career Services and Cooperative Education in conjunction with Intuit is sponsoring a keynote address by Reshma Saujani, founder and CEO of Girls Who Code, to be held on the RIT campus.

She will discuss her work in closing the gender gap in technology and preparing young women for jobs in the future. The event is for girls and women of all ages. To register for the conference, go to https://www.conftool.net/nycwic2017. 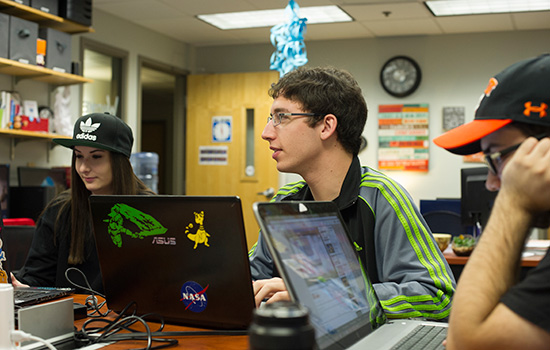 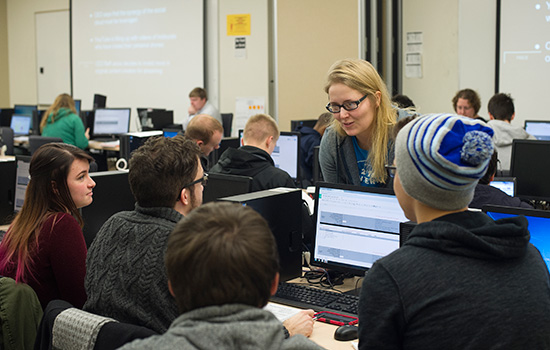 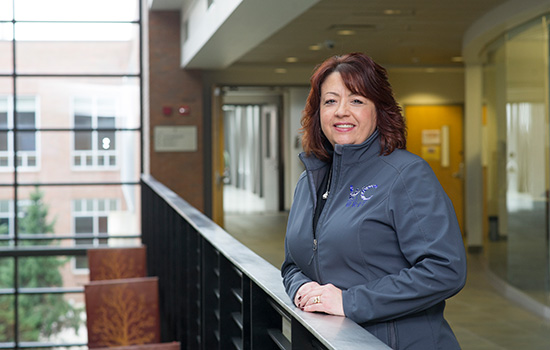 Lana Verschage, director of RIT’s Women in Computing group, is working to break down gender barriers in the computing field and promote an inclusive environment. A. Sue Weisler 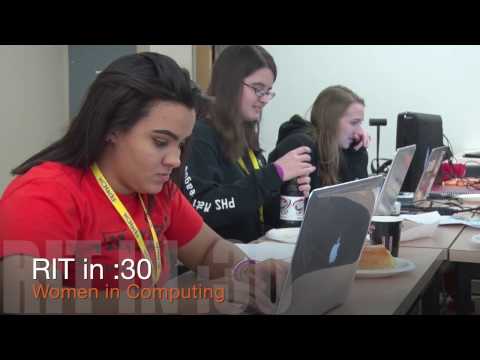