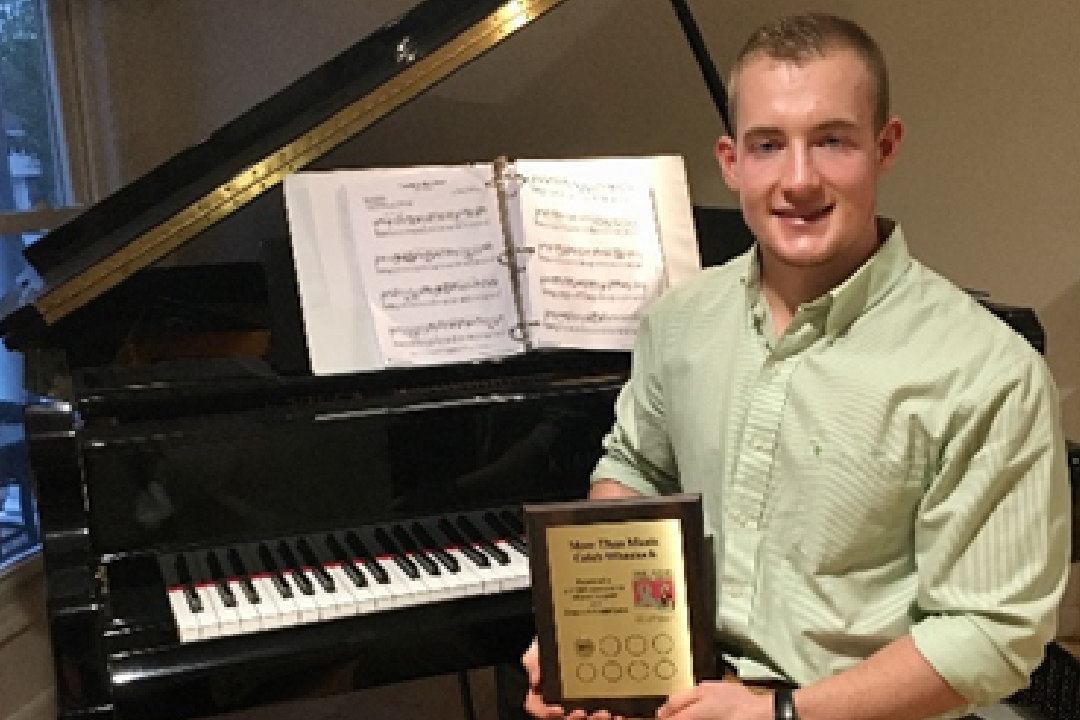 Caleb Wheelock presents his official contributor plaque from The Ride for Missing Children.

How far can ten dollars get you? Saunders Distinguished Professor of Urban Entrepreneurship Dr. dt ogilvie asked her students to push a small amount of cash to its limits with her $10 Business Project, an experiential learning simulation that allows students to learn and grow from starting their own business.

“I want students to just jump in,” explained Dr. ogilvie. “Often, students are afraid to start a business. I want them to see what they are capable of even not knowing the science of entrepreneurship. There’s something about ‘just do it.’ I’ve had students make over $1,000 during the semester with their $10 business.”

Caleb Wheelock, one of the $10 Business project success stories, was able to develop a nonprofit off of nothing but a little musical talent, some careful planning, and an idea.

“Caleb’s business was a social venture. His goal was to raise money to support his charity, often a more difficult challenge. I’ve had other students do a social venture but none as successfully as Caleb,” said Dr. ogilvie.

Before he started college, Caleb spent much of his time contributing to volunteer efforts. However, he found that the average person, especially the average college student, is often prevented from participating in charitable events by a busy schedule. He saw the $10 Business Project as a chance to give back again, and decided to direct his attentions towards The Ride for Missing Children.

“I chose (The Ride for Missing Children) specifically because my father and I had done the ride for 4 years in a row. My father has continued to do the ride each year, but I have not been able to due to being away on co-op's each summer. Therefore, I thought it would be most fitting to perform for the Ride for Missing Children. Now, instead of RIT requirements being the reason I stopped helping this cause, I thought this was the perfect way to have RIT be the reason I started giving back once again,” Caleb explained.

The project required Caleb to make a business model, advertise his venture, and dust off his piano skills. Although hand injuries and a busy schedule had kept him from playing for six years, Caleb went to work on creating a 21-song playlist for two concerts that would benefit The Ride for Missing Children. He called his non-profit “More Than Music.” Along with the help of generous contributors, who provided food and beverage, More Than Music was able to raise enough for a $1,711.00 donation.

Caleb’s business was successful enough to earn him an official Contributor plaque and 2019 pin from The Ride for Missing Children.

“I would highly recommend (Dr. olgvilie’s class, Entrepreneurship and New Venture) to anyone even considering becoming an entrepreneur or who is just interested in what it takes to become an entrepreneur,” said Caleb.

As for More Than Music, there is more to come, Caleb said:

“I fully intend to host another two concerts this spring in support of the Ride for Missing Children. I will be featuring a brand-new playlist which incorporates a much wider and more recognized selection of songs, and I hope to raise even more money for this great cause. I am currently prototyping new music for the concerts on Sunday afternoons at the piano in the Fireside Lounge.”