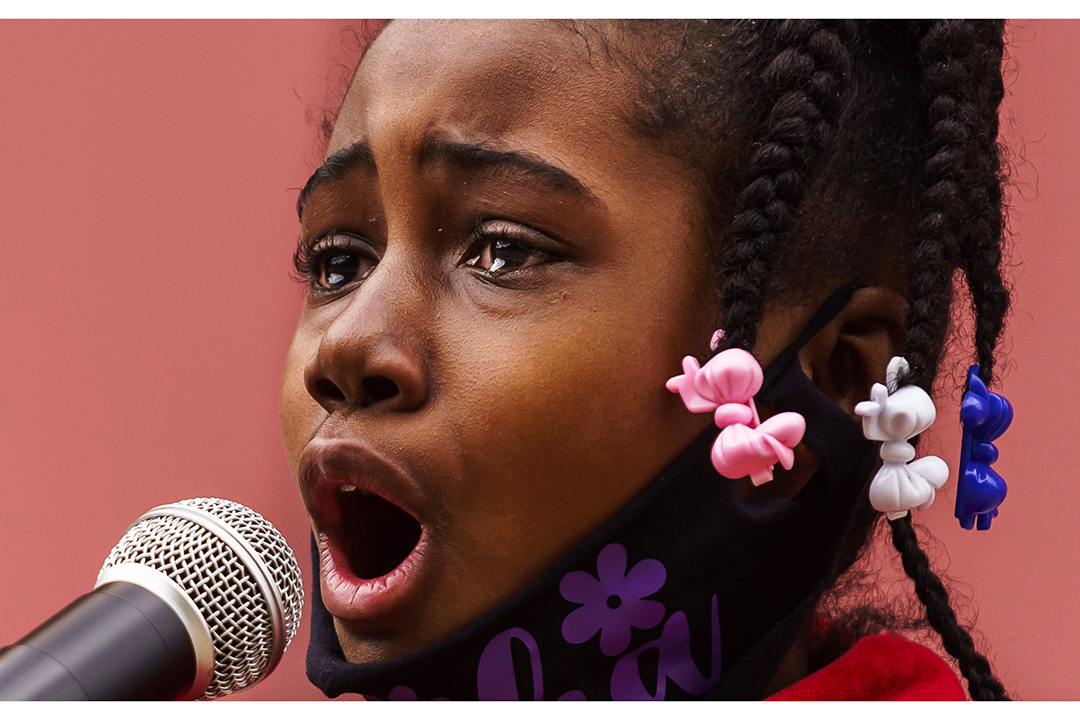 Kaliah Harden, 11, pleads that no more black lives are lost to police brutality during a rally on June 13 in Rochester, Minn. "When I speak, I speak for all the children around the world. We want to live," Kaliah said. "We're good people." Traci Westcott/Rochester Post Bulletin

As protests against racial injustice occur across the U.S., RIT Photojournalism alumni and faculty are documenting the demonstrations calling for police reform and racial equality.

Alumni and faculty have photographed protests in Charleston, S.C., Minneapolis, Minn., New York City, Rochester, Minn. and Washington, D.C., among other cities. They have done so on assignment for news organizations such as the Associated Press, the Rochester Post-Bulletin, the Post and Courier, The New York Times, Reuters, the St. Louis Post-Dispatch and TV and radio stations.

The events are in response to the killing of George Floyd, who died while under arrest on May 25 in Minneapolis, Minn. Four police officers have been charged in connection with his death.

Below are scenes from some of the demonstrations, through the lenses of alumni and faculty of RIT’s School of Photographic Arts and Sciences, as well as a personal perspective from Traci Westcott ’18, Digital Content Producer with the Rochester Post-Bulletin who has been in the field covering the events.

Alumni and faculty covering the protests include:

"As journalists, we are taught to be objective, to 'check our biases at the door.' Well, I refuse to believe that being passionate about human rights is considered biased. I’m sad. I’m sad that in 2020, our country is still fighting for basic human rights. I’m sad that we as photojournalists haven’t fully embraced diversity. We haven’t always listened.

"It’s unfortunate that so many people have waited for this national uprising to really assess racism in every aspect of American culture, but I’m happy this conversation seems to have a fire underneath it. Coming into this industry I was motivated to continue addressing  these issues, whether through the stories I tell, or advocating for more diversity in the newsroom. I’m not perfect, and I never will be, but these past few weeks, I’ve had plenty of thoughtful conversations with co-workers, family and friends. I’ve dug deeper into my own upbringing and privilege, and I’ve questioned myself more than I ever have. And every time I’ve questioned myself, I’ve grown.

"When I arrived at George Floyd’s memorial service in Minneapolis, I was blown away by the amount of press present. I was on assignment for Forum Communications Company, who owns The Rochester Post Bulletin where I work. There was a news station from Australia to my right, a Colombian station behind me — The Associated Press, The Star Tribune, Reuters, MPR — you name it, they were there. Part of me hated that. Instead of being able to mourn privately, the family was met with hundreds of shutter clicks and journalists lining the streets. I didn’t want to just swoop in, make photos and leave. I never want to be that photojournalist. It was nearly 90 degrees, but my arms were covered in goosebumps. I talked to almost every person I photographed that day. And I listened.

"Three weeks after the death of George Floyd in Minneapolis, rallies continued in Rochester, Minn. A crowd of hundreds watched as 11-year-old Kaliah Harden took the stage and pleaded for her life. She was the last to speak. When she took the mic, her eyes welling up, she said: 'When I speak, I speak for all the children around the world. We want to live.' 'We want to live.' I wanted everybody to hear those words."