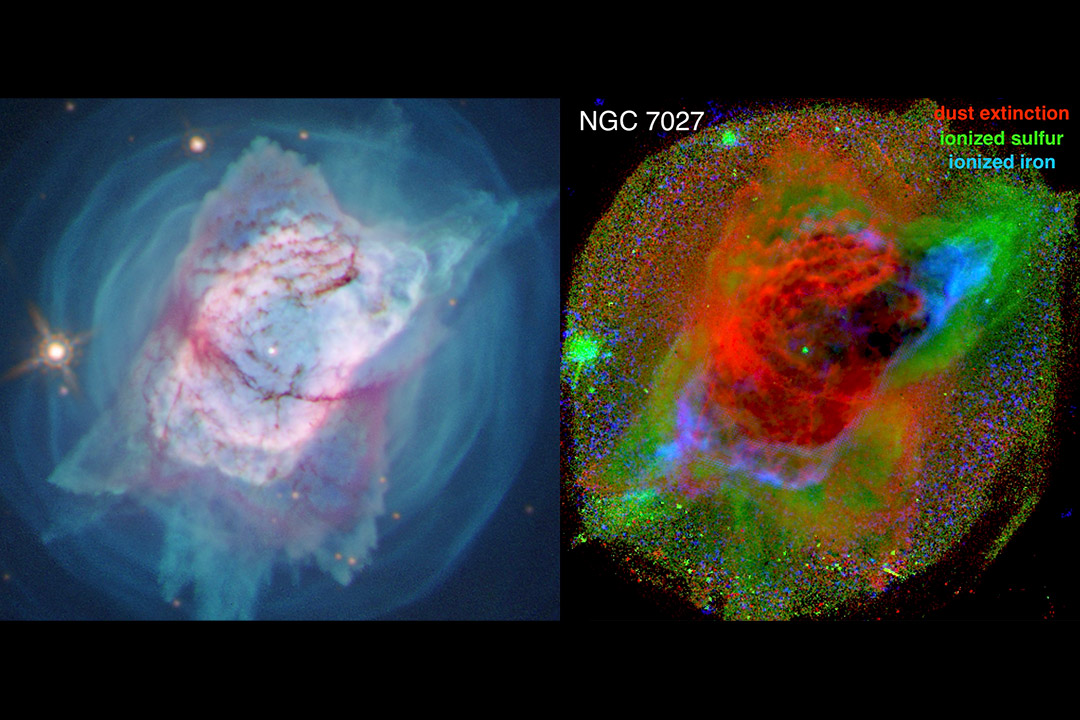 Images of two iconic planetary nebulae taken by the Hubble Space Telescope are revealing new information about how they develop their dramatic features. Researchers from Rochester Institute of Technology and Green Bank Observatory presented new findings about the Butterfly Nebula (NGC 6302) and the Jewel Bug Nebula (NGC 7027) at the 237th meeting of the American Astronomical Society on Friday, Jan. 15.

Hubble’s Wide Field Camera 3 observed the nebulae in 2019 and early 2020 using its full, panchromatic capabilities, and the astronomers involved in the project have been using emission line images from near-ultraviolet to near-infrared light to learn more about their properties. The studies were first-of-their-kind panchromatic imaging surveys designed to understand the formation process and test models of binary-star-driven planetary nebula shaping.

“We’re dissecting them,” said Joel Kastner, a professor in RIT’s Chester F. Carlson Center for Imaging Science and School of Physics and Astronomy. “We’re able to see the effect of the dying central star in how it’s shedding and shredding its ejected material. We’re now seeing where material that the central star has tossed away is being dominated by ionized gas, where it’s dominated by cooler dust, and even how the hot gas is being ionized, whether by the star’s UV or by collisions caused by its present, fast winds.” 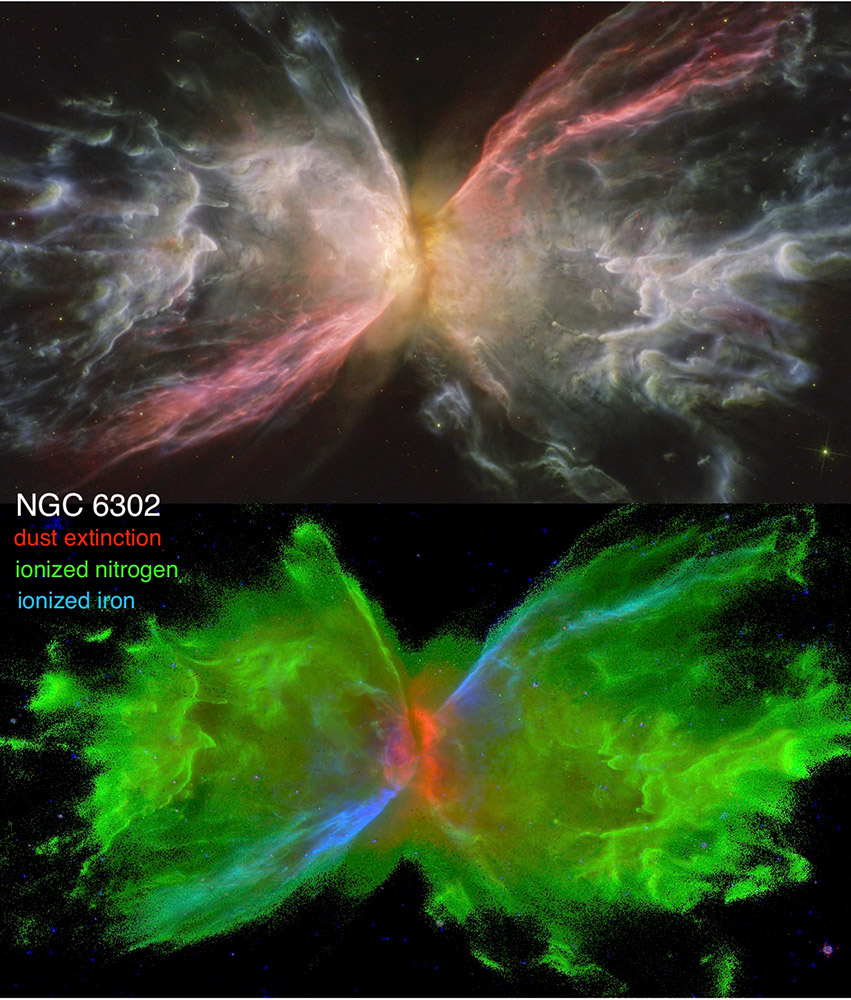 On top is an image of the Butterfly Nebula (NGC 6302) captured by the Hubble Space Telescope in 2019 and released in 2020. Further analysis by researchers produced the RGB image on the bottom, which shows extinction due to dust, as inferred from the relative strength of two hydrogen emission lines, as red; emission from nitrogen, relative to hydrogen, as green; and emission from iron as blue.

Kastner said analysis of the new HST images of the Butterfly Nebula is confirming that the nebula was ejected only about 2,000 years ago—an eyeblink by the standards of astronomy – and established that the S-shaped iron emission that helps give it the “wings” of gas is even younger. Surprisingly, they found that while astronomers previously believed they had located the nebula’s central star, that previously-identified star is actually not associated with the nebula and is instead much closer to Earth than the Butterfly Nebula. Kastner said he hopes that future studies with the James Webb Space Telescope could help locate the real dying star at the heart of the nebula.

The team’s ongoing analysis of the Jewel Bug Nebula is built on a 25-year baseline of measurements dating back to early Hubble imaging. Paula Moraga Baez, an astrophysical sciences and technology Ph.D. student from DeKalb, Ill., called the nebula “remarkable for its unusual juxtaposition of circularly symmetric, axisymmetric, and point-symmetric (bipolar) structures.” Moraga noted, “The nebula also retains large masses of molecular gas and dust despite harboring a hot central star and displaying high excitation states.”

Jesse Bublitz ’20 Ph.D. (astrophysical sciences and technology), now a postdoctoral researcher at Green Bank Observatory, has extended the team’s analysis of NGC 7027 with radio images from the Northern Extended Millimeter Array (NOEMA) Telescope, from which he has identified molecular tracers of how impinging ultraviolet and X-ray light continues to alter the chemistry of the nebula. The combined observations from telescopes at other wavelengths, like Hubble, and bright molecules CO+ and HCO+ from NOEMA indicate how different regions of NGC 7027 are affected by the high-energy radiation from its central star.

“We’re very excited about these findings,” said Bublitz. “We had hoped to find structure that clearly showed CO+ and HCO+ spatially coincident or entirely in distinctive regions, which we did. This is the first map of NGC 7027, or any planetary nebula, in the molecule CO+, and only the second CO+ map of any astronomical source.”

In addition to Kastner, Moraga, and Bublitz, the research team involved in the HST imaging work includes Rodolfo Montez Jr. ’10 Ph.D. (astrophysical sciences and technology) from Harvard-Smithsonian CfA; Bruce Balick from University of Washington; as well as Adam Frank and Eric Blackman from University of Rochester. Bublitz’s international team of collaborators on radio molecular line imaging of NGC 7027 includes Kastner, Montez Jr., and astrophysicists from Spain, France, and Brazil.

The RGB image on the right reveals the spatial separation of molecules CO+ (red) and HCO+ (blue), indicative of UV and X-ray processes, respectively. The much deeper optical image of [O III] (green) provides a juxtaposition of the ionized atomic structure and that of radio molecular observations.