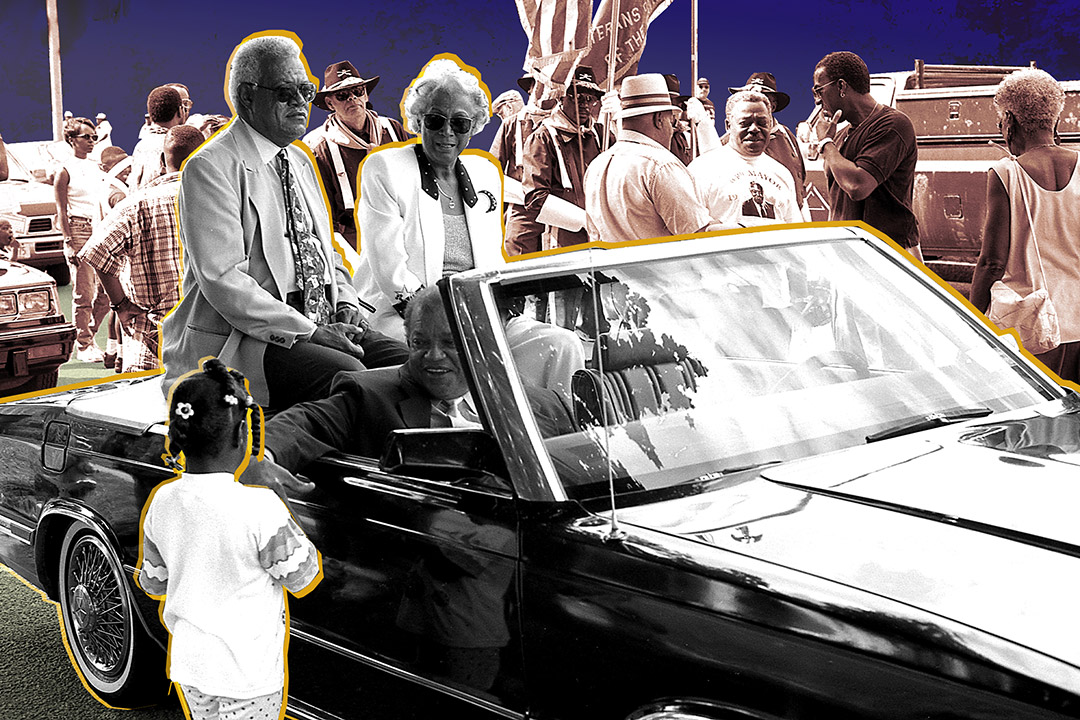 This image shows a modified photograph of historic Clarissa Street. The original photograph will be on display at the ‘Clarissa Uprooted” exhibit, which will be open in City Art Space from June 3 through July 24.

Starting on June 3, the exhibit “Clarissa Uprooted: Unearthing Stories of Our Village (1940s-early 1970s)” will open in the RIT City Art Space. This show, created through a partnership between the Center for Teen Empowerment in Rochester and the Clarissa Street Reunion Committee, has involved a number of collaborators including RIT faculty and students from the College of Art and Design and the College of Liberal Arts. The show will be on view through July 24.

“Clarissa Uprooted” examines the history of the Clarissa Street community in Rochester as an example of the Black experience through the middle of the 20th century. According to the exhibit website, it will focus on “African American resilience, agency, and progress,” as well as racial segregation, displacement, and the ongoing harms of urban renewal. 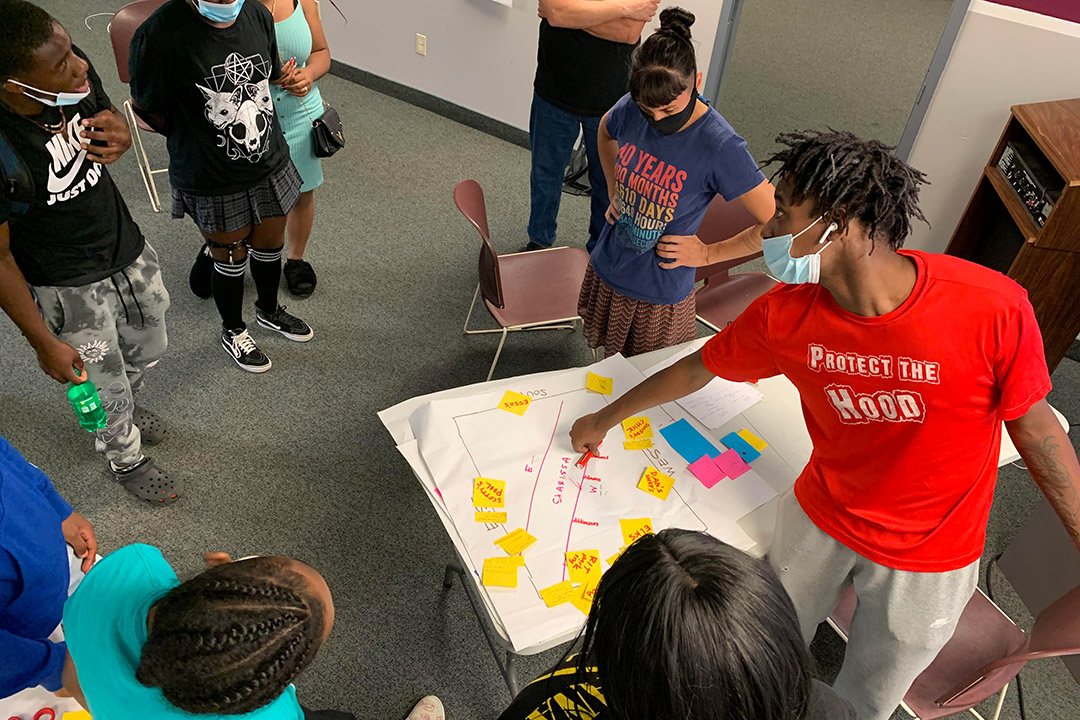 Collaborators with Teen Empowerment map out the virtual reality piece of the ‘Clarissa Uprooted’ exhibit.

The exhibit will also feature a partial reconstruction of the stage of the Pythodd Club, a jazz club that was a cultural center of the thriving community. At its height, the Pythodd Club represented some of the most joyous moments of the Clarissa Street community. But its legacy also represents the harms of urban renewal. “The building was demolished and the site is now a parking lot,” said writer Alan Morrell in a 2015 Democrat & Chronicle article.

The club also represents the deep connections between RIT and the greater Rochester community; the same article mentions that RIT students had frequented the club.

“Part of our mission at City Art Space with it being off campus and being located right in the center of downtown is to be involved with community collaboration,” said John Aäsp, gallery director for RIT’s College of Art and Design. “RIT’s campus used to be in downtown Rochester near the historic Clarissa Street neighborhood, and so I think it’s important for RIT to be a part of this project because we were part of that history.”

Oral histories, mainly from interviews of elders from the Clarissa Street community by Rochester youth, are also a centerpiece of “Clarissa Uprooted.” These elders’ memories capture both the joy of living in such a thriving community and the pain of losing that community. Many of these interviews come from Clarissa Uprooted: Youth and Elders Uncover the Story of Black Rochester, the documentary film created in 2020 by the Center for Teen Empowerment, Clarissa Street Reunion Committee, and Rochester Community Television. The film shares many themes with the exhibit, inside which it will be running continuously. 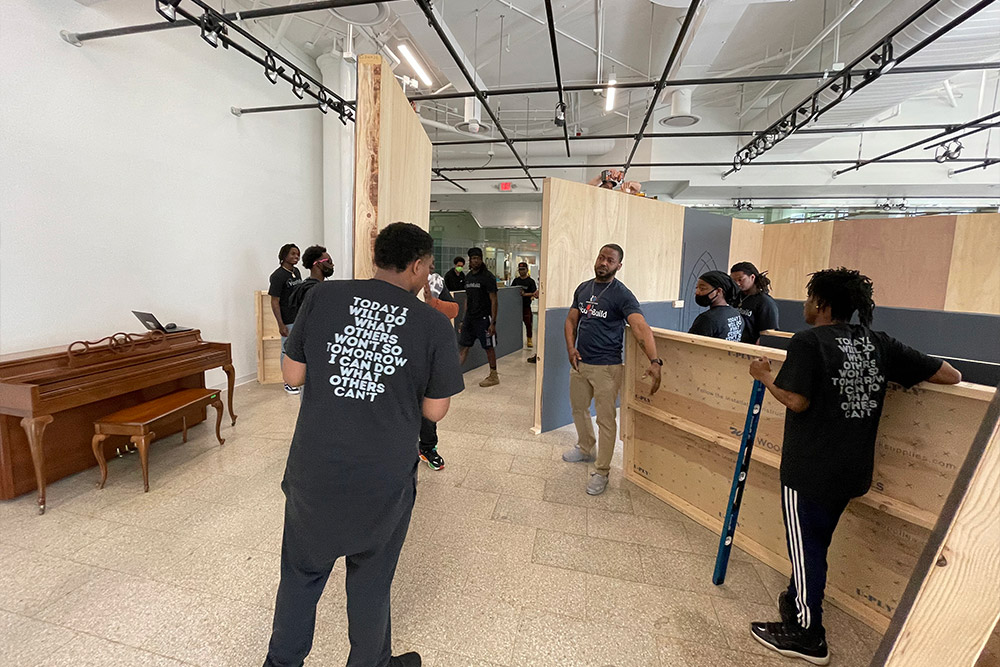 Members of the ‘Clarissa Uprooted’ team begin installation of the exhibit.

Joan Coles Howard, one of the elders from the Clarissa Street community featured in the film, explains her commitment to the exhibit’s mission. “I've said several times through this project that those who had ‘skin in the game’ need to be involved and speak out. We need to help the teens gain knowledge by talking with those of us who lived there at that time. That way they will get the truth. The African proverb, ‘Until the lion tells his story, the tale of the hunt will always glorify the hunter,’ says it best.”

Students and faculty from RIT have had a variety of opportunities to help create the “Clarissa Uprooted” exhibit. It became part of museum studies and history courses over the past year during which faculty guided students to help with research and label writing. This gives students practical experience with exhibition development and engages them with the community.

“To me, as I have explored in much of my own work as a curator, exhibitions can be forms of activism and advocacy,” said Juilee Decker, professor in the Department of History. “In this show, we see stories that are worthy of telling, and we also have the opportunity to share and learn together from others who come to the space.”

These faculty members and students have also been able to continue work on “Clarissa Uprooted” outside of classes. Similarly, students and faculty from the College of Art and Design have also assisted in the creation of the show, such as the virtual reality experience and the coordination with City Art Space.

“This exhibit will give former residents an opportunity to relive that time and share it with their descendants,” said Coles Howard. “And hopefully it will spark the will to return to a time more peaceful and loving and will encourage everyone of all races and nationalities to do so as they discover the truths about what was lost with the destruction of the Clarissa Street neighborhood.”