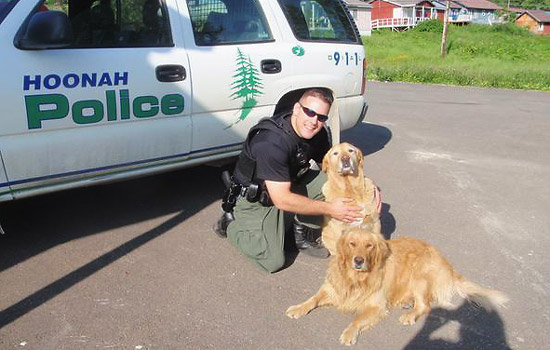 Police Officer Anthony Wallace ’03 on the job in Hoonah, Alaska.

Anthony Wallace ’03 (business administration) has reached another milestone in a growing list of achievements.

“I finally accomplished my dream and finished the police academy,” says Wallace, one of the few deaf police officers in the country. “I graduated as the valedictorian in a class of 22 recruits, which I am really proud of because it was a battle between me and two very good friends of mine. I had a goal to finish top of my class and hard work and discipline paid off for me.”

Wallace, whose father, grandfather and uncle were also police officers, started his career as an RIT Public Safety officer in 2003. He joined the Hoonah (Alaska) Police Department in 2006 but after seven months, he resigned for personal reasons and returned to RIT Public Safety. He went back to Hoonah, an island about 50 miles southwest of Juneau, in March 2008 and completed the 14-week Police Academy program at the University of Alaska Fairbanks earlier this year.

“My primary duty with the Hoonah Police Department is to enforce local, state and federal laws,” Wallace says. Because the city is small – population 880 – police officers wear many hats and Wallace assists the Hoonah Ambulance Corps as a certified EMT and will be going into training to became a certified fire fighter.

“I absolutely love Alaska and I love working for the City of Hoonah as a police officer,” Wallace says. “It has been a dream come true. I have so much to do and so many opportunities waiting for me. Also, being that I am a huge hunter and fisherman, I have a lot of hunting and fishing left to do!”

An All-American wrestler during his student days, Wallace was inducted into the RIT Athletic Hall of Fame in 2008. Wallace says his RIT education and experience at RIT Public Safety have contributed greatly to his success.

He hasn’t experienced difficulties on the job related to being hard-of-hearing, he says, and doesn’t foresee any.

“I have had tremendous support from my fellow police officers and have gained their confidence by proving every day that a person with my hearing deficiency poses no problems on the job. I have always believed that I could do the job of a police officer and here I am.

“I hope that people who are in the same situation as I am see my story and begin to believe that if you put your mind to something, you can achieve it! Anything and everything is possible, it’s just a matter of how bad you want it and how far you are willing to go to prove to people that you are worthy of whatever career you want to pursue!”