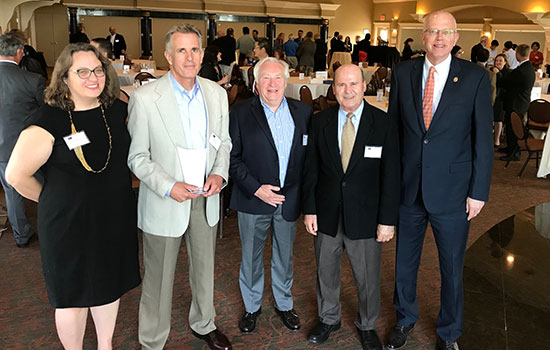 Ground-breaking work in nanolithography, first implemented more than 15 years ago by Bruce Smith, remain an industry standard in how semiconductor devices are manufactured today.

For his innovative work impacting advanced microelectronics, Smith, a professor and director of the microsystems engineering doctoral program at Rochester Institute of Technology, was honored as the 2018 Inventor of the Year by the Rochester Intellectual Property Law Association at a ceremony on June 12.

To date, Smith has more than 30 U.S. and international patents, and the foundational technologies he’s developed are the essential building blocks for electronic devices today. As microelectronic devices have progressed toward ever-shrinking dimensions, advances in patterning technology at the nanometer level have been required, he explained. Through innovation in new imaging methods and processes, Smith and his students have been instrumental in the advances in integrated circuit lithography. His many patents in optics, masking and materials have been licensed worldwide.

As one of RIT’s most distinguished alumni, Smith continues advances in semiconductor nanolithography using methods he and his team introduced pushing the resolution limits that are integral to today’s integrated circuits industry. He has advanced semiconductor patterning technology, and his contributions in nanolithography have been detailed in more than 150 publications, textbooks and several book chapters.

“Bruce Smith is an innovator whose work makes a difference,” said Doreen Edwards, dean of RIT’s Kate Gleason College of Engineering. “We’ve seen his creativity and drive impact an industry and also influence the many students he has taught. He has been a role model for how you build important technologies that improve people’s lives.”

Smith takes an interdisciplinary approach to research and education which has also led to unique opportunities for students. He has developed courses in microelectronic patterning, materials and processing that have been used as the basis for classes at universities worldwide. Smith has also pioneered unique engineering research experiences for both graduate and undergraduate students. Through support from industrial partners and IMEC (Interuniversity Microelectronics Centre) he created the RIT/IMEC/Mentor Graphics Graduate Research Experience for extended student assignments with researchers at the IMEC consortium in Belgium. The program has supported Ph.D. students from RIT and elsewhere for more than 15 years, as Smith has held various visiting professor positions in the U.S., United Kingdom and Europe.

At RIT, Smith is part of the Future Photon Initiative, one of the university’s signature research areas. He is also a Fellow of several prominent professional organizations including the Institute of Electrical and Electronics Engineers, (IEEE, 2015), the Optical Society of America (OSA, 2013), and of the Society of Photo-Optical Instrumentation Engineers (SPIE, 2007). Last year, Smith received the Excellence in Leadership Award from the American Vacuum Society for his contributions to the field of microelectronics and influence on the careers of student-graduates in the fields of engineering and science. The award is given annually to individuals who have made an impact in science and engineering, but also through mentoring, enhancing the careers of future generations who might not otherwise have considered or had access to opportunities in these fields.