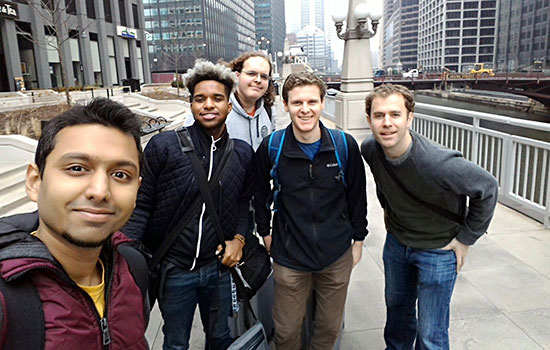 Five RIT game design and development students are on track for the annual Train Jam, a 52-hour video game building event held on an Amtrak train from Chicago to California.

The graduate students are joining more than 300 game developers Feb. 23–25 as they form teams, conceptualize their ideas and create games. The train’s final stop is San Francisco, for the Game Developers Conference (GDC) held Feb. 27–March 3.

Train Jam not only serves as a mode of transportation to GDC, it will allow the students to make connections with a diverse group of gaming professionals from around the world. Games created on the train will also be showcased on the GDC expo floor throughout the week.

“This is a once in a lifetime opportunity for us,” said Reuben Brenner-Adams, a fifth-year game design and development BS/MS student. “It means a lot to work so closely with these industry professionals, especially because I’m graduating soon and working to get a job in the industry.”

Organizers of Train Jam encourage participants to create teams of three to six people, often with people they don’t know. Most teams will designate someone to focus on art, someone to create sound and programmers to work on game play mechanics, among other key roles.

Developers will create a game that relates to a broad theme, such as waves or rituals. This year’s theme is "Unexpected Anticipation."

Brenner-Adams says that many teams will begin by conceptualizing and creating design documentation. Because the train does not have Wi-Fi, many developers will have pre-downloaded any documentation and tools they might need. Teams might also create a paper prototype and then a rough concept of the game using programmer art, with basic shapes and colors.

“If you can make a game that’s fun on paper, it will also be cool with all the visuals and digital animation,” said Brenner-Adams. “Then there’s a real big push to get all of the programing done before we get to GDC, so we have a finished prototype that people can actually play.”

“The tickets for Train Jam generally sell out within a few minutes of the event going live,” said Jessica Bayliss, associate professor and associate director of IGM. “The students are able to do so much close networking with these professional game developers and it’s important to give students that experience.”

“I’m excited—I’ve never been on a cross-country train before,” said Flynn. “I have been talking with other Train Jammers on Slack for weeks and I already feel like I’m learning something.”