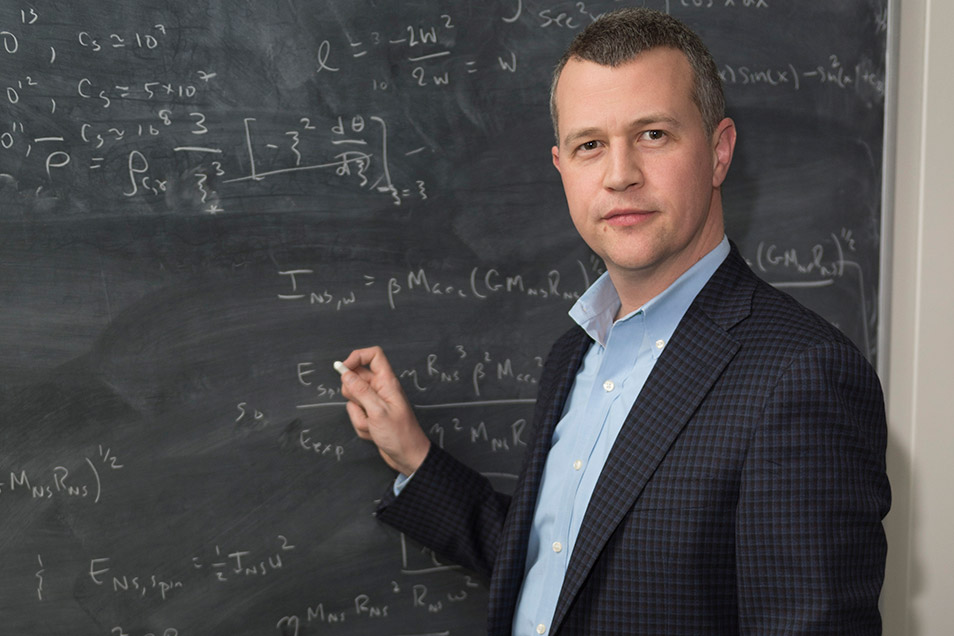 A new grant will help researchers at Rochester Institute of Technology’s National Technical Institute for the Deaf learn more about “one of the most challenging phases in stellar astrophysics,” according to the National Science Foundation.

The nearly $300,000 project, which incorporates research opportunities for deaf and hard-of-hearing undergraduate students, will revolutionize how scientists understand a crucial phase of binary star evolution that rapidly shrinks the orbit of two stars to 0.1 percent of the distance from the Earth to the sun in only one year. This is the main method for forming tight binaries in the universe, such as binary black holes, neutron stars, white dwarfs, and many other classes of objects. But scientists have never seen it happen.

Jason Nordhaus, an RIT/NTID assistant professor of physics and the principal investigator on the grant, is “beyond excited” to lead the first-of-its-kind survey that will allow astrophysicists to create the first observational constraints on the outcomes of what is called the common envelope phase.

Through the project, titled “Brief But Spectacular: New Windows into the Physics of Common Envelope Evolution,” Nordhaus and his team will be conducting an observational survey of all galactic star clusters within 1 kiloparsec of Earth to hunt for close binary systems. To do that, they will use data from NASA and the European Space Agency’s flagship space missions, TESS and Gaia, in addition to some of the largest telescopes on the planet—the Lowell Discovery Telescope in the northern hemisphere and the Magellan Telescopes in the southern hemisphere.

“The common envelope phase is responsible for making the systems that will later merge and create gravitational waves,” explains Nordhaus. “Because only one star in our galaxy is experiencing this phase at any time, we have never directly seen it. However, close binaries in clusters act as a Rosetta stone, allowing us to map the conditions right before the common envelope phase to the conditions right after the phase is over.”

As part of this three-year project, several deaf and hard-of-hearing RIT/NTID undergraduates will help conduct research at Boston University each summer. Philip Muirhead, co-PI on the project, is the director of graduate admissions for Boston University’s astronomy department. Nordhaus and Muirhead will work together on best practices for supporting those students successfully in the summer. Also contributing to the project are Maria Drout, assistant professor of astronomy and astrophysics at the University of Toronto, and Jeffrey Cummings, associate research scientist at Johns Hopkins University.

“This new venture that Dr. Nordhaus is taking on will lead to discoveries beyond our imagination,” said Gerry Buckley, NTID president and RIT vice president and dean. “This work also provides a tremendous opportunity for our young deaf and hard-of-hearing science students to work in a research setting and be a part of this remarkable project.”