Have imaging device, will travel 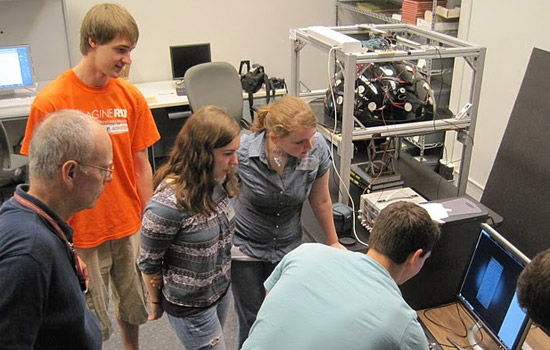 Maggie Castle and her team use their imaging device to map an original 18th century Manchu prayer board print block housed at the Boston Public Library. Stuart Walker, the library’s book conservator, at far left, watches as the students operate the instrument. Standing, left to right, are Kevin Dickey, Castle, Scarlett Montanaro and Dan Goldberg.

Little did Maggie Castle know that the end of her first year in the imaging science program at RIT would end in a field trip to the Boston Public Library.

Castle won a $3,000 grant from the Chester F. Carlson Center for Imaging Science to fund the trip and test the imaging device she and her classmates designed and built during the yearlong Freshman Imaging Project.

Castle and her team took the device on the road to the Boston Public Library, where alumnus Tom Blake ’93 (professional photographic illustration, BFA) digitizes objects from the library’s collection to put on the Internet.

Blake, who had read about the students’ imaging device in RIT: The University Magazine, thought the Boston Public Library would be an ideal venue for trying out the device. And being an alumnus, Blake wanted to help out the students.

“I wanted to invite them in to give them the opportunity to work with interesting material,” Blake says. “They walked in, set up and didn’t ask for much. We were left with polynomial texture map files. I look forward to displaying them on our website.”

“Our main goal was to take polynomial texture maps of many of the artifacts and historical documents Tom provided us with to see what worked and what didn’t with our device, and how we might improve it in the future,” Castle says.

Blake brought the students a sampler platter of artifacts to image, including ancient cuneiform tablets, the original masthead of The Liberator newspaper, a Mongolian prayer board, two death masks and a page of the Gutenberg Bible.

“It was an awesome experience to be working with such amazing artifacts,” Castle says. “Not everyone gets to hold a real cuneiform tablet in their hands or see the death masks of Sacco and Vanzetti up close.

“Many of the objects that we took PTMs of had a lot of great texture, which made for great PTMs,” Castle says. “You can’t show a PTM with a picture,” Castle says. “It is an interactive image, not a still one. Tom Blake was really excited about the PTMs we created for him because he wants to show his colleagues that there are more ways to digitize and document the artifacts in the library besides just a still picture.”