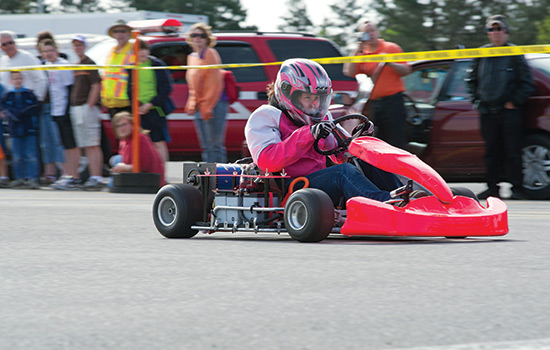 The e-dragster team captain is aptly named Ferrari. The driver of the speedy electric vehicle raced cars and motorcycles growing up.

They are part of the nine-member, all-female Hot Wheelz team that went 100 meters in just under six seconds to win the E-Dragster Race at this year’s Imagine RIT: Innovation and Creativity Festival. More than a dozen teams competed in the electric-powered vehicle drag race against RIT President Bill Destler on May 5.

Students from the Women in Engineering program used a light-weight go-cart chassis fitted with six AGM-lead batteries to power the 72-volt, 10-horsepower motor to give them the edge in the competition.

The team chose an antique banjo from Destler’s personal collection instead of $1,000 for the grand prize, saying the banjo was a trophy in itself, something they could keep and display to remember the victory.