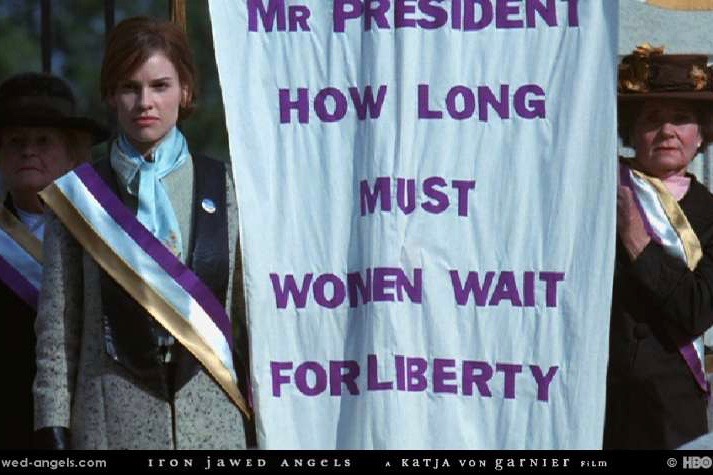 Would you starve for the right to vote? Early 20th century women’s suffrage leader Alice Paul did. She and other suffragists used hunger strikes to amplify their demand for enfranchisement.

An HBO film about Paul and the suffrage movement, Iron Jawed Angels, will be the focus of a campus discussion and part of RIT’s centennial celebration of the 19th amendment and women’s voting rights, Moving Forward: Suffrage Past, Present, and Future.

RIT associate professor Tamar Carroll, co-chair of the Moving Forward committee with Twyla Cummings, associate provost and dean of graduate education, invites the RIT community to join her class, “U.S. Women’s Gender and History,” to discuss the historical film and the issues it dramatizes. The class discussion will be held from 10 to 11 a.m. Oct. 30. RIT participants may use RIT Libraries’ streaming accessing to view Iron Jawed Angels prior to the class discussion.

“My students have focused on the women’s suffrage movement, and we talk a lot about the meaning of voting rights and why people would be willing to participate in something as serious as a hunger strike over the right to vote,” said Carroll, chair of the history department.

The 2004 film portrays Paul, played by Hilary Swank, and other members of the social movement who borrowed hunger strikes from British suffragists. This form of civil disobedience would later inspire British colonial subjects in Ireland and India.

“Iron Jawed Angels is a compelling film,” Carroll said. “I think it captures the real drama and the real sense of struggle that suffragists genuinely did feel by juxtaposing contemporary music with this historical moment that the film is trying to depict.”

Iron Jawed Angels does take liberties with history, she noted, especially in depicting Paul as a heterosexual woman romantically involved with a man.

“Alice Paul might call herself ‘queer’ today,” Carroll said. “Her life was centered around other women in the way that Susan B. Anthony’s life was. I’m interested in the director and film maker’s decision about why they felt the need to portray her as heterosexual.”

The film does convey the excitement of the protest and what was at stake, she added, and portrays Paul as a savvy strategist who organized the first picketing of the White House.

“They’re the first social movement to use photos and to get the press to cover them,” Carroll said. “They were able to spread their message that way. Alice Paul worked closely with other women, and together they were brilliant at publicity.”

Anyone interested in joining the class discussion should view the film Iron Jawed Angels, streaming available through RIT Libraries, prior to Oct. 30, and contact Tamar Carroll at tamar.carroll@rit.edu for a link to the Zoom discussion.