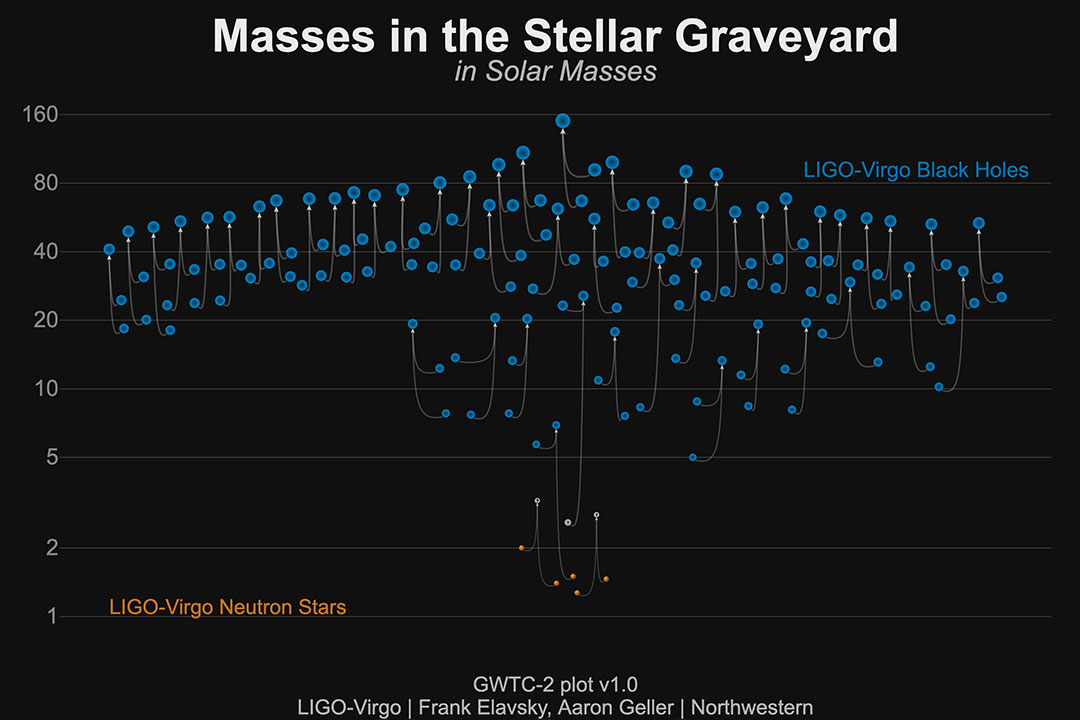 The LIGO Scientific Collaboration and Virgo Collaboration released a catalog of results from the first half of its third observing run (O3a). This shows the masses of the black holes and neutron stars in the 50 gravitational wave events detected to date.

The LIGO Scientific Collaboration and Virgo Collaboration released a catalog of results from the first half of its third observing run (O3a), and scientists have detected more than three times as many gravitational waves than the first two runs combined. Gravitational waves were first detected in 2015 and are ripples in time and space produced by merging black holes and/or neutron stars. Several researchers from Rochester Institute of Technology’s Center for Computational Relativity and Gravitation (CCRG) were heavily involved in analyzing the gravitational waves and understanding their significance.

Jacob Lange ’18 MS (astrophysical sciences and technology), ’20 Ph.D. (astrophysical sciences and technology) worked on the parameter estimation part of the analysis, which identifies important characteristics about each gravitational wave event, including the masses of the black holes or neutron stars involved, their spin, distance from Earth and position in the sky. While he was a Ph.D. student at RIT, he helped develop parameter estimation algorithms that were faster than conventional methods and used for many of the events released in the catalog. Lange, who is now a postdoctoral researcher at Brown University’s Institute for Computational and Experimental Research in Mathematics, said that improvements to the sensors and parameter estimation techniques have yielded increasingly unique findings that challenge our understanding of the universe.

“We’re seeing much more complex events where nature’s really showing us its fascinating side,” said Lange. “We’ll be able to learn much more interesting physics and astrophysics from these detections. The more we build up this catalog of events, the more we can start making statements about the overall population.”

Daniel Wysocki ’18 MS (astrophysical sciences and technology), ’20 Ph.D. (astrophysical sciences and technology) worked on analyzing the population properties of black holes following O3a. Wysocki, now a postdoctoral researcher at University of Wisconsin–Milwaukee, said that we are gaining a clearer picture about what typical black holes look like, how many exist, how the population of black holes has changed as the universe evolved, and other important properties.

“This catalog represents a significant increase in sample size from our previous release,” said Wysocki. “It’s like a census that provides data for people to see if their physical models are consistent with what happens in the universe. This has implications for general relativity, the physics of stars, and the behavior of matter at energies that aren’t possible in a terrestrial laboratory. Down the line that can really help us change our understanding of things on Earth.”

With incremental improvements coming online in the next several years, new ground and space observatories in the coming decades, and LIGO and Virgo preparing for the fourth observing run, the future is bright for gravitational wave astronomy. Associate Professor Richard O’Shaughnessy, a member of CCRG and the LIGO Scientific Collaboration, said even more discoveries are on the horizon.

“We’ve learned more about what nature permits,” said O’Shaughnessy. “We found more big black holes, smaller siblings of the massive event described in the summer and we found, too, that large black holes can be rapidly spinning. That breaks some theories for how large black holes could form. We see very tantalizing suggestions that some of the merging black holes may have spins misaligned with the orbit.”

Speculating about the significance of these observations, O’Shaughnessy said, “Many years ago, I showed that misalignment could clearly identify how merging black holes came to be. We’re one step closer to finding a smoking gun.”