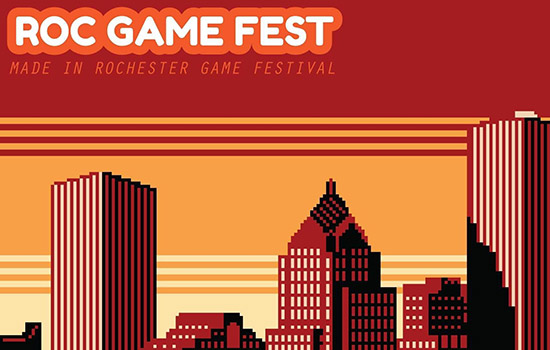 Rochester Institute of Technology’s Center for Media, Arts, Games, Interaction and Creativity (MAGIC) and the Irondequoit Public Library will be co-sponsoring the Made in Rochester Game Festival on Saturday, Sept. 30.

The free event—open to the public—will be held at the library, 1290 Titus Ave., from noon to 5 p.m. Participants are encouraged to play games created by local game developers. This is the first year the festival is being held and it is one of the only big game development events in Rochester.

Event organizers are encouraging people to stop in, play games and offer their feedback. Twenty-five games created by local college students, faculty and game developers will be available to play, and if gamers build up an appetite, there will be a La Petite Poutine food truck on site.

John Scalzo, a librarian at the Irondequoit Public Library and a 2003 RIT graduate, conceived this idea because he saw value in local game developers sharing and showcasing their projects.

“Rochester doesn’t have any kind of game development convention, and I thought that was really unfortunate,” said Scalzo, a graduate of RIT’s information technology program. “Since I’m in a position where I could fix that and arrange new events like this, I decided to dive in and try to organize this festival.”

“It can be hard to get out and show people your game. It’s not like a performance piece where you can get up and perform and show off at a venue,” said Mostyn. “This festival will help bypass that issue.”

RIT’s MAGIC Center is a university-wide research and development laboratory and a production studio that assists in efforts to bring digital media creations up to marketplace standards and commercialization. Faculty, staff and student researchers, artists and practitioners come together to create, contextualize and apply new knowledge in a multitude of related fields and disciplines as appropriate not only to STEM or the arts and humanities, but their intersection. RIT’s MAGIC Spell Studios, which will open a new building in fall 2018, focuses on nurturing and growing new companies and publishing and distributing their projects.

Another reason Mostyn and the MAGIC Center gravitated toward this event is that RIT is one of three Digital Gaming Hubs in New York state named by Empire State Development.

A community event such as the Made in Rochester Game Festival perfectly aligns with RIT’s Gaming Hub objective, according to Mostyn.

“I like taking the idea of ‘eating locally’ and applying it to digital games. If you like digital games, why not support the developers right in your backyard?” said Mostyn. “My dream with this festival is that it will raise awareness and further the narrative that games are being made in Rochester and we have a lot of incredible resources and assets right here in the city to become a real player in the industry.”

Mostyn and Scalzo hope to make this an annual collaborative event.