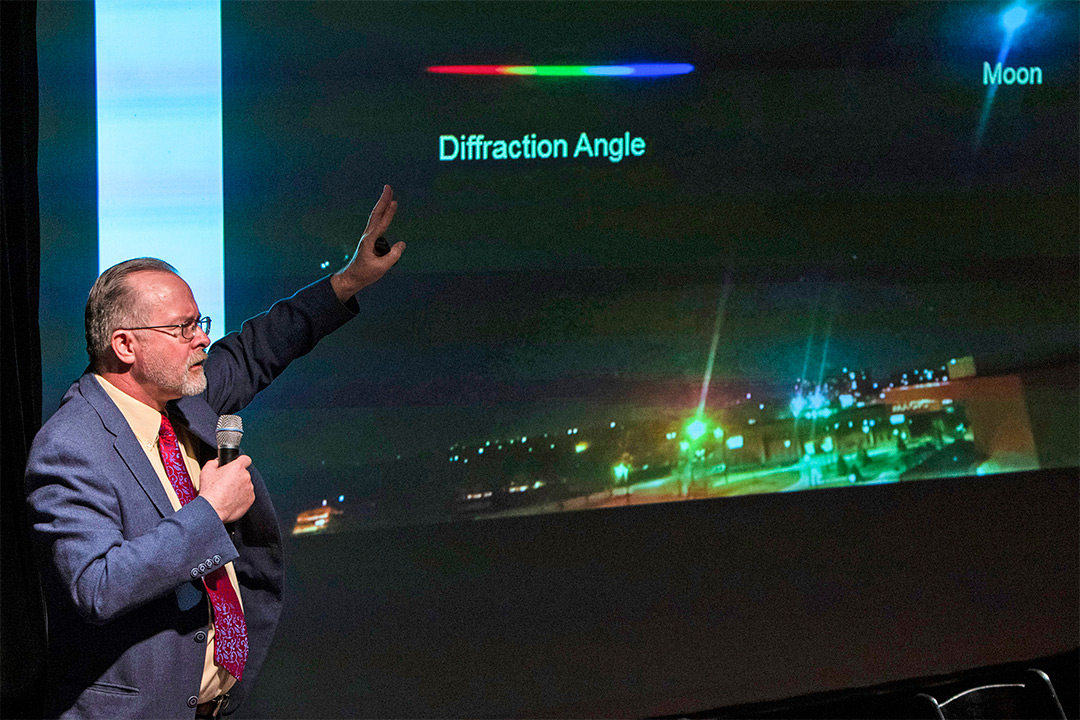 RIT Professor Grover Swartzlander discussed his work on diffractive solar sails at the NASA Inventive Genius lecture series at the Chicago Museum of Science and Industry in April.

Scientists have been floating designs for solar sails to propel spacecraft for decades, but a new approach being developed by a Rochester Institute of Technology professor could be the key to helping spacecraft photograph the poles of the sun for the first time.

NASA announced it is providing RIT Professor Grover Swartzlander a Phase II award through its NASA Innovative Advanced Concepts (NIAC) program to explore the feasibility of diffractive solar sails over the next two years.

“We’re embarking on a new age of space travel that makes use of solar radiation pressure on large, thin sail membranes,” said Swartzlander. “The conventional idea for the last 100 years has been to use a reflective sail such as a metal coating on a thin polymer and you unfurl that in space, but you can get a force based on the law of diffraction as well. In comparison to a reflective sail, we think a diffractive sail could be more efficient and could withstand the heat of the sun better. These sails are transparent so they’re not going to absorb a lot of heat from the sun, and we won’t have the heat management problem as you do with a metallic surface.”

Swartzlander is developing the diffractive solar sails using optical films made from metamaterials, which are engineered to have properties not found in naturally occurring materials. This approach allows the sails to have a lower mass and substitutes mechanical navigation with electro-optic beam steering, which is more efficient and less prone to breakdowns.

“The National Academy of Sciences is continuously asking for more missions that will help understand the physics of the sun, and this could be an important part of that,” said Swartzlander.

Swartzlander conducted a nine-month Phase I NIAC study in 2018, which culminated in an incubator meeting in Washington, D.C., to create a roadmap for advancing metamaterial sails on low Earth-orbiting satellites called CubeSats.

Several space-based missions have demonstrated solar sail technology in space and NASA's Near-Earth Asteroid Scout (NEA Scout) mission is expected to be the first operational mission to use a reflective solar sail. NEA Scout is a six-unit CubeSat that will fly into space on NASA's Orion spacecraft as part of Exploration Mission-1.