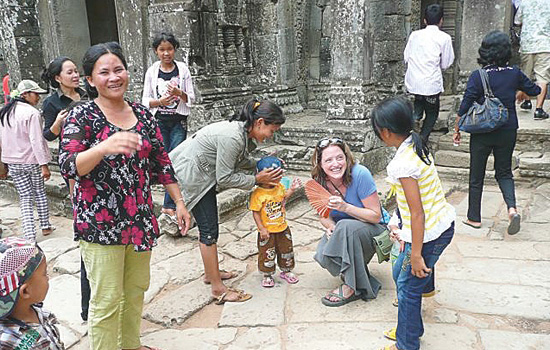 Christy Smith, kneeling, is greeted by natives in Siem Reap, Cambodia, during her trip to eight countries for Discovering Deaf Worlds in 2007.

In 2003, Christy Smith became the first deaf contestant on the CBS reality show Survivor. She spent more than a month living in the Amazon jungle.

Since then, she has worked as a motivational speaker, taught sign language and developed a television show called Christy’s Kids to encourage children to challenge themselves.

Working as a camp counselor in her native Colorado, Smith met David Justice, a Rochester native who was interpreting at the camp. Together they formed Discovering Deaf Worlds, www.discoveringdeafworlds.org, in hopes  of empowering and advocating for deaf people around  the world.

“We became friends and discovered we both have a passion for traveling and wanted to travel the world,” she says. “We wanted to discover what was happening for deaf people around the world. There was not much on the Internet. But we learned 80 percent of deaf people in developing countries have no education at all.”

They spent a year visiting eight countries and earlier this year produced a documentary, Discovering Shuktara, about a home for 18 children with multiple disabilities in India. The documentary has been shown in several film festivals around the world.

“They were all abandoned or ran away from abusive homes. Some of them were eating rats to survive,” she says with her head down as she regains composure. “Shuktara gives them a second chance at life.”

She says the trip showed her that advocacy, education, awareness and employment are greatly needed.

“We want to help fill that need,” Smith says. “I found my career. I want to make a difference on a global level.”

A 2000 criminology and sociology graduate of Gallaudet University, Smith has made Rochester her home and is now enrolled in NTID’s secondary education master’s degree program.

“I want to inspire, educate, motivate them to keep learning,” she says. “I’m here to be able to learn the skills to work with children who have no education at all. I’m understanding how children acquire language.”

Discovering Deaf Worlds has added a third partner, Davin Searls, an English tutor at NTID; a return trip to India is in the works for March.

And next summer, Smith plans to attend a 10-year anniversary Survivor castaway party in Catalina Island in California. She says she’s humbled and shocked that people still recognize her, even though some can’t recall where they’ve seen her before.

“The biggest goal that I live by is keep making a difference,” Smith says. “I’m blessed with all that I have, and all my experiences. So I want to be able to pass that on to other people to have the same opportunities and experience. I’d like to think even if you take Survivor away, I’m still a role model. I’m just who I am, and it’s my personality. I’m driven.” 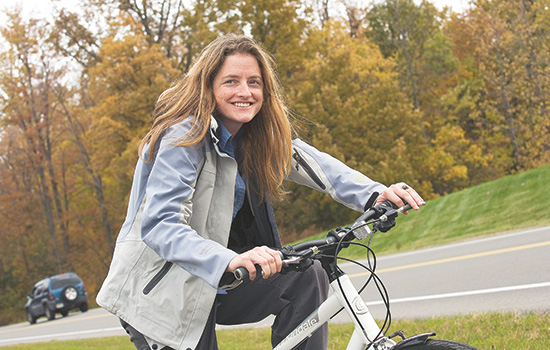 Christy Smith strives to make a difference. A. Sue Weisler