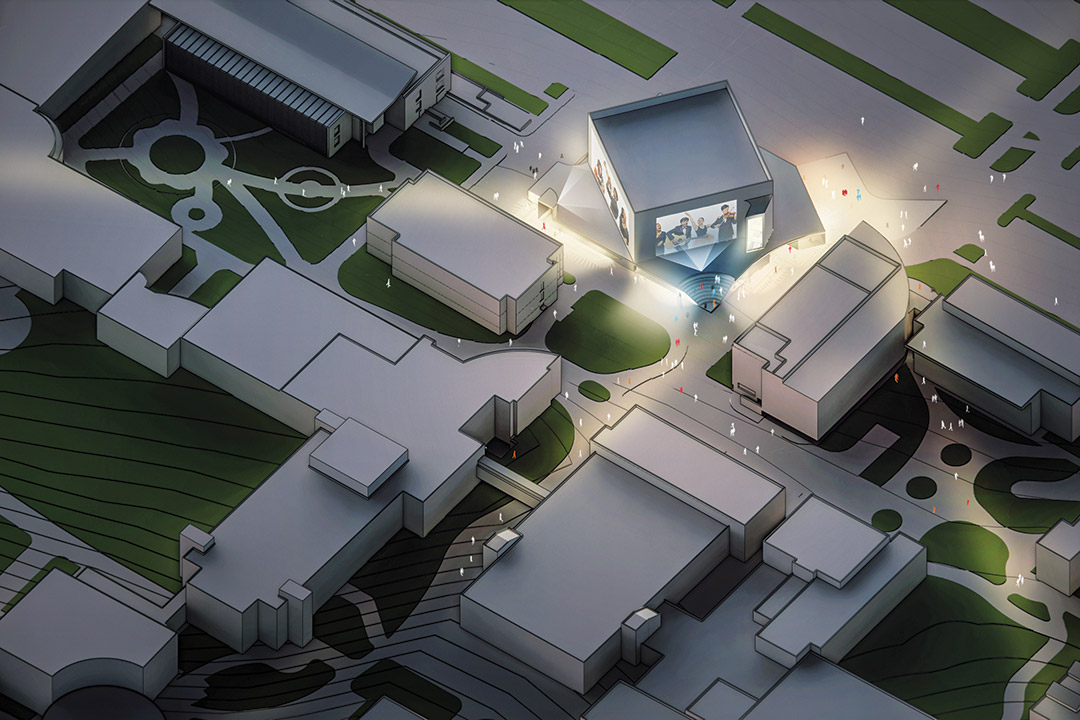 The first theater in the Performing Arts Center will feature 750 seats, pictured in this rendering. Construction is expected to begin this fall.

Plans are being developed to build a performing arts center that will feature a 750-seat theater and, in a second phase, a 1,500-seat orchestra hall for larger audiences.

The project is intended to provide more practice and performing venues for the RIT community as well as options for community groups to hold concerts, talks, and other events.

RIT intends to develop the leading performing arts program in the nation for non-majors, attracting talented and creative students who can continue their passions for music, dance, theater, and other performing arts.

James Yarrington, RIT’s university architect and director of Planning and Design Services, said the complex will be erected adjacent to Institute Hall and Engineering Hall.

Construction on the 750-seat theater, designed for musical theater but useful for a range of programming, is expected to begin in the fall of 2021, with a completion date of fall 2023.

Yarrington said it will be more than 40,000 square feet, three stories tall and have truck access. It is expected to have two balconies and feature a historic, restored theater pipe organ. It will also have costume and scene shops, as well as offices.

Yarrington said the Rochester area has numerous theaters that can seat a couple hundred audience members, but there are few options for venues that seat between 700 and 1,500 people. By comparison, the Robert F. Panara Theatre in Lyndon Baines Johnson Hall has 440 seats.

The first phase comes with an estimated $40 million price tag—part of the approved capital bond project. Additional funds will be sought to restore and install the pipe organ.

The second phase, which is funding dependent, will feature an expanded lobby and more than double the size of the building with a 1,500-seat theater and a stage big enough to accommodate a large philharmonic orchestra, major events, and lectures.

The Los Angeles-based firm of Michael Maltzan Architecture, which has designed performing arts buildings for other clients, is the design architect.

The architect of record is SWBR, a local company that also was involved in construction of the MAGIC Center.