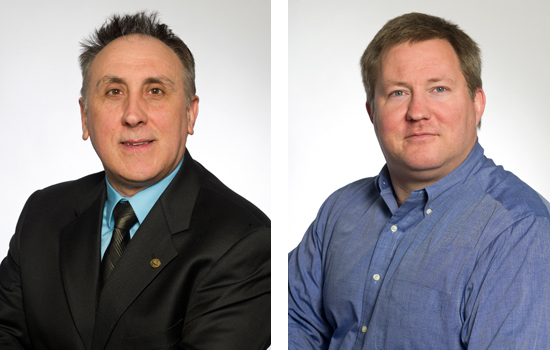 Rochester Institute of Technology professors have developed a faster, more accurate way to assess gravitational wave signals and infer the astronomical sources that made them.

“It is the first time numerical simulations of binary black holes are used directly to estimate the parameters of a binary and, in this paper, it is proved that this can be done to the highest accuracy,” Lousto said.

A validation study of the method is being done by Lange, a Ph.D. student in RIT’s astrophysical sciences and technology graduate program. “Our approach compares waveforms directly to numerical relativity simulations to reanalyze the first gravitational wave detection,” he said.

“Most of the interesting information arrives at the end where the black hole does its most wild motions and all the cool physics of Einstein’s theory really comes to the fore,” said O’Shaughnessy, assistant professor in RIT’s School of Mathematical Sciences. “We think by simulating the most interesting part and attaching the simple part, we’ll be able to do some really interesting science that is not possible any other way.”

RIT scientists played a key role in the LIGO Scientific Collaboration’s landmark discovery. Their simulated signal independently verified the observed waveform produced by the black hole merger and helped confirm Einstein’s general theory of relativity. This new study demonstrates the role of simulated signals in the analysis of gravitational waveforms.

“These simulations are what we have leveraged for all these years to get all the insight we have about how black holes merge and their gravitational radiation,” O’Shaughnessy said. “They are the most complete and accurate models of binary black-hole coalescence.”

Simulations of black holes with different masses and spins that match, or which are oddly aligned, require the complex mathematics of Einstein’s strong field equations. O’Shaughnessy collaborated on the data pipeline with Lousto, a leader in the field of numerical relativity, who simulates black holes scenarios on supercomputers.

“Richard’s method allow us to avoid the intermediate step and is faster and more accurate,” said Lousto, professor in RIT’s School of Mathematical Sciences and fellow of the American Physical Society. “The method always improves itself because with every new simulation, it adapts. It can only get better.”

Lousto’s simulations apply the computational techniques from the 2005 landmark research he conducted with Campanelli, director of the RIT’s Center for Computational Relativity and Gravitation and a member of the LIGO Scientific Collaboration, and Zlochower, associate professor in RIT’s School of Mathematical Sciences.

Scientists at RIT's Center for Computational Relativity and Gravitation use the world’s fastest supercomputers to solve Einstein’s equations for general relativity. The binary black-hole system in this video is one of the longest ever simulated. The two black holes complete 48 orbits before they merge into a single remnant black hole. This system also displays an interesting phenomenon called a “flip-flop,” in which the spin of one of the black holes switches directions over the course of the evolution. The simulation are based on the work published in two Physical Review Letters articles: http://journals.aps.org/prl/abstract/ and http://journals.aps.org/prl/abstract/. Credit: RIT's Center for Computational Relativity and Gravitation