Relishing in the process of invention 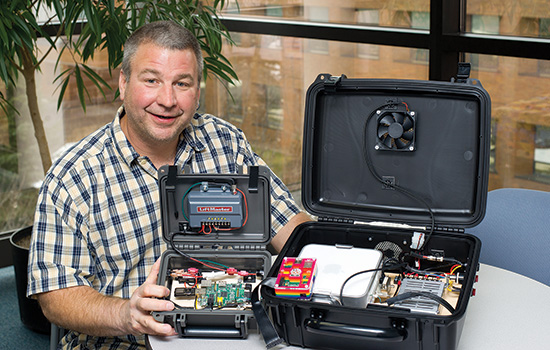 Professor Carl Salvaggio and his son,  Phil, a doctoral student in imaging science, built a digital music player for their car because they could. They programmed  a Raspberry Pi electronic interface— a $35 general-purpose computer the  size of a deck of cards—to play a random selection of their favorite music from a thumb drive.

For the Salvaggios, making a digital music player had less to do with the  music than the process of invention.  After all, they could have hooked up  their iPods instead.

“I had more fun making them than actually using them,” says Carl Salvaggio, professor in the Chester F. Carlson Center for Imaging Science. “Now they’re just part of what a car ride is. I canceled my Sirius and XM service because I replaced it with this. But most of it was being able to work together. It’s fun to build something. We don’t do that enough anymore.”

The music player sits in a small box  n the trunk of his son’s car. A larger  prototype using a Mac-Mini instead of  a Raspberry Pi board is in the back of Salvaggio’s car. The original model  requires a power supply and a fan.  The Raspberry Pi version streamlines  the Salvaggios’ idea in a more robust package powered by the car’s ignition.

“We wanted to make a little computer that, when you turn the car on, boots  up and reads music off a thumb drive,” Salvaggio says. “It scans the thumb drive, finds and randomly orders your music, and then starts playing it. The whole  idea was to put it in the trunk so you  don’t have to interact with it at all.  So you’re not distracted driving.”

They programmed the Raspberry  Pi to look for a signal coming from an  old garage door opener to skip to the  next song.

“You still have that little bit of a  distraction from hitting the garage  door opener, but it’s not like fumbling with your iPod,” Salvaggio says.